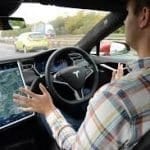 Germany: How will automated and conventional vehicles interact in the transition period to fully automated vehicle fleets? How can this coexistence be managed and how will future transport models look like? The European research project CoEXist, in which the PTV Group is also involved, is dealing with those questions. After 18 months of work, the multidisciplinary team of 15 project partners has now reported its first major success: The transport modelling software is “automated vehicle-ready”.

Thus, one of the main objectives of the three-year project, funded by the Horizon 2020 framework program of the European Commission, has been achieved. The PTV research team worked closely with partners from Renault, the French institute Vedecom, TASS International and the University of Stuttgart, supported by the Swedish National Road and Transport Research Institute, the city of Helmond in the Netherlands and the University of Florence, Italy. Thanks to this cooperation, simulations were run, enabled by the connection of the control logic of autonomous vehicles from Vedecom, the TASS International software PreScan and the microscopic simulation software PTV Vissim.

Also, field data were collected on the test track in the city of Helmond were TASS International organized a three-day data collection session in a real traffic environment. Furthermore, the data and the car-following behaviour of automated vehicles (AV) were analyzed. Based on these results, new features were released in the PTV simulation software and the recommended values were published. Additionally, the results were used by the University of Stuttgart to develop macroscopic modelling scripts.

“CoEXist is an outstanding research project focussing on an important future topic”, said Prof. Dr. Christoph Walther, Head of Global Research at PTV Group. “With this important milestone, we have paved the way to AV-modelling.”