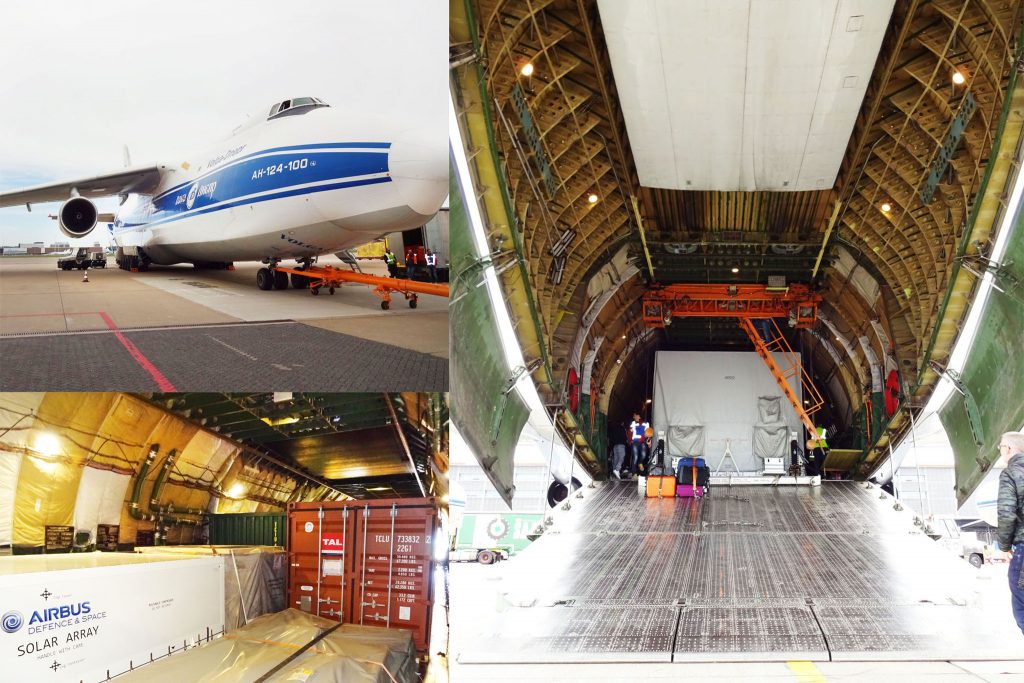 The Netherlands: After years of development the BepiColombo spacecraft which will be heading to Mercury from autumn 2018 has at last taken to the air. On 23 April 2018 the first elements of the BepiColombo hardware were loaded into an Antonov An-124 cargo plane for transport from Amsterdam´s Schiphol Airport to the European Spaceport Kourou in French Guiana. After a fuelling stop in the Azores Islands the Antonov will arrive early on 24 April. This Antonov flight was the first of four flights needed to transport the spacecraft and all handling and test equipment to Kourou. The flights are supported by three transports by ship for further items.

Having completed a comprehensive test programme at European Space Agency´s Technology Centre ESTEC in Noordwijk (The Netherlands) the BepiColombo spacecraft is almost ready for launch. Between May and October 2018 the final launch preparations will be performed so that the spacecraft can then be launched aboard an Ariane 5 ECA.

BepiColombo is Europe’s first mission to Mercury. It will set off in autumn 2018 (launch window is open from 5 October to 29 November) on a journey to the smallest and least explored terrestrial planet in our Solar System. When it arrives at Mercury in late 2025, it will endure temperatures in excess of 350 °C and gather data during its one year nominal mission, with a possible 1-year extension.

BepiColombo is an interdisciplinary mission performed in a partnership between ESA (European Space Agency) and JAXA (Japan Aerospace Exploration Agency). The BepiColombo mission involves the delivery of the MPO (Mercury Planetary Orbiter) and the MMO (Mercury Magnetospheric Orbiter) to complementary orbits around the planet Mercury. JAXA provides the MMO, whilst Airbus is prime contractor for ESA, providing the MPO and all other spacecraft hardware. The scientific payload is provided by national agencies.