France: Following an agreement signed in 2016, ESA and the Vatican Apostolic Library have presented the preliminary results on how they are using the same method to manage their respective long-term data preservation projects and how this can create new initiatives. For more than 500 years, the Vatican Apostolic Library has been preserving, protecting and restoring a patrimony of manuscripts and books. Now, with the benefit of today’s technological era, the Library is digitalizing…(Read More)

US: The Federal Aviation Administration (FAA) has begun expanding an automated system that will ultimately provide near real-time processing of airspace authorization requests for unmanned aircraft (UAS) operators nationwide. April 30, 2018 – Beginning today, the FAA is phasing in a nationwide beta test of the Low Altitude Authorization and Notification Capability (LAANC) that will deploy the system incrementally at nearly 300 air traffic facilities covering approximately 500 airports…(Read More)

Finland: Nokia has acquired SpaceTime Insight to expand its Internet of Things (IoT) portfolio and IoT analytics capabilities, and accelerate the development of new IoT applications for key vertical markets. Based in San Mateo, California, with offices in the U.S., Canada, U.K., India and Japan, SpaceTime Insight provides machine learning-powered analytics and IoT applications for some of the world’s largest transportation, energy and utilities organizations, including Entergy, FedEx…(Read More)

NetSpeed and Esperanto partner to power SoCs for AI

US: NetSpeed Systems and Esperanto Technologies have announced that Esperanto has licensed NetSpeed’s IP and intelligent design environment for its Supercomputer-on-a-Chip for Artificial Intelligence (AI) applications. Esperanto’s 7nm chip will integrate thousands of RISC-V compatible processors each with vector/tensor accelerators and all connected with NetSpeed’s NoC IP. AI applications demand new architectures to meet the need for unprecedented performance, sophisticated functionality…(Read More)

US: FARO, the world’s most trusted source for 3D measurement and imaging solutions for 3D factory, construction BIM, product design, and public safety forensics, today announced that it has made a strategic minority investment in present4D GmbH, a leading software solutions provider for professional virtual reality (VR) presentations and training environments. “We are very excited to have present4D as a strategic partner, which is uniquely positioned to drive adoption of virtual reality…(Read More)

US: DJI, the world’s leader in civilian drones and aerial imaging technology, and Microsoft have announced a strategic partnership to bring advanced AI and machine learning capabilities to DJI drones, helping businesses harness the power of commercial drone technology and edge cloud computing. Through this partnership, DJI is releasing a software development kit (SDK) for Windows that extends the power of commercial drone technology to the largest enterprise developer community…(Read More)

US: NanoRacks has announced that the Company has been awarded the launch services and deployment contract for the Canadian CubeSat Project – a nationwide small satellite development program sponsored by the Canadian Space Agency (CSA). The project provides funding to post-secondary institutions in Canada as part of a challenge to design, build, launch, and operate their own satellites which will be deployed from the International Space Station. The contract is for the launch…(Read More)

US: Prismatic’s PHASA-35 solar-powered High Altitude, Long Endurance Unmanned Aerial Vehicle (HALE UAV), which has the potential to fly for up to a year before needing maintenance, has moved closer to operation following a new agreement between two cutting-edge British companies, BAE Systems and Prismatic. Engineers from Prismatic and BAE Systems will collaborate on the development of the new solar-powered High Altitude, Long Endurance (HALE) UAV known as PHASA-35…(Read More)

US: Trimble has announced that it has added Crop Health Imagery and Work Orders features to its Trimble Ag Software. The software is a desktop, cloud-based and mobile-enabled agricultural solution that simplifies farm data management to drive productivity, profitability and sustainability for farmers, crop advisors, ag retailers and food processors. After launching the agriculture software two years ago, Trimble has paid close attention to customer feedback. As today’s farms continue to grow in size…(Read More)

Italy: By 2025 every public contract will be designed with BIM. As per the Ministerial Decree 560/2017, in Italy the use of Building Information Modeling for public works will become mandatory. It is a complex target for contracting that calls to re-examine the traditional design processes and increase the integration between disciplines. The Bank of Italy, who runs major institutional real estate assets, is addressing this profound transformation. The adoption process of the BIM method…(Read More)

GPS and Galileo working together will make the world more precise 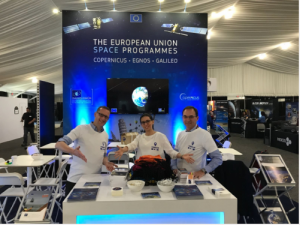