New Delhi, India: Realising the importance of environmental information in sustainable development and the need for a systematic spatial database on natural resources and socio-economic profile as a planning pre-requisite, the Union Ministry of Environment and Forests of the Government of India published the Interactive State of Environment Atlas of India (SOE) in association with Development Alternatives. To make the 2010 edition of SOE, slated to be released in early 2011, more interactive and user friendly, Development Alternatives organised a workshop here. 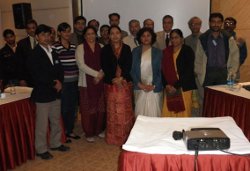 Elaborating on the workshop, Dr. George C Varughese, President, DA said “The objective of this workshop is to seek inputs and suggestions for improvement in content and structure of the SoE Atlas – India. DA aims to make the new Atlas more user friendly and useful.”

In his opening remarks, Nilkanth Ghos, Advisor, Ministry of Environment and Forest, Government of India, explained that the key idea is to develop an atlas with environment information system at the core and to incorporate socio-economic information as a value-added service. He said that environment information is a vital tool for the decision making process. He expressed disappointment that in spite of the launch of State of Environment Report Scheme in 2002, the data at state level is very weak. So, more than 80 percent data in the atlas have been fetched from the centre.

Anand Kumar of DA, elaborated on the activities of the organisation and informed that DA has completed the updation for the year 2010 with the selected new themes and data with the support from the Ministry. There are total 80 themes in new atlas. 13 themes have been updated and 12 news themes have been introduced.

“The SoE Atlas consists of a dynamic website comprising of series of categorised easy-to-read maps indicating the status of the environment, supported by brief write-ups in the appropriate sections and relevant data so that they can be shared easily and quickly amongst government agencies, international donors, the private sector and civil society. The unique feature of the website is Pressure – State – Impact – Response (PSIR) framework analysis i.e. all the maps are presented and displayed in PSIR analytical framework. A multimedia CD-ROM containing the SoE – Atlas has also been developed which will provide flexibility and versatility for users to visualise environment and socio-economic data using simple GIS functionalities,” he said.

Some of the functional capabilities of the Atlas are pan, zoom and refresh feature; query response service; and scale dependent display of features.

The workshop concluded with suggestions from users like demand for map on surface water flow, coastal maps and pollution maps.