East View Geospatial has expanded analytic services in the South China Sea for foundation data and satellite imagery. The South China Sea serves as an international crossroads of culture, commerce and security interests, with 20 percent of the world’s population residing within 100 kilometres from the region, the company says.

Contested by multiple nations with territorial claims, the South China Sea harbours natural resources, as well as geopolitical significance. About one-quarter of the world’s traded goods are delivered through the Strait of Malacca, which is located in the South China Sea between the Malay Peninsula and Sumatra.

In addition to authoritative foundation data, with increased satellite data feeds from imagery providers, East View can now image the South China Sea on a consistent basis. From the Fiery Cross Reef, to the Strait of Malacca, analysts can detect the change for area hotspots or monitor the region as a whole at preferred intervals.

With access to real-time and archived imaging data, East View Geospatial also offers anticipatory and trend analysis services. Analysts can monitor a specific object of interest, such as a group of Filipino fisherman or Chinese vessels, and analyse past imagery of similar targets to anticipate new developments and future possibilities. 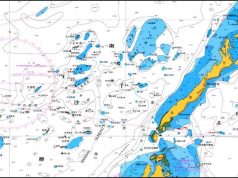