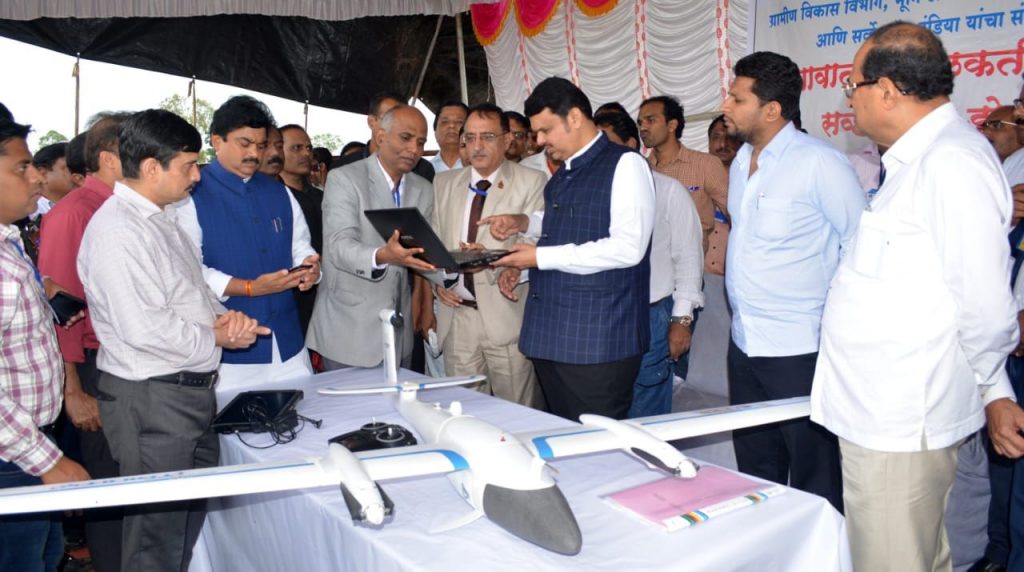 India: Survey of India, the national mapping agency of the country under the Ministry of Science & Technology has signed an MoU with Department of Revenue & Land Records, Govt of Maharashtra to undertake the Large scale Mapping of Village Gaothan (Aabadi)  areas in the State of Maharashtra using drones.

Chief Minister of Maharashtra, Shri Devendra Fadnavis inaugurated the Drone-based Mapping Project being carried out by Survey of India at Nimgaon Korhale in Ahmednagar district on 31st July, 2019.

Minister of Rural Development, Women and Child Welfare Pankaja Gopinath Munde; Surveyor General of India Lt Gen Girish Kumar, VSM; Commissioner Revenue & Land Records; Commissioner Rural Development and Secretary, RDD from Govt of Maharashtra along with other officials were also present during the launch of the project. This large scale mapping project is being carried out by Survey of India, Min of Science & Technology, Govt of India for Dept of Revenue and Land Records, Govt of Maharashtra using Professional Survey grade Drone covering more than 40,000 Village Gaothan (Aabadi) areas in Maharashtra State.

These village Gaothan areas not been surveyed earlier will be mapped at 1:500 scale covering all land parcels in the village for preparing the accurate revenue maps and GIS database. Drone survey will be pivotal to fix locations of village boundaries, canals, canal limits and roads in these villages.

A detailed presentation about this Large scale Mapping Project was also made in the National Workshop and Conference of Sarpanch and Upsarpanch organized jointly by Department of Rural Development, Govt of Maharashtra and All India Sarpanch Association Shirdi, Ahmednagar district on 31st July. This national conference was organized under the guidance of  CM Shri Devendra Fadnavis, presided by Minister of Rural Development, Women and Child Welfare Pankaja Gopinath Munde and attended by other Ministers, MP, MLAs and other dignitaries. This conference was attended by thousands of Sarpanch, Upsarpanch and farmers across the country and the Maharashtra state.