According to the company, ADS-B, which stands for Automatic Dependent Surveillance—Broadcast, is becoming a standard way for aircraft to share their own location and communicate with other nearby aircraft. It’s more accurate than radar, and lets aircraft automatically do their own air traffic control.

The new technology will allow drone users to see the position, altitude and velocity of nearby manned aircrafts. The drone user can then take necessary action if required. DJI says it’s been hearing for some time that more industrial users need a more industrial drone.

“DJI’s announcement at Mobile World Congress that they will be equipping their drones with plane avoidance technology is a step in the right direction to restrict the use of drones in uncontrolled air space,” said Colin Bull, principal consultant manufacturing and product development at SQS.

DJI calls its version of the tech AirSense: the M200 doesn’t broadcast its own location, but can at least sense when something is nearby. The new drone starts shipping in the second quarter of this year. However, there is no information related to its price, except that it’ll be DJI’s most expensive drone. 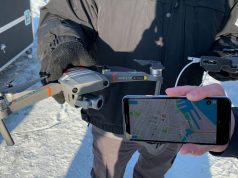