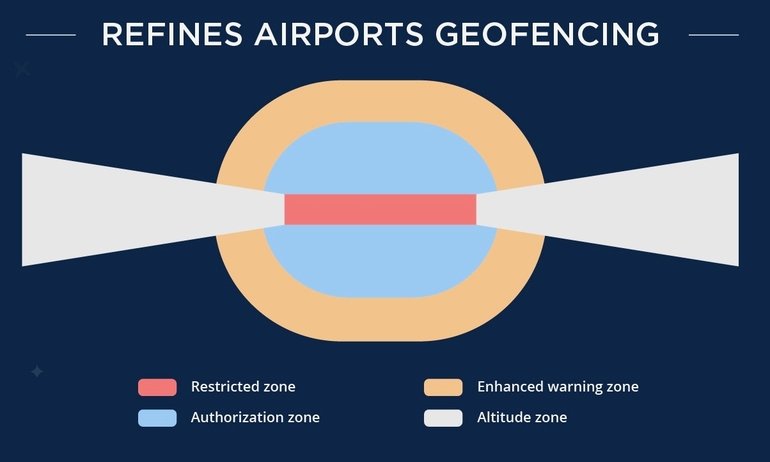 China: DJI is improving its geofencing technology with the launch of its Geospatial Environment Online (GEO) 2.0 system across Europe, bringing state-of-the-art geofencing to a total of 32 European countries.

GEO 2.0 creates detailed three-dimensional “bow tie” safety zones surrounding runway flight paths and uses complex polygon shapes around other sensitive facilities, rather than just simple circles used in earlier geofencing versions. This applies in the 13 countries covered by DJI’s original GEO system, as well as 19 new countries that did not previously have advanced geofencing. The new system better reflects the actual safety risk posed in those areas and is more flexbile in lower-risk areas, for example by permitting authorized users to conduct drone activities in locations parallel to runways.

The revamp of DJI’s GEO system will also include Temporary Flight Restrictions (TFRs) imposed during major events or natural disasters. The TFRs will be based on authoritative data from Eurocontrol.

“DJI is eager to ensure that safety remains the top priority as the European drone industry innovates new ways to use drones in exciting and productive ways. Introducing state-of-the-art safety features in even more countries will help the general public and drone operators alike,” said Christian Struwe, DJI’s Head of Policy, EMEA. “European airspace management must accommodate advanced future operations, such as automated flight and flight beyond the operator’s line of sight, without imposing new burdens on recreational and professional drone pilots who have completed millions of safe and beneficial flights. Altitude Angel supports this vision and supplies the reliable airspace data needed to implement it.”

Richard Parker, Founder & Chief Executive Officer of Altitude Angel, said, “We are honored to partner with DJI on this important update to GEO and look forward to working closely on other important projects. We work hard to deliver the best data and drone services to our customers globally, and we welcome DJI’s recognition of the value in our Guardian platform to enable their customers to fly safely and access more airspace“.

GEO 2.0 in Europe will be phased in starting later this month. DJI customers should update their DJI GO 4 flight control app and aircraft firmware to ensure these improvements are implemented.