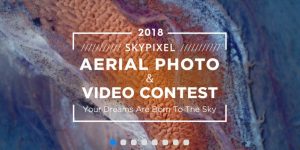 China:  DJI and SkyPixel, the world’s most popular aerial photography community, are kicking off their annual SkyPixel Aerial Photo & Video Contest. Running from December 18, 2018 to February 18, 2019, the contest is a showcase for the world captured from above, and welcomes submissions from professional photographers, videographers, aerial enthusiasts and content creators around the globe.

The 2018 SkyPixel Aerial Photo & Video Contest consists of two storytelling formats, one in photography and the other in video form. There is no restriction on the type or brand of aerial equipment, and participants can submit as many photos or videos as they wish.

Contestants can win a range of prizes, including a Hasselblad X1D-50c camera, DJI Mavic 2 Pro drone and the new Osmo Pocket three-axis stabilized gimbal. In addition, SkyPixel will organize a series of exhibitions at different DJI Flagship Stores in 2019 to showcase the winning pieces. Select work will also be featured and introduced at workshops hosted by winners and professional photographers in conjunction with SkyPixel.

“DJI has redefined how a drone should look like and what it can do. The compact size, portability and powerful imaging system of our drones have also made capturing amazing aerial content easier than ever before. Now anyone can take their creativity and inspirations to the skies,” said Ferdinand Wolf, Creative Director, DJI Europe. “We are seeing more and more aerial photographers and content creators sharing their unique perspectives and stories of the world via SkyPixel. With this contest, we hope to encourage more people to learn about aerial technology, and together embrace this new creative way of storytelling.”

Since 2014, the SkyPixel online community has attracted professional aerial photographers and content creators from more than 140 countries. SkyPixel contests over the past three years have received over 100,000 submissions, a huge collection of extraordinary footage focusing on nature, culture, architecture, and original aerial masterpieces.

Video submissions should not be longer than five minutes and must feature at least 30 seconds of aerial footage.

No matter what categories participants decide to enter, they should always fly with caution, observe their flight environment and follow local regulations at all times.

From these nine categories, SkyPixel and DJI will give away 49 awards, including two Grand Prizes, and nine first, second and third prizes in each category. There will also be 10 Nominated Entries that are selected by a panel of judges and 10 by popular vote, measured by which submissions get the most likes during the contest period. Contest awards include the Hasselblad X1D-50c camera, DJI Mavic 2 Pro, Osmo Pocket and other products worth a total of approximately $120,000 USD.

This year, the judging panel is composed of award-winning directors, photographers and influencers, including Toby Strong, a documentary photographer who has won many Emmy and BAFTA awards, and Ben Nott, one of Australia’s most prestigious directors of photography and an ACS member.