South Korea: The XXIII International Union of Forest Research Organizations (IUFRO) World Congress, “Forests for the Future, Sustaining Society and the Environment,” co-organised by IUFRO and the Korea Forest Research Institute, was held during August 23-28 in Seoul, Republic of Korea. The Congress presented an opportunity to promote understanding of the contribution of forests and forest science to the Earth’s sustainability and find hope for a greener future in Seoul, Korea. Over 2700 participants from international organisations, governments, academia, the private sector and civil society, heard an opening speech by the President of the Republic of Korea Lee Myung-Bak who highlighted the nation’s work on land and forest restoration, suggesting that its experiences can serve as an example of hot advance green growth. 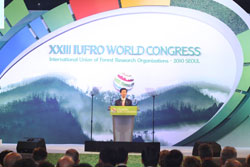 Earlier, welcoming the crowd in several languages, IUFRO President Don Koo Lee urged on green-growth practices to address climate change and a decline in forest cover worldwide. Lee, who in 2008 established “low-carbon green growth” as a national vision, noted that in only two generations his country’s once-barren landscape had been reforested, and called Korea “one example of how we can attain economic growth and protect the environment at the same time.”

Eduardo Rojas-Briales, Assistant Director-General at the Food and Agriculture Organization, called forests a “major variable in managing climate change” while also cautioning that forestry was at a crossroads amid declining revenue and increasing demands. A keynote speech by Frances Seymour, the Director-General, Center for International Forestry Research (CIFOR) in the main plenary focussed on past and future challenges of forest research. Forestry stands at a critical juncture in history, said Seymour. Now is a time when a whole body of research on forests and communities is reaching maturity and a new agenda focused on carbon sequestration has been thrust upon the profession.

Participants also had a chance to brave the elements and experience innovative and inspiring forest-related projects in and around the Republic of Korea. Field trips included excursions to learn about a protected area for biological diversity; non-timber forest products; conservation and utilization of forest genetic resources; forests and human health; sustainable forest management and the ecosystem approach; and the wood processing industry.

The urgency of the world’s environmental problems demands a radical change in mindset, said Jose Joaquin Campos Arce, a keynote speaker. To successfully tackle immense challenges like climate change, environmental degradation, and forest security, the forestry community must “abandon the old way of thinking” – the reductionist approach of breaking challenges into small units and understanding only a small part of a problem. Where some people see local forest users as hindrances to forest preservation, Nobel Laureate Elinor Ostrom sees opportunity. According to her, policy makers must not focus on formal ownership systems as the sole factor affecting forest sustainability, but rather on how to ensure local participation in forest planning.

On the concluding day of The XXIII IUFRO World Congress, in plenary, participants heard a keynote address by Peter Shaw Ashton, Harvard University, on the “disastrous trajectory for the rain forests.” Fifteen technical sessions met as well, along with three sub-plenaries covering IUFRO’s priorities for 2010-2014, forest biodiversity, and decentralization and forest livelihoods in a globalized world. A video montage and vocal accompaniment began the closing ceremony, which included numerous speeches including those of incoming IUFRO President Niels Elers Koch, and closing words from outgoing president Don Koo Lee.