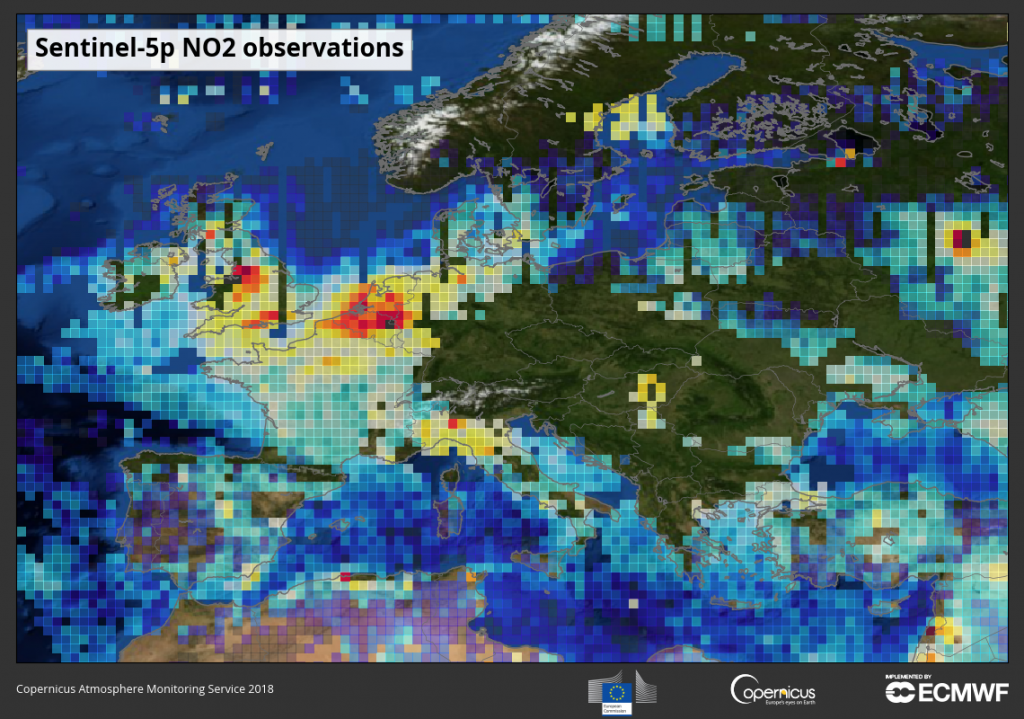 France: With the official release of data from the Sentinel-5P satellite by the European Space Agency (ESA), a wealth of information about air quality is now available for the public. Observations from Sentinel-5P are being processed and analyzed by the Copernicus Atmosphere Monitoring Service (CAMS) and will be ready to forecast air quality and to help with related decision-making later this year.

“Anybody can access the Sentinel-5P data, but it is complex and has to be processed before it is useful for addressing specific questions,” explains Richard Engelen, Deputy Head of CAMS. “CAMS does this processing so that the data user doesn’t have to, by combining Sentinel-5P data with observations from other satellite instruments to provide combined datasets as well as forecasts for the next few days.”

The Sentinels are a fleet of satellites central to Europe’s Earth-observation programme, Copernicus, which addresses six main thematic areas: atmosphere, climate change, marine environment, emergency management, land and security. The Sentinels deliver some of the near real-time data that Copernicus uses to investigate each of these areas. This helps us better understand and manage our planet. Sentinel-5P — the precursor to Sentinel-5 — is the first Copernicus mission dedicated to monitoring the atmosphere.

“We often hear about climate change and the depletion of the ozone layer when we consider why we need to monitor the atmosphere,” says Sentinel-5P mission manager, Claus Zehner. “But air quality is also a huge global problem. It affects the health of humans and influences agriculture and the economy in general.”

Sentinel-5P will provide lots of information about the air we breathe. As with all data provided by the Copernicus Programme, this information is free and open to anyone in the world, better equipping policymakers, scientists and businesses to address the challenges affecting citizens in their daily lives.

CAMS processes data from ground- and satellite-based observations and combines it with state-of-the-art modelling of the atmosphere to accurately estimate the state of the atmosphere every day. This estimate is then used to predict the daily air quality forecast, in a similar way to how the daily weather forecast is calculated. By combining satellite data with models, CAMS also generates consistent global data sets which stretch back decades and can be used to look at worldwide trends, for example in pollution levels.

Sentinel-5P hosts the state-of-the-art TROPOMI (Tropospheric Monitoring Instrument) spectrometer, which maps trace gases that affect our health and the climate, such as nitrogen dioxide, ozone and aerosols. TROPOMI gathers data that will be used to investigate air quality in much more detail than ever before.

TROPOMI will also locate where significant emissions are taking place and what their impact is on atmospheric concentrations of key pollutants. This will help to better mitigate air quality problems and provide better air quality forecasts. Data will be used to inform policymakers and environmental agencies, with the aim of directly benefitting individual citizens, especially those that already suffer from respiratory disease.

Whenever a new satellite is launched, an official commissioning and validation phase precedes operational use. Sentinel-5P has just come out of this phase and is now producing valuable data. During the commissioning phase, preliminary data was evaluated and instruments were calibrated. Early data was compared with the CAMS forecasting system, which allowed detection and solving of “teething” issues.

“TROPOMI, data processing facilities and even the spacecraft itself were extensively tested during the first six months of this mission,” explains Zehner. “For about one month, data from TROPOMI was carefully checked against independent observations to ensure that it was scientifically sound.”

CAMS Senior Scientist Antje Inness further explains, “At present, the data is only included passively in the CAMS system — differences between the forecast model and the TROPOMI observations are calculated routinely, but the data does not yet influence the CAMS forecasts. Assessing the TROPOMI data in this way gives valuable feedback about its quality.”

Engelen adds, “We have been using preliminary Sentinel-5P data in the CAMS global system. Early impressions are excellent and we expect that Sentinel-5P will soon become one of the most important data sources underpinning the quality of CAMS information products”.

CAMS already uses data from a range of European, American and Japanese satellites, but Sentinel-5P offers better accuracy and higher resolution than ever before.

In the future, the geostationary Sentinel-4 and polar-orbiting Sentinel-5 will monitor the composition of the atmosphere. Until then, Sentinel-5P will play a key role in monitoring and tracking air pollution, to help us manage our environment, understand and tackle the effects of climate change, and safeguard our everyday lives. And CAMS will be there to ensure that Sentinel-5P data will ultimately benefit European citizens.

Note: This was originally published on the official website of Copernicus