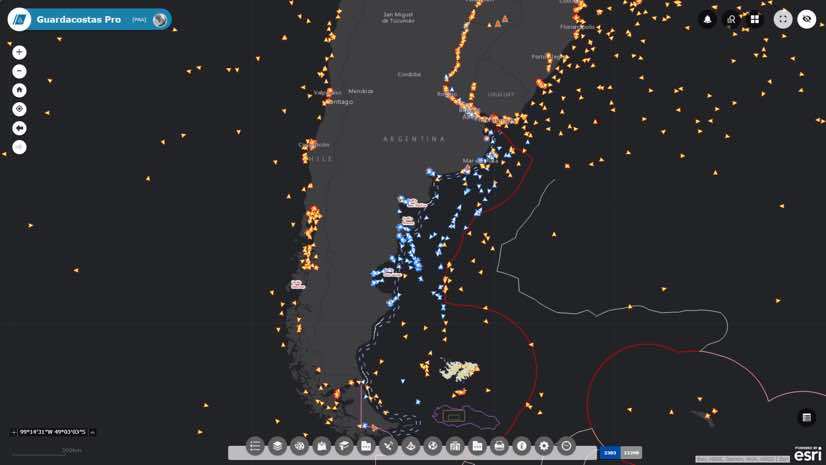 US: Esri, the global leader in location intelligence, has announced that Prefectura Naval Argentina and Aeroterra S.A. have partnered to implement Esri’s ArcGIS platform for a real-time tracking system The new system, called Guardacostas Pro, uses a combination of satellite imaging and signal processing to monitor vessels for illegal activities such as drug smuggling and fish poaching in the coastal waters of Argentina’s exclusive economic zone (EEZ).

As Argentina’s coast guard, Prefectura Naval deploys patrol vessels, helicopters, and airplane spotters to protect its economic interests and to guard against the decline of its fishery. This year, the Guardacostas Pro system allowed Prefectura Naval to track a Spanish vessel that entered the EEZ and attempted to return to international waters. The coast guard was able to catch the ship, which had poached roughly $380,000 worth of fish; escort it back to port; impound it; and fine the crew. The captain had little ground to refute the charges because the coast guard had the data to prove the illegal activity.

“As of five years ago, we had very little information about the use of our seas,” said Ernesto Miguel Klocker, Prefectura Naval director of informatics and communications. “Now we have a good picture, which gives us electronic control of the sea, allowing us to send our air and naval units directly to the places where ships operate.”

Until recently, its primary enforcement tool was constant patrolling and investigation of all ships. Now Guardacostas Pro monitors signals that every vessel transmits to avoid collision and to provide data on vessel type, speed, and location. It combines this with satellite imaging and Esri’s spatial analytics capabilities to give coast guard personnel real-time alerts when a vessel is entering their waters.

“Prefectura Naval is setting a truly cutting-edge example of a forward-thinking organization,” said Dean Angelides, Esri head of international alliances and partners. “The best way to effectively enforce laws over such a large scale as the EEZ is to know exactly where things are happening and when, and Argentina is now leading the way in data-driven public safety.”

After being successfully proven at sea, the Guardacostas Pro system has been moved ashore and is now a multiagency tool to aid Argentina’s Ministry of Security’s homeland security mission. The Ministry of Security will use the system to track and locate its operative units through mobile phones, radio equipment, vehicles with location sensors, and search and rescue aircraft.