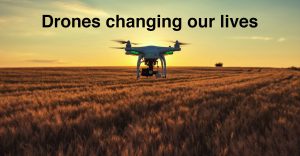 When Amazon first used a drone to deliver its product in December 2016 no one thought that it would be a gigantic step for the drone industry. Drone industry has grown many folds since then. According to a report, there are more than 1 million drone users in the US alone. Let’s try to understand the various use of drones.

The Economic Impact of Unmanned Aircraft Systems Integration in the United States report shows the economic benefit of UAS integration. AUVSI’s findings show that in the first three years of integration more than 70,000 jobs will be created in the United States with an economic impact of more than $13.6 billion. This benefit will grow through 2025 when we foresee more than 100,000 jobs created and economic impact of $82 billion.

Those who wish to get a package, food, medicine or even a beer delivered to their doorsteps via drone might have their wishes fulfilled sooner than expected.

Here are the industries that are benefitting from this new, life-saving technology.

Precision agriculture is a method in which farmers optimize inputs such as water and fertilizer, to enhance productivity, quality, and yield. The term also involves minimizing pests and disease through the spatially targeted application of precise amounts of pesticides.

Precision farming is a farming management concept based on observing and responding to intra-field variations. It relies on new technologies like satellite imagery, GPS, information technology, and other geospatial tools.

What is precision agriculture

Unmanned Aerial Vehicles (UAVs) allow farmers to monitor crop and livestock conditions consistently by air to find problems that would not be visible in ground-level spot checks. An apt example, a farmer can inspect whether his crop is not being properly irrigated through time-lapse.

Many companies are investing in precision farming technologies like software, sensors and aerial-based data.

With the improvements in precision and accuracy of GPS technology over the years, soon drones will be able to operate more precisely and safely within centimeters, compared to meters.

Drones have become vital for disaster management. We lose connectivity [be it road or communication] during a disaster. Images captured by drones of a disaster-affected area can be used to navigate first responders and gives a crucial edge to the emergency services in cases where every minute counts.

Disaster relief agencies can also allocate money based on examinations of the extent of devastation in an area. Drones can quickly reach to the difficult terrain and can be used to supply first aid, medicines, and food after a disaster.

Zipline, a drone delivery company in Rwanda has been successfully delivering blood and medication to interior areas which are not well connected.

Images captured from drones post any calamity can be used by insurance sector to ascertain the extent of the damage. Same is being used by many insurance companies in case of drought or flood to compensate the farmers.

The ocean is critical to human existence — the source of 97 percent of the planet’s water and producer of more than half of the oxygen in the atmosphere — it may come as a surprise that 85 percent of the ocean’s surface remains unmapped and unexplored.

Aerial imagery is playing a crucial part in bridging that gap. High-resolution photos from aircraft camera systems can capture and retrieve surface current data and measure Doppler shift in waves. This method is cost-effective, timely and scalable; it can cover large surface areas.

Oil and gas industry can benefit a lot from this. These companies can use the captured data to plan and execute offshore exploration, conduct deep-water drilling operations, reinforce oil spill response and mitigation, and assist in search-and-rescue missions.