Time and again, the importance of geospatial information and technology has been emphasized for achieving the 2030 Agenda for sustainable development. 2015 marked the end of the monitoring period of the Millennium Development Goals (MDGs), bringing with it the strategic framework for the 17 Sustainable Development Goals (SDGs). The 17 goals are aligned with the common goal of providing enhanced governance for development and shaping a better future. For the same, space technology for SDGs plays a vital and pivotal role.

Space Technology for SDGs in ASIA

Asia’s vastness and it’s topographical diversity has made it succumb to the undue pressures on natural resources, severe environmental pollution, ecological degradation, human health, etc. To deal with the harsh reality, at the recently concluded 24th Asia Pacific Regional Space Agency Forum (APRSAF) held in Bangalore, India, the crucial role of space technology for SDGs was conferred. The key deliberations at the conference centred on the need for efficient space infrastructure, space policy framework, space research and innovation and the subsequent role of the multi-stakeholders who are at the centre of development (government, academia, industry, and citizens).

Furthermore, a comprehensive panel discussion at the conference brought together the space leaders of many Asian countries – documenting and discussing their space strategy for SDGs. What was strikingly fascinating was that even though all countries differ in their national development priorities, space strategies, space capabilities, yet, the zeal and enthusiasm of the leaders to use space technology for SDGs remain the same. The representatives of all countries agreed unanimously on making space technology for SDGs a national priority for it is projected to bring a quantum leap in tracking, implementing and monitoring efforts.

Let’s look at few of the Asian economies focussing on space technology for SDGs:

The Vietnam National Space Centre (VNSC) along with the Vietnamese government is dedicated to achieving the national challenges that are protruding the country. The primary focus of the country continues to be (related to) Agriculture, Water and Climate Change. VNSC is working dedicatedly to ensure that space technology is used to address these challenges. By and large, at present, Vietnam takes high-resolution satellite imagery from various sources such as Landsat, Sentinel, ALOS-2, VNREDSAT-1, among many others. The country plans to use the datasets so collected and includes it in its Data Cube Platform which is set to be launched in 2018. The Data Cube Platform, Vietnam’s core data architecture for earth observation data, will ensure that data sets are easily, and freely available for users so that multiple applications can be created without any further delays. The space centre, in itself, is primarily focussed on creating abundant in-house applications for Forest, Water and Rice monitoring. Further on, the data sets are also going to be used to analyse the changing climate layer in the country. With this, the country aims to proactively target five of the seventeen sustainable development goals – Goal 2: Zero Hunger, Goal 13: Climate Action, Goal 15: Life on Land, Goal 6: Clean Water and Sanitation and Goal 14: Life below water, in the coming three to five years. 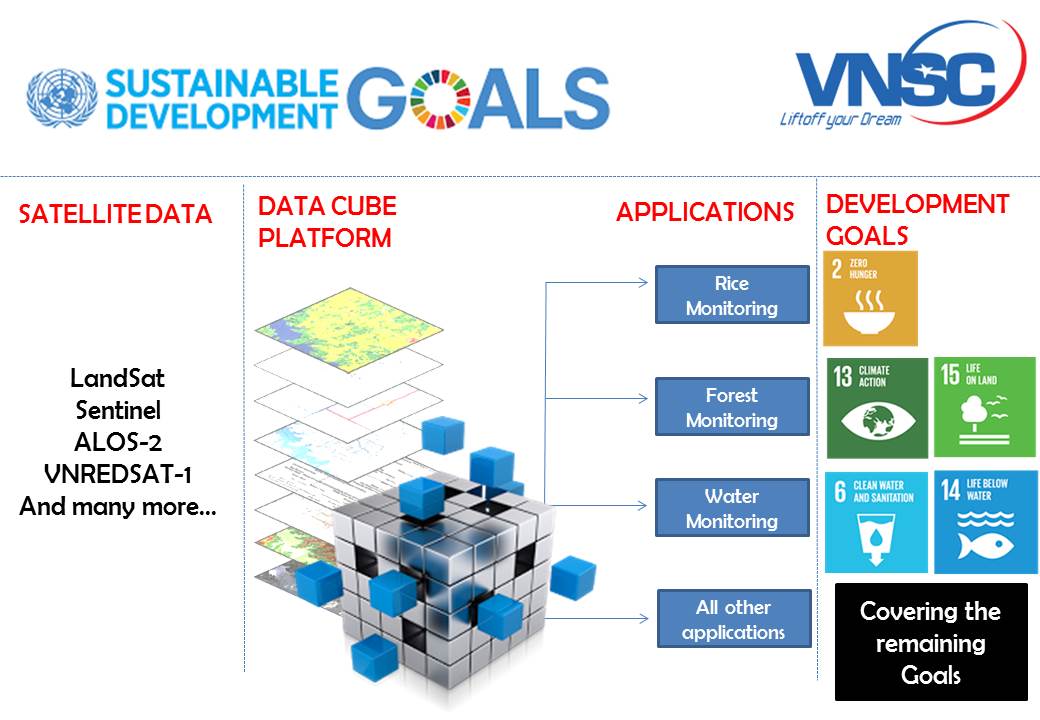 The Malaysian government just like every other government is working towards the 2030 Agenda for Sustainable Development. Presently, SDGs and space technology have been given their due importance in the Transformation plan of 2050 (Transformasi Nasional (TN50)). Understanding that space technology is crucial for SDGs and helps embrace the goals in a ‘systematic and measurable manner’, the national space agency, ANGKASA, lays emphasis on ‘accessibility to space technology’ which shall lead to the desired environment and economic growth. Prioritizing Earth Observation and GNSS as the two most important instruments, the country has identified 5 core SDGs. Earth Observation technology is deemed necessary for Goal 13: Climate action Goal 15: Life on land, and Goal 12: Responsible consumption and production while the gradual use of GNSS will bring positive development for Goal 9: Industry, innovation and infrastructure and Goal 11: Sustainable cities and communities of the future. The country is dedicatedly working towards making space technology for SDGs a national priority, through international engagements, research and development, and multi-stakeholder, participatory governance structure. The country has also established a National SDG Roadmap to guide the implementation of the 2030 Agenda accordingly. 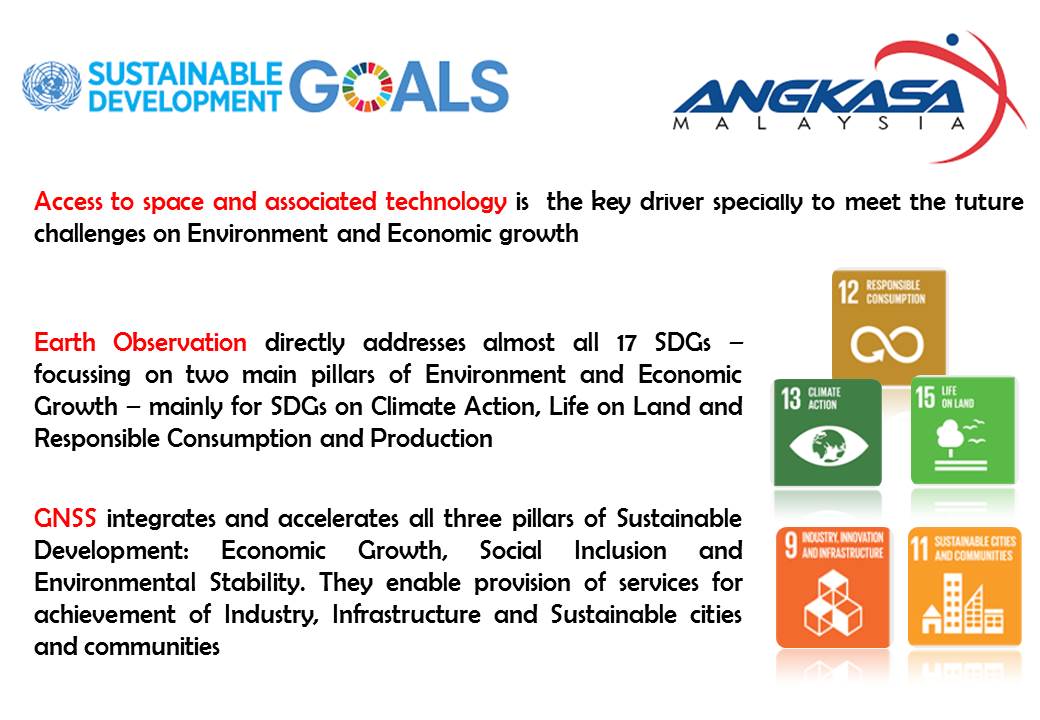 In January 2016, in consultation with 26 government ministries and agencies, the Korean Government established the Third National Basic Plan for Sustainable Development. The plan envisions a ‘harmonized development of environment, society and economy’, focussing on 14 strategic targets inclusive of integrated and safe society, inclusive economy and global prosperity. The Korean Aeronautical Research Institute (KARI), the Korean space agency, is dedicated to the realization of at least 7 of the 17 goals using space technology. The goals have been prioritized according to Korea’s context and three space programs (academia/technology) have been identified for meeting these goals. 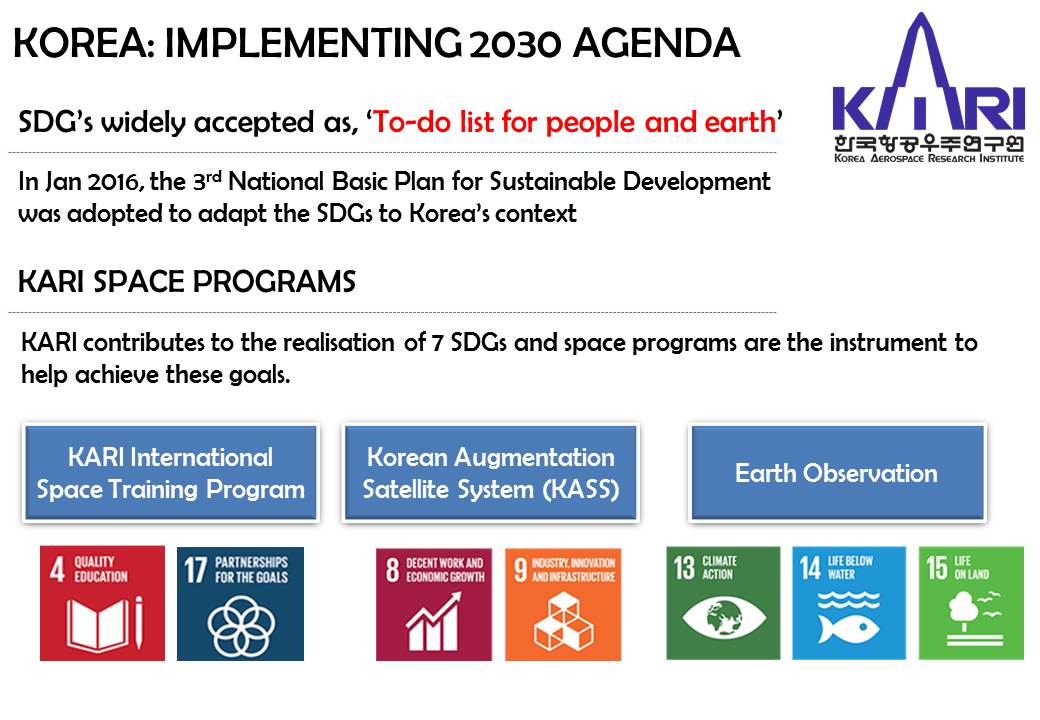 The KARI International Space Training (IST) Program invites participation from government officials, engineers, and researchers who work in the space sector. Lectures in this program are on space policy, launch vehicles, space exploration, etc. The program invites national and international applicants and successfully focusses on Goal 4: Quality Education and Goal 17: Partnerships for the goals. Furthermore, the Korean Augmentation Satellite System (KASS) contributes to economic productivity and improving infrastructure quality. The SBAS brings a 3m positioning accuracy, thus helping in monitoring and achieving Goal 8: Decent work and economic growth and Goal 9: Industry, Innovation and Infrastructure. Lastly, earth observation satellites are being vigorously used in Korea to meet Goal 13: Climate action, Goal 14: Life below water and Goal 15: Life on land. At present, CHOLLIAN satellite is being used to monitor floods, fires, etc., thus improving the emergency response time. Furthermore, looking at the important role space technology can play in managing the SDGs; KARI is planning to launch 2 geostationary satellites in 2018 and 2019 for the meteorological mission and the ocean monitoring mission.

Even before the formulation of the 2030 Agenda for Sustainable Development, Japan was committed to using space technology in an integrated manner for national development efforts. Presently, the country aims to become a role model in the implementation of space technology for achieving the SDGs. For the same purpose, Japan restructured the 17 SDGs in light of its national context – identifying eight priority areas which almost cover the 17 sustainable development goals. The objective of the national government is to ensure that all the stakeholders of the development community, government, academia and research are in agreement and the set targets can be achieved through Public Private Action for Partnership (PPAP). 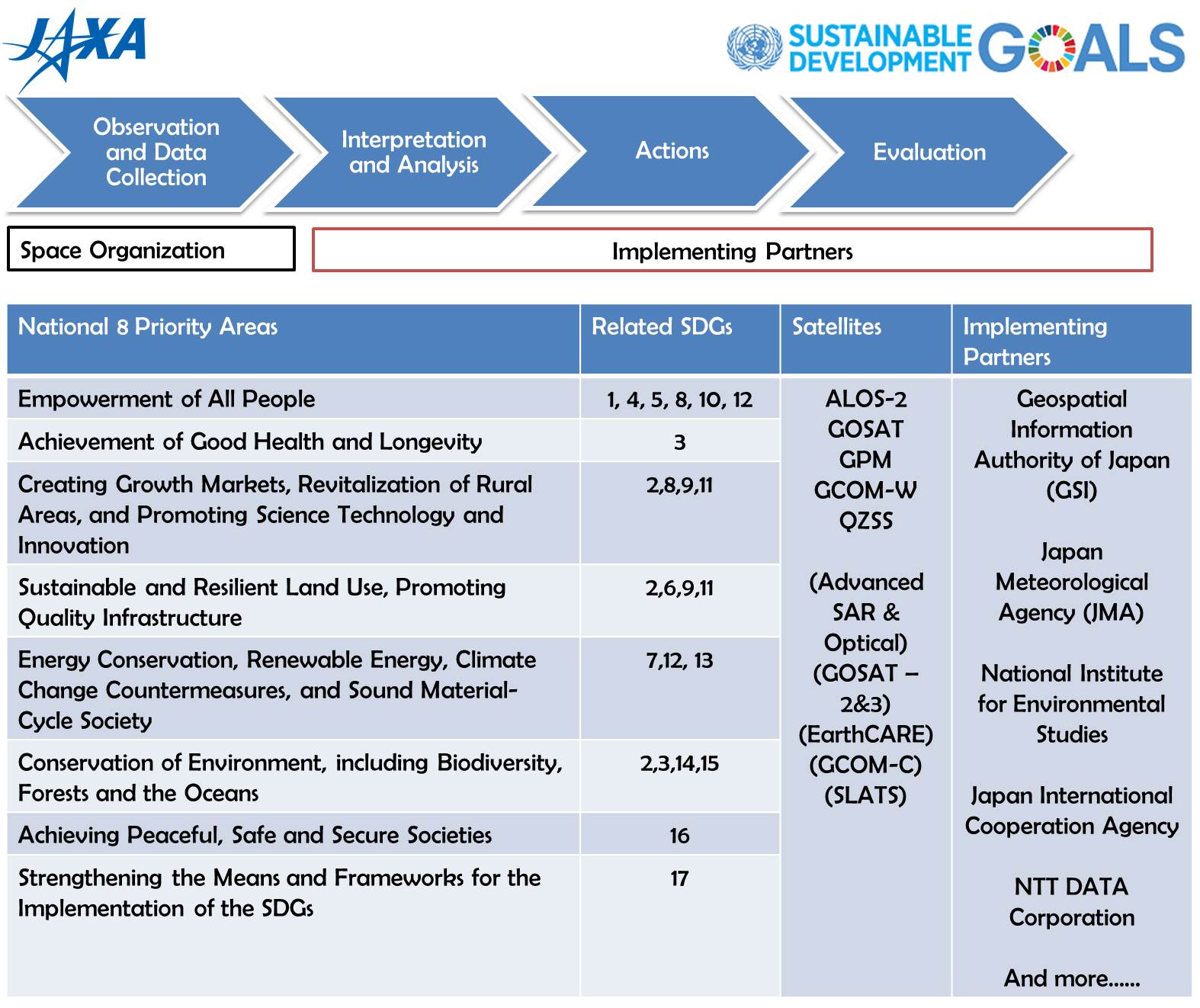 In addition, the role of space technology for the monitoring and management of the selected 8 priority areas has been debated and discussed and a conclusion has been drawn. The space organization i.e. JAXA and its associated partners are playing a decisive role in leveraging space technology to provide reliable and accurate data and information to the relevant stakeholders. From using earth observation satellites to Japan’s own Satellite Based Augmentation system, Quasi-Zenith Satellite System (QZSS), the country brings together multiple stakeholders to contribute to the SDGs. With cooperation from international agencies and national partners such as Geospatial Information Authority of Japan (GSI), Japan Meteorological Agency (JMA), NTT Data Corporation (Private), among many others, the country plays a leading role in engaging space technology for SDGs. In his speech at the 24th APRSAF, Dr. Naoki Okumura, President, Japan Aerospace Exploration Agency (JAXA), stressed that the SDGs cannot be achieved without international collaboration and the role of the private sector participation cannot be downplayed. In this regard, Government of Japan and JAXA encourage collaborations and partnerships among public and private entities to enhance research, innovation and infrastructure in the space technology domain so as to address the SDGs with ease.

India, Thailand, Indonesia and Russia, are the other countries that are focussing on using space technology for SDGs. However, the strategy differs, but the goal remains one – to collaborate, innovate and make efficient use of space technology to meet the 2030 Agenda for sustainable development.

What is the strategic importance of Geo-for-SDGs?

Why is data revolution critical for achieving the SDGs?