A team of researchers has created maps of the United States‘ contiguous megaregions — clusters of interconnected cities — by studying the commutes of American workers. The project started in a bid to solve the geographical problem of delineating conceptual areas of megaregions, a problem which the geographers and cartographers have always faced.

To come out with the map, Garrett Nelson of Dartmouth College and Alasdair Rae of the University of Sheffield used census data on more than four million commuter paths and applied two different analyses, one based on a visual interpretation and the other rooted in an algorithm developed at MIT. The results and their maps appear in an open-access journal of PLOS ONE.

The map above shows all the commutes of 50 miles or less (represented by straight lines between the start and end points) surrounding the San Francisco Bay Area, one of the more iconic megaregions in the country.

The map shows short, high volume commutes in yellow, and the longer lower volume paths in red. Through the map, one can understand that the main centres of work are in the cities. This applies on cities like San Francisco, Oakland, San Jose, and Sacramento, which are highly connected. 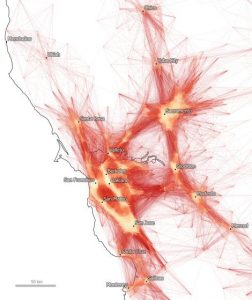 But the questions arise where should planners draw the edges of a megaregion encompassing this activity? Or which connections are statistically significant? Which are important for regional transit planning? Should they focus on the cities surrounding the bay, or is Sacramento just as important to the Bay Area economy?

To answer these questions, Nelson and Rae used the MIT’s algorithm-based tool that is designed to mathematically recognize communities. The algorithm only considers the strength of connections between nodes (more than 70,000 census tracts in this case), ignoring physical locations.

The results of the algorithmic analysis took some clean up and iterations—such as eliminating super long commutes between places like New York City and Los Angeles and excluding nodes with only very weak connections—to produce a coherent map of plausible megaregions.

The difference between the visual and mathematical approaches can be seen in the map above of the Minneapolis-St. Paul area.

In the visual analysis on the left, activity clearly centers on the twin cities and extends outward concentrically, with weaker connections to surrounding cities. But where does the twin-cities megaregion end? Should St. Cloud be included? What about Rochester?

In the smaller-scale map on the right, the algorithm assigned a broad swath of smaller surrounding cities, including Fargo, North Dakota, to the megaregion based on commuting paths. Here, the twin cities area shows up as the largest of multiple centers of activity.

One of the decisions the researchers made was to limit the algorithm to 50 megaregions, which can be seen in the map above, where every node is colored according to the region it belongs to.

This made the map more plausible visually. While 50 may sound like an arbitrary number, it makes sense mathematically because a very high percentage of commutes lie entirely within a megaregion relative to paths that cross boundaries between regions.