In the era of GPS, just felt like writing about an interesting sport that keeps the charm of paper-based maps alive. Yes, I am talking about ‘orienteering’. It is a sport wherein participants use a map and compass to navigate from point to point in diverse and usually unfamiliar terrain whilst moving at speed. 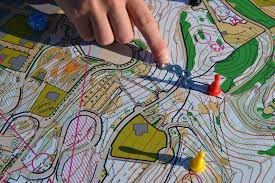 Participants are given a topographical map, which they use to find control points. Originally a training exercise in land navigation for military officers, orienteering has developed many variations. Currently, it is catching up as an exciting outdoor activity among university students.

The term ‘orienteering’ was first used in 1886 at the Swedish Military Academy Karlberg and meant the crossing of unknown land with the aid of a map and a compass. The competitive sport began when the first competition was held for Swedish military officers on 28 May 1893 at the yearly games of the Stockholm garrison. The first civilian competition, in Norway on 31 October 1897, was sponsored by the Tjalve Sports Club and held near Oslo. The course was long by modern standards, at 19.5 km, on which only three controls were placed.

While we were busy thinking the era of paper maps is about to get extinct and technology like GPS will only be showing us the way forward, the increasing popularity of a sport involving map and compass among the Generation Y is surely an interesting leap.

The activity is surely an adventurous one that gives an adrenaline rush. It’s like getting into a lost world, looking for clues and making it to the destination.  The thrill intensifies as teams with similar maps compete to reach the spot. While you need to be intelligent enough to decipher the clues on the map, a good understanding of geography is necessary to excel.

When paper maps are almost losing their importance and shine, orienteering is an excellent way to make the Generation Y remain grounded with the basics.  After all, the location technologies we all use readily today owe their origin to these beautiful markings on paper.

Annotations in maps – story-telling in an interesting avatar