Space, the separator, is disappearing from the novelty of Space as we hurtle into the era of NewSpace. Like most other ‘newwords’, it is a catchy way of describing yet another disruption that is happening in the area of space technology and applications. This disruption is fed by the commercialization of space ventures from launching to applications. Dare we call it the democratization of Space? We could if it meant the easy access of Space to the common person. So, before you start searching for the next shuttle to Mars for your vacation it might be a good idea to examine what is new in NewSpace. 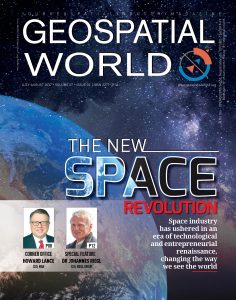 For one thing, it is all about commercial reusable launchers and small satellite using COTS hardware, which results in lowering of costs thus opening the field to many more players other than the government institutions and high net worth individuals. Looking at it from the geospatial viewpoint what will it mean? Will data become cheap? I think not. Private players have to first create value for their shareholders and that will come from data sales. Is data a commodity that can be grown, sold, purchased and consumed? Does it have a shelf life? If so, what is the opportunity cost of data lying in archives unused? As the US and other experiences show, a business model based on data sales is not viable unless there is a strong government backing in terms of assured purchases.

For Geospatial NewSpace not to come to a cropper the key will be in value addition. Today, just imagery is not enough. Non-imaging data which may be structured or unstructured, which is collected purposefully or opportunistically, also presents a huge treasure trove to be mined. Technologies like the Cloud, Big Data analytics, deep learning, and blockchain can be used on heterogeneous data ensembles to yield actionable information. This will be the model to rely on and this also constitutes a part of the NewSpace effort. How will imagery data producers enter this field? Will they grow these capabilities in-house or will they form consortiums? Will there be third party developers who will make profit on the value addition in the form of Apps (another interesting ‘newword’)? In the end, their business viability will depend on what they bring to the marketplace, at what cost and under what regulations.

The marketplace is not uniform. As Greg Scott and Abbas Rajabifard point out in their paper on “Sustainable development and geospatial information: A strategic framework for integrating a global policy agenda into national geospatial capabilities,” while the developed countries have an embarrassment of riches in terms of data, the vulnerable communities suffer from the lack of it. In such an unequal scenario how do we see NewSpace developing? Many NewSpace entrepreneurs at this end of the market are working on solutions like crop insurance, disaster management, forestry, etc. which they hope to sell to government entities rather than individuals. These entrepreneurs are not bound by national boundaries. They are part of an international consortium which covers space technologies, financial services, and brick and-mortar industries.

Costs, accessibility, and regulations governing these solutions will play an important role in such NewSpace solutions. Commercialization will also mean copyrights and patents which may limit the spread of such solutions. One needs to look at the pharmaceuticals market to get a picture of a possible future or one could be optimistic and hope for a ‘NewCreativeCommons’ in the future. In any case, most governments are not equipped to deal with the disruption likely to be caused by NewSpace. There are no policies which govern the entry of private industry as independent players in space technology and applications. In fact, many governments deny certain classes of spatial data to their citizens in the name of national security. Will they allow solutions based on such restricted data?

All said and done, NewSpace is exciting, just as Space was so excited a few decades ago when it was new.