Geospatial technology is ubiquitous and has the potential to transform operations in multiple sectors. Be it our day-to-day activities or cutting edge futuristic research, geospatial is an essential part of everything. Some of the new geospatial trends could take the modern day tech to a completely different level in the near future. One such trend is miniturization of sensors. From bee-sized drones to mini satellites, small is becoming the new big in the geospatial world. Let’s have a look. 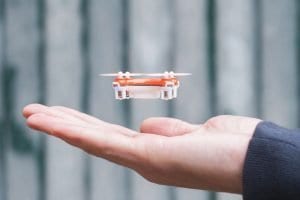 With chips getting smaller by the day, sensors have grown both in terms of efficiency and cost-effectiveness. This has also made the technology more popular and accessible.

If we look back, democratization and consumerization of geospatial started with smartphones. Today, almost everyone carries a GPS-enabled smartphone and a majority of smartphone owners use their device to get direction to their desired destination.

Location is a crucial part of geospatial industry. GNSS (Global Navigation Satellite System) and positioning technologies segment accounted for an estimated 59.4% of the total geospatial market in 2018. The growth of GNSS technology along with increase in demand for precise location information means that today’s location market is bigger than ever.

According to the latest report from the European GNSS Agency, or GSA, the global installed base is forecasted to increase from 5.8 billion GNSS devices in use in 2017 to almost 8 billion in 2020. This means more than one GPS device per person on the planet.

What started initially with smartphones has now reached the fields of LiDAR, Earth observation, small satellites, among others. With time, the scope and demand of the technology will only increase.

Cost cutting is at the core of almost all business operations and the focus is shifting from big to small. The satellite industry is no exception. Gone are the days when satellites as big as buses, costing millions and taking months to build, were in demand. From nano, pico and CubeSats to microsatellites, small satellites are fast becoming the first choice for Low Earth Orbit science, research and earth observation missions.

Planet revolutionized the satellite market after it launched satellites as big as breadboxes using off-the-shelf parts. Today, satellites as small as chipsets are being developed and launched. In the last seven years, 663 commercial smallsats have been built, over 80% of them for remote sensing. Over half of them have been built by Planet, and over 75% have been by Planet and Spire.

Spire already operates about 80+ cubesats and has the ambition to provide a persistent view of about 97% of Earth with a constellation of 150 satellites.

Small satellites are not only low in mass, but are also significantly less expensive to build and deploy. For instance, the famous February 2017 launch by ISRO saw PSLV carrying a record 104 satellites to orbit, 88 of which were Planet Doves and 8 were Spire Lemurs. This year on January 25, the ISRO PSLV-C44 launch successfully injected Microsat-R and Kalamsat V2 satellites into their designated orbits. The pint-sized Kalamsat V2, being termed world’s smallest satellite, was designed and built by students at a cost of 1.2 million rupees (16,900 dollars). The 4-cm cube satellite weighs just 1.2 kg and can be held in the palm of the hand.

Currently, the space industry is undergoing a dramatic transformation. With the demand for data going up, companies the world over are working to launch constellations of hundreds or thousands of smaller, less expensive satellites in low and medium Earth orbits. The number of less-than-500-kg satellites launched in the coming decade would surpass 7,000, as compared to 1,187 in the 10 years ending 2017, according to an estimate from Euroconsult.

Drones, or unmanned aerial vehicles (UAVs), as they are commonly referred to, have been around for a long time. However, their size has shrunk, but efficiency has enhanced, over the years. Also, drones have become a lot more affordable. According to experts, if autonomous drones the size of bumble bees have to be built, then everything, including the chips that control them, needs to be smaller. Researchers at MIT, who in 2017 designed a tiny computer chip tailored to help honeybee-sized drones navigate, shrunk their chip design even further in 2018. The new computer chip measures only 20 square millimeters.

DJI, considered to be a pioneer in UAVs, makes mini drones small enough to fit in the palm of your hand. Even though tiny, these devices have signature technologies and stabilized frames. Because they are small, they can be easily flown indoors, making their way through narrow corridors and performing delicate maneuvers effortlessly. Last year, DJI unveiled its foldable drone, the Mavic Air, which is about the height of your average smartphone. The Mavic Air is the company’s smallest drone ever. The device is capable of a variety of features, the coolest being “Asteroid”, which creates a 32-megapixel 360-degree panorama that can be pulled back and viewed as a “planetoid”.

From commercial requirements to security needs, today, drones are being used everywhere. Norwegian company Prox Dynamics is providing the military with the $40,000 PD-100 Black Hornet 2 insect-sized helicopter drone. This little helicopter camera can fly two miles while sending high-resolution audio and video for 25 minutes at a time. Similarly, the British military is designing and deploying insect-like drones with flapping wings and four legs designed to infiltrate and spy on terrorist activities.

Cameras and scanners mounted on vehicles have for long been used for mapping your surroundings. A classic example of this is Google Street View, in which most photography is done by the car. Similarly, in autonomous vehicles or self-driving cars and trucks, several sensors such as camera, radar and LiDAR are fitted so that these vehicles know when to stop or when someone is crossing the road.

However, LIDAR sensors tend to be bulky and expensive, due to the moving parts required. The section at the top of the module spins around constantly, allowing the lasers to build up a 360 degree map. Recognizing the limitations that an expensive mechanical LIDAR module poses for autonomous vehicles and robotics, research institutes and companies have been working towards smaller, more agile and cost effective products.

For instance, researchers at MIT’s Photonic Microsystems Group are working to integrate LIDAR systems onto a microchip that can be mass produced in commercial CMOS foundries.

Quanergy, a California-based startup, is making a LiDAR they say will cut the size of a typical LiDAR by half, and also reduce the cost. Be it sensors to detect outside temperature or front and rear cameras, radar, sonar (or ultrasonic sensors), LiDAR and GPS/WPS systems, these vehicle mounted devices have only grown smaller over the years.

A handheld or mobile device is a computing device small enough to hold and operate in the hand. Apart from mobile phones and tablets, portable 3D scanners are a good example of such devices. To use a handheld 3D scanner, the user hovers and paints around the object to obtain 3D scan data of the entire object. It essentially operates like a video camera, but it captures objects in 3D with continuous scanning. Today, several companies such as Artec 3D, Xbox, Matter and Form and B&Q are manufacturing 3D scanners that are not only small in size, but weigh less then a pound.

Though accuracy and resolution remain to be a concern with handheld devices, especially when compared with stationary or vehicle mounted scanners, they are fast gaining popularity because of cost and ease of use. Also, to address the issue of accuracy, instead of operating the handheld 3D scanner manually, the scan head is mounted to a robotic arm programmed to move automatically. Handheld 3D scanners come handy when scanning in confined spaces where the object, such as an ancient painting in an art gallery or a museum sculpture, cannot be moved to a different location.

Engineers at the California Institute of Technology have developed a cost effective and super compact 3D imaging device that can be integrated into a smartphone.

These are smart electronic devices that can be incorporated into clothing or worn on the body as accessories. GPS-enabled smart watches and fitness trackers are fast becoming an integral part of sports and healthcare sectors, in addition to being immensely popular among the younger generation. While Xiomi, Apple, Fitbit and the likes lead the consumer wearables market, there have been some interesting developments on the professional side too.

For example, Leica Pegasus Backpack, a wearable reality capture sensor platform. The backpack’s highly ergonomic design combines five cameras offering fully calibrated 360 degrees view and two LiDAR profilers with an ultra-light carbon fibre chassis. It enables extensive and efficient indoor and outdoor documentation at high accuracy. Another fine example of such devices is Trimble Connect for HoloLens, which utilizes mixed reality for project coordination by providing precise alignment of holographic data at the worksite. The device allows workers to review their models in the context of their physical environment.

ALSO READ: What are the challenges and priorities for geospatial industry leaders