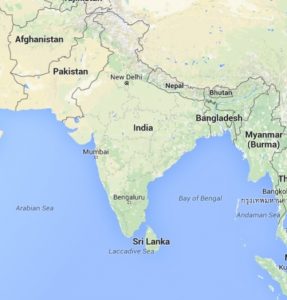 The Geospatial Information Regulation Bill (GIRB-2016) has not only got the Indian geospatial sector in a turmoil but has now got internationalised with our neighbour appealing to no less than the United Nations to stop India from proceeding with the Bill! According to Pakistan all Indian maps are showing the state of Jammu & Kashmir as part of India which is all wrong according to them. I am sure China will now add to this viz a -viz Arunachal Pradesh. The Indian Foreign Office has quite rightly said that the GIRB-2016 is a Bill internal to India and is up for discussion by Indian users. The MHA will most probably point to the Pakistani reaction and strengthen its views on a strong GIRB-2016. In this mid-summer madness some of the key issues are getting lost.

International borders as shown on common maps, both electronic and paper, are more a matter of ‘national’ pride and chest-thumping rather than serious use. The accuracy of online maps as used by taxi aggregators, for example, are at best 10m; it becomes worse as the scale becomes smaller. In the event of a border dispute the maps to be used are not generated by Google of Microsoft but centimetre by centimetre surveys on ground by certified government surveyors on both sides of the border. That is what was done for Sir Creek and New Moore Island.

Modern technology allows a MNC like Google to provide multiple views of the same map. Thus Google can and does show whole of J&K as part of India to users with an Indian IP address and in any other way to users with non-Indian IP address, thus humouring all sides of the debate. So does it really make a difference, except in cyberspace? Is there an equivalent of The International Court of Justice in cyberspace?

In an article in the May 18, 2016 issue of The Times of India (Hyderabad) entitled A Secret History Of Maps, Abheek Barman points out the economic value of maps resulted in treating them as valuable objects to be restricted, protected and therefore to be sought after and stolen like the ‘Cantino Planisphere’ which actually honours the spy, Alberto Cantino, an Italian who stole it from the Portuguese who originally created it by charting the eastern coast of South America, the Africa-Atlantic coast, but most important, locating India with proper latitude numbers. This was in 1500 AD!

Today, the world still needs maps more than ever before, not only for navigation but for as diverse issues as sustainable development, global warming, environmental management and resources management, to name a few. The difference is that the explorers and cartographers do not travel by galleons to distant lands like the Portuguese. They leave it to satellites to orbit in outer space sending back images from a multitude of imaging payloads which work right from the ultraviolet, through the visible, to the infrared and microwave regions of the spectrum. It began with the US launching its Landsat satellites and aggressively pushing an ‘open skies’ policy which basically meant that any country with a satellite could image any other country at will. While this was clandestinely done using spy satellites, Landsat opened up the civilian space. This alarmed many countries and it was not long before the UN began to debate the Principles of Remote Sensing as early as the late 70’s.

In 1986 the UN adopted the Principles Relating to Remote Sensing of the Earth from Outer Space. At the time remote sensing was mainly a government activity but the commercial sector was being encouraged to take up this activity, particularly in the US, Canada and Europe. At present the commercial sector is licensed by the government in the US, Canada and Europe and has to conform to strict regulations that respect the UN Principles of Remote Sensing. However, at times of conflict involving these countries with others, national security needs can override such considerations to exercise ‘shutter control’. In direct contrast a company in Israel provides remote sensing systems on an exclusive and secret basis which completely flies in the face of the UN Principles of Remote Sensing.

India boldly entered the remote sensing field with its IRS-1 in 1988 and soon went global in 1994 by licensing a US company EOSAT to receive and distribute data from all IRS satellites. It is ironic that due to a mishap with their first high resolution satellite IKONOS-1 EOSAT was initially dependent on the Indian IRS-1C and D for high resolution data. A fact which the MHA needs to consider, because any move such as the GIRB-2016 which limits the use of foreign satellites for mapping in India by entities like Google could adversely affect the global reach of the Indian Remote Sensing Programme which now has licensees worldwide.

What about the UN? The UN has always supported the use of spatial technologies and recently formed the Global Geospatial Information Management (GGIM) to examine the way geospatial technologies can contribute in various effort like the initiative on Sustainable Development. It is strange that India is rather conspicuous by its low profile in the activities of the UN-GGIM. Considering the fact that India has been an early mover in mapping using Remote Sensing and in its commercialisation through Antrix Corporation, is the restrictive mindset as shown by the GIRB-2016 a likely cause?

Whatever may be the case, politics and maps are intertwined and it would do the country good if MHA ignores the Pakistani irritation and any possible Chinese support to this irritant and tone down the GIRB-2016 if not junk it altogether. MHA needs to consider policies like the NGP-2016 recently published by the Department of Science and Technology and consult other data generators and users to come out jointly with a better Bill.