Melting glaciers due to rising temperatures is not a phenomenon unknown. The melting glaciers are known to affect the sea levels, making them rise, but how will this affect the life in cities? Maybe not directly, but as the rising sea levels affect the coastlines, cities will face the brunt in one way or the other.

We are all aware that the Glaciers in Greenland are melting at an increasingly rapid pace, but do you know this will affect cities like New York and London as well? Though Greenland and Antarctica are far from these cities, the melting glaciers in both regions are expected to raise sea levels enough to change many of the world’s coastlines.

For instance, New York is likely to get affected by the meltdown of three major glaciers in Greenland’s northeast and northwest: the Petermann, Zachariae, and Jakobshavn. London is facing danger from the northwestern part of the Greenland ice sheet, and strangely, Sydney needs to fear those parts of the Antarctic ice that are actually farther from Australia more than the ones that are closer.

The image below indicates which areas of the New York City have the maximum threat from the melting glaciers of Greenland. The red portions are the ones that face the maximum danger.

Rising to the occasion

Only being aware of an upcoming disaster is definitely not enough; the brains of the world must come together to find a solution that can minimize the risks, and this is what scientists of NASA have contributed towards. They have created an interactive tool that allows users to pick from 293 coastal cities and see how those areas could be affected if particular ice masses melt into the ocean.

The image below as obtained from the interactive tool tells us how London is going to get affected due to the rising sea levels. You can also know about your city’s situation by clicking here.

Preparedness is the key

Rising sea levels could bring disruptive levels of flooding and the wrath caused by floods is unimaginable. It’s futile to fight nature because it’s likely to overpower, but we can surely prepare ourselves better.

This interactive tool by NASA is surely an excellent step towards a safer world. The researchers hope that coastal planners will use their newly developed tool to inform decisions about how cities should adapt to climate change.

“As cities and countries attempt to build plans to mitigate flooding, they have to be thinking about 100 years in the future and they want to assess risk in the same way that insurance companies do,” NASA senior scientist Erik Ivins told BBC.

Small steps are being taken, but we need much preparedness at a much bigger level to combat the upcoming disaster risks that are staring at our face. To start with, why not become more sensitive towards the plaguing climatic issues?

Also Watch: Why Greenland glaciers are melting so fast 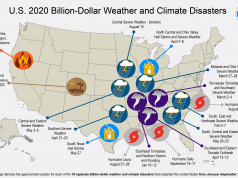