US have the lone distinction in the developed world in the case of private gun ownership. The country has more guns than the number of citizens and with the unfettered laissez-faire trade in guns, one just has to walk into the nearest supermarket and purchase a pistol, handgun, shotgun or a semi-automatic rifle of his choice( fully automatic rifles or machine guns are not legally permitted since 1986). In per capita gun ownership, US are second to none. Mass shootouts in schools, shopping complexes and theatres are also a peculiar US problem.

In the wake of the ghastly mass shootout in Las Vegas, the most gruesome shootout in the American history, more than 70 people lost their lives and close to 500 were injured. Stephen Paddock, the perpetrator of the massacre, legally bought 33 semi-automatic weapons.

Gun control is a hotly contested debate in the US and one that polarizes the country. The right to bear firearms is constitutionally enshrined under the Second Amendment of the US constitution and that makes regulating guns all the more difficult, as state intervention in gun ownership is deemed as infringement of citizens liberty by large sections.

Gun Dealers in the USA

There are approximately 65,000 gun dealers across USA.

A mapping project by the data visualization company 1point21 Interactive puts this figure into perspective by comparing it with something a lot of Americans love to savour- Starbucks coffee.

Upon entering the zip code, a tool called “Firearms + Frappuccinos” maps the locations of gun dealers (in pink), mass shootings (in yellow), and Starbucks (in green)

The gun shop location data was provided by the ATF, while the Starbucks locations were given by open data company Socrata .

Here are the maps of six major US cities, including Las Vegas

The mapping project attempts to highlight how entrenched the gun menace in USA is, and also how the lax attitude towards guns have made them a part and parcel of the American life, especially in the southern states and the midwest.

Las Vegas, the city famed for its glittering casinos, has equal number of gun stores and Starbucks outlets. The state of Nevada has very liberal gun laws and it strongly resisted regulations.

The state does not asks for permits to buy rifles, shotguns, or handguns, and firearms can be brandished openly. Residents are not required to register their weapons with the state or obtain a gun license either.

Moreover, Nevada has a “stand-your-ground” law, which enables people to use deadly force against someone who attacks them, even if that person is unarmed.

Under the supervision of a parent or guardian, children 14 years and older can also handle rifles or shotguns.

California, unlike a lot of other states, mandates that all gun sales require a thorough background check. There are still a large number of gun dealers in Los Angeles, but not as many as there are Starbucks.

Most heavy-duty assault weapons and heavy capacity magazines are also banned in California.

Lousiana has some of the most liberal gun laws

Baltimore, Maryland has about 40 more gun dealers than Starbucks locations.

Chicago has 1 gun shop for every 3 Starbucks. The state of Illinois has relatively strict gun laws 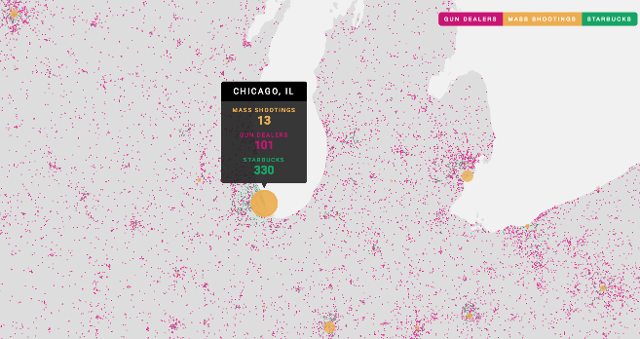 New York City– nicknamed the Big Apple– has relatively strict gun laws, there are about two Starbucks for every gun dealer.

Starbucks has around 10,843 locations across the US. This means that for every Starbucks, there are nearly six gun stores. Exceptionally and uniquely American!

USA is home to 4.4% of the worlds population and has more than 50% of the civilian-held guns in the world.