Landslide is a general term used to describe the down-slope movement of soil, rock and organic materials under the influence of gravity (Varnes , 1984).

There is a crucial role of GIS and Remote Sensing tools for improved landslide inventory mapping and landslide assessment and susceptibility.  In this concept note, the application of GIS is emphasized for the prediction and mapping of landslide susceptible areas in the Indian state of Himachal Pradesh.

There are three major causes that create the occurrence of landslides – Geology, Morphology  and Human activity.

Geology refers to characteristics of the material itself. The earth or rock might be weak or fractured, or different layers may have different strengths and stiffness.

Morphology refers to the structure of the land. For example, slopes that lose their vegetation to fire or drought are more vulnerable to landslides. Vegetation holds the soil in a place and without the root system of trees, bushes, and other plants, the land is more likely to slide away or eroded by the rainfall. Other causes are: Climatic conditions, Earthquakes, Weathering, Erosion, Volcanoes, Forest fires and Gravity.

Human activities like agriculture and construction can increase the risk of a landslide. Mining activities utilizing blasting techniques contribute extremely to landslides. Vibration produced from the blasts weakens soils in nearby areas and make the land susceptible to landslides.

There are many ways to describe a landslide. The nature of a landslide’s movement and the type of material involved are two of the most common.

Landslide Movement: There are several ways of describing how a landslide moves. These include falls, topples, translational slides, lateral spreads, and flows.

In falls and topples, heavy blocks of material fall after separating from a very steep slope or cliff. For example, Boulder tumbling down a slope would be a fall or topple.

A lateral spread or flow is the movement of material sideways, or laterally. This happens when a powerful force, such as an earthquake, makes the ground move quickly, like a liquid. 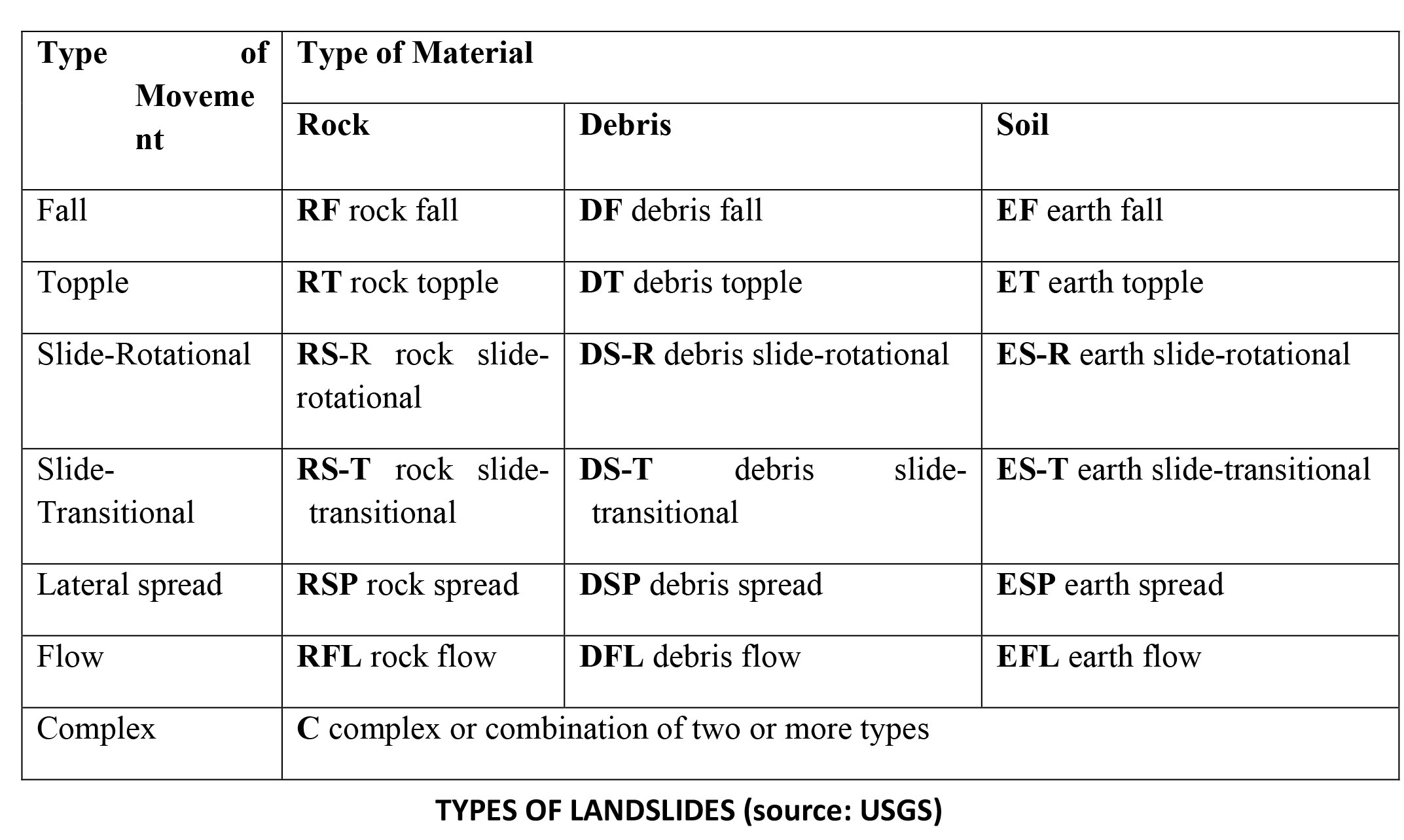 Landslides are one of the major disasters that occur in hilly region. They are unpredictable by nature and thus their analysis is complex to study. RS and GIS tools can be of utmost importance in analyzing the effect of factors on which the occurrence of a landslide event depends.

The definition of “Landslide Hazard Map” includes “zonation showing annual probability of landslide occurring throughout an area” (USGS).  A landslide susceptibility map is a basic concept of landslide susceptibility (Radbruch 1970; Dobrovolny 1971; Brabb and Pampeyan 1972) includes the spatial distribution of factors related to the instability processes in order to determine zones of landslide-prone areas without any temporal implication. This approach is useful for areas where it is difficult to secure enough information concerning the historical record of landslide events ranks the slope stability of an area in categories that range from stable to unstable. Susceptibility maps show where landslides may occur.

First the objective of the study is defined. Danger exists that the data that will be collected will not be in accordance with the scale of analysis, or the method of analysis. This might lead to a waste of time and money if too detailed data is collected, or an oversimplification if too general data is collected.

The following things should be considered:

Landslide hazard studies can be made for many different purposes. Some of these might be:

Each of the above objectives will lead to specific requirements with respect to the scale of work, the method of analysis and the type and detail of input data to be collected

Smaller than 1:1.000.000, covering an entire country, mainly intended to generate awareness among decision makers and the general public. Maps on this scale are often intended to be included in national atlases.

Between 1:100.000 and 1:1.000.000, covering a large catchment area, or a political entity of the country. The maps at this scale are mostly intended for observation phases for planning projects for the construction of infrastructural works, or agricultural development projects.

Between 1:25.000 and 1:100.000, covering a municipality or smaller catchment area. Intended for the detailed planning phases of projects for the construction of infrastructural works, environmental impact assessment and municipal planning

Between 1:2.000 and 1:25.000, covering a town or (part of) a city .They are used for disaster prevention and generation of risk maps, as well as for the design phase of engineering works.

Between 1:200 to 1:2000, covering the area where engineering works will be carried out, or covering a single landslide. They are used for the detailed design of engineering works, such as roads, bridges, tunnels, dams, and for the construction of slope stabilization works. 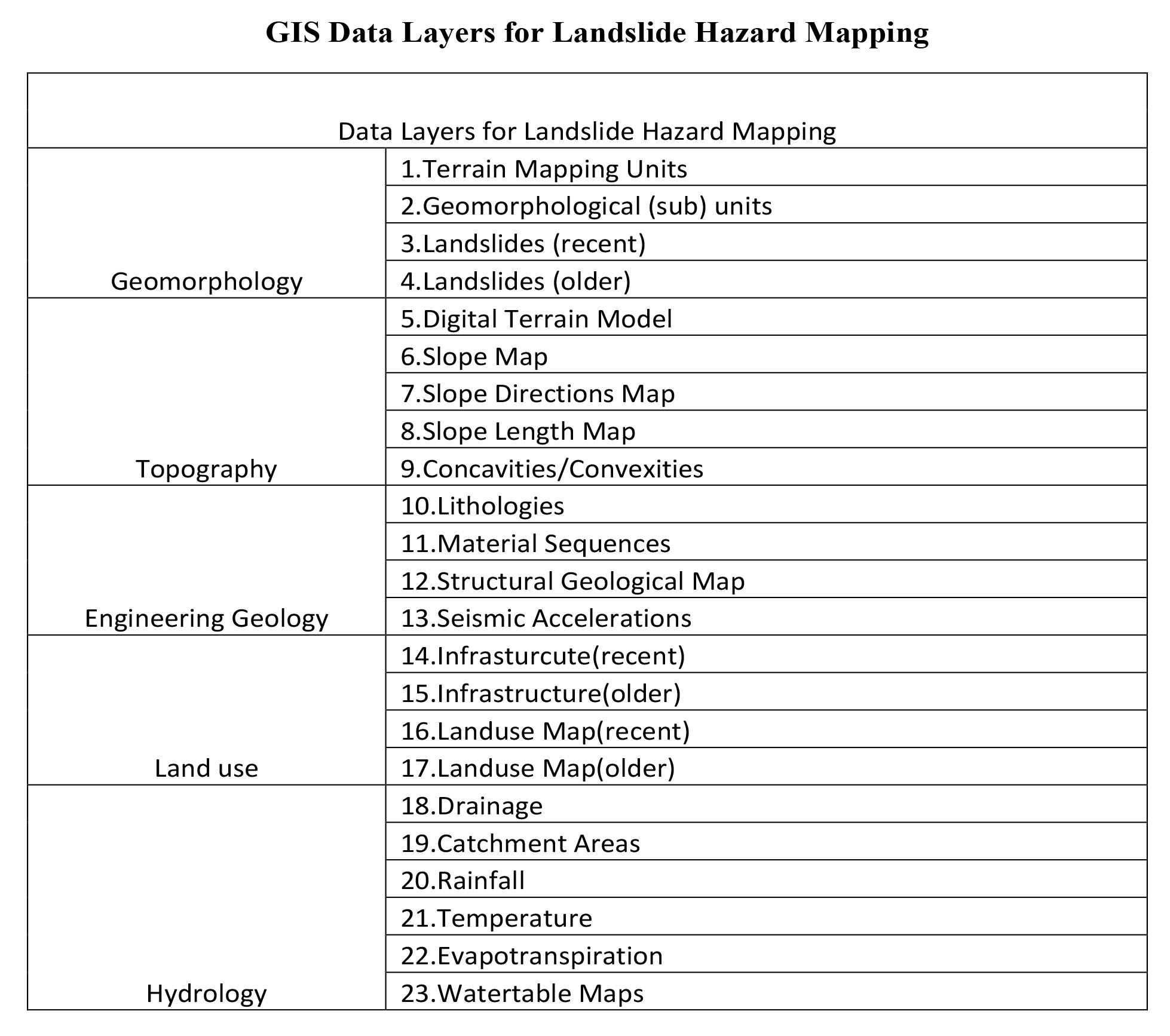 The mapping of areas with an equal probability of occurrence of landslides within a specified period of time (Varnes, 1984)

Conditions which led in the past to slope failures, will also result in potential unstable conditions in the present.

Experience driven applied geo-morphological approach, where the earth scientist evaluates the direct relationship between the landslides and the geo-morphological and geological setting during the survey at the site of the failure.

The mapping of a large number of parameters and the (statistical or deterministic) analysis of all these possible contributing factors in relation to the occurrence of slope instability phenomena, determining in this way the relation between the terrain conditions and the occurrence of landslides. Based on the results of this analysis statements are made regarding the conditions under which slope failures occur.