Geospatial technology has emerged as one of the most prominent technologies that are driving developmental activities around the world. It has become the by default technology whose reach and scope extends across motley fields.

As per the 2019 ICT4D survey, conducted jointly by Devex and CRS (Catholic Relief Services), geospatial and mapping is the 4th major sector that will have a great impact in the developmental sector in the next 5 years. 72% of the survey respondents believe that geospatial and mapping will have a great role to play in various aspects of development.

Due to increasing digitalization and the changing nature of the technological landscape, interconnected technologies will drive future innovation. Owing to its ubiquity, geospatial will undergird development in multiple sectors and lay down the groundwork for the mainstreaming and mass adoption of emerging technologies like AI.

Geo footprint all the way

The top three trends as per the survey are : Connectivity, Data Analysis and Ultra-low cost smartphones. 87% of respondents chose connectivity as the most important factor, followed by 82% and 75% respectively who listed data analysis and low-cost smartphone as the paramount factor.

What is interesting is the fact that all three trends are also not entirely independent of geospatial and location.

Ease-of-connectivity is prerequisite for technological access and is an enabler that ensures access to all other technologies and services, including high-quality mapping.

Data analytics, which is the 2nd major trend, is a fast emerging field in an era where data fuels the engine of the world economy. Data analytics is inextricable from geospatial given that for gaining accurate insights and optimum results, data that has a spatial component is increasingly being collated and processed by companies. Geospatial and Location could be termed as the pillars of analytics. With plethora of data, we need faster data processing capabilities and this is where the confluence of geospatial and location with technologies like AI and Machine Learning comes into the picture.

Other major trends as per the survey are Big Data, IoT, Platform Economy, Drones, AI, BLockchain, and Virtual Reality.

Even though geospatial isn’t directly a part of these technology sectors. But it is emerging as a game changer in all of the aforementioned sectors due to reliance on technological integration, convergence and the trend of incorporating a location and spatial component for delivering the desired output.

The versatility of geospatial can be gauged from the fact that it operates as a primary technology as well as an essential support system to other technologies. For instance, the Platform Mode of Service or the Platform Economy, which is a major trend in the Location industry that is driving growth as well as keeping pace with increasing consumer demands. Some of the early birds in the Platform mode are major players in the location segment.

In the field of Artificial Intelligence, the merger of Geospatial with AI also referred to as Geo.AI, is being widely talked about. Geospatial AI can also be called a new form of machine learning that is based on a geographic component.

In the realm of business, Geospatial AI would substantially improvise planning, resource allocation, and decision-making – predicting the surge in demand and supply, identifying the prospects of high and low margin, multiplying supply chain efficiency, and optimizing service delivery

Emerging markets and other takeaways 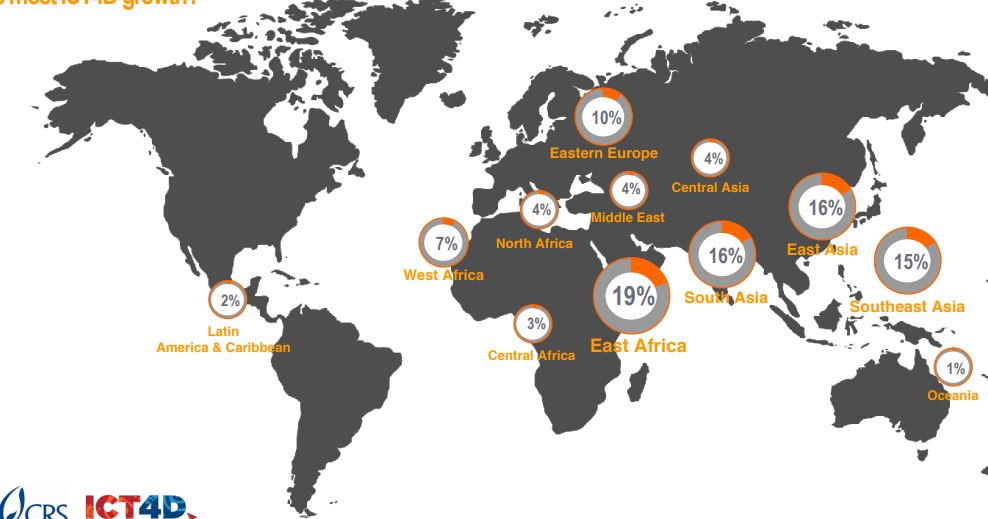 The survey lists Asia as the region of maximum growth in the next five years, followed by Africa. 47% of respondents agreed with Asia as having the highest growth in ICT4D, as against 33% who chose Africa. Another interesting finding of the survey is that the majority of users of technology are the staff of developmental organizations or other aid agencies that operate on the ground mainly in developing countries.

This vindicates the Geospatial World CEO’s survey where overwhelming CEOs preferred Asia as the emerging destination for development. India and China, when taken together along with the rest of the region, make Asia Pacific look like a hotbed of change with an interesting combination of new entrants and technology companies constantly making new markets with new business models leveraging disruptive technologies.

This also means that there is no chasm between the geospatial Industry leaders and common respondents as to where the industry is headed next and what would spur growth and innovation.

Nearly 80% of the respondents in the 2019 ICT4D survey were of the opinion that ease of data collection and faster analysis nurtures a culture of efficient data use within organizations.

However there are still concerns in the developmental community, and the topmost concern is that the ROI( return of investment) in ICT4D is not substantial. This is a major challenge that needs to be addressed.

Merely developing technological capability isn’t enough; we have to ensure that the technology is disseminated and reaches to the grassroots.

“It’s not enough that we have the technological capability at our fingertips. We have to get technology into the hands of local partners and program participants,” says Jennifer Poidatz, CRS Vice President of Humanitarian Response, ahead of the 11th ICT4D Conference held in Kampala, Uganda.

Also Read: What are the challenges and priorities for geospatial industry leaders