During the Year In Infrastructure 2019, taking place in Singapore, from October 21-24, Bentley Systems showcased some of their most interesting users.

Growth in Rail and Transit sector

While there’s massive interest in automated cars and self-driving vehicles, the rail and transit sector continues to be the fastest-growing transportation sector. It keeps producing new opportunities and challenges for existing and proposed rail networks. Railways are constantly challenged to do more with less: more trains and hours of services and less funding, maintenance time, and disruption during construction. To deliver a safe, reliable, and efficient service against this backdrop, it is necessary to change the way we think – tackling inefficiency at its root to ensure that rail professionals will be doing the best they can with the available resources. The concept of ‘digital twins’ ran through this year’s edition of Bentley’s Year In Infrastructure. A good example could be seen in a drone surveying project for BIM and GIS Data Capture. The Sungai-Buloh-Serdang-Putrajaya (SSP) Line runs through the center of Kuala Lumpur and its southern suburbs, serving approximately 2 million people. As Malaysia’s first metro megaproject, it includes constructing 13.5-kilometer twin bored tunnels and 17 individual construction sites, the largest exceeding 17,000 square meters in the dense capital city. MMC-Gamuda joint venture is the turnkey contractor tasked with optimizing project design and constructability.

During the Award ceremony, Italian company Italferr S.p.A. managed to win two awards. They won in the Rail and Transit category, plus they got a special recognition award for their southern Italian Napoli-Bari Route. As part of the Trans European Network, the EUR 6.2 billion Napoli-Bari route will integrate rail infrastructure in southeast Italy, shortening travel time by several hours. This project covers a 60-kilometer stretch from Apice to Bovino, where lines run primarily through tunnels. Five mixed steel-concrete viaducts manage the transitions between tunnels and open-air construction. Italferr S.p.A. chose a BIM methodology to achieve a more efficient design and build process.

For this project, Italferr S.p.A. pulled all the plugs in terms of Bentley software usage. Across the project, they worked with ContextCapture, Descartes, gINT, iModel.js, LumenRT, MicroStation, Navigator, OpenBuildings Designer, OpenRail Designer, OpenRoads, ProjectWise and SYNCHRO. To facilitate data and information exchange among various parties, Italferr set up a connected data environment (CDE) based on ProjectWise. The project team used OpenBuildings Designer parametric modeling components to optimize and automate manual processes. Once a federated model of the railway infrastructure is assembled, parametric content can be managed dynamically. Modeling the technical components of the project allows Italferr to explore alternative scenarios, improve design quality and accuracy, and reduce costs.

A ‘BIM in Rail’ in India

Larsen and Toubro Limited were called to the main stage during the Year of Infrastructure in Singapore. Their project, 128 kilometers of the western dedicated freight corridor of India boasted a 30 per cent reduction in time and cost savings through developing a ‘BIM in rail’ using drone data and much more. The Dedicated Freight Corridor of India Limited has embarked on its second phase of development, consisting of 550 kilometers of double-line electrified track for operating trains at up to 100 kilometers per hour. Larsen & Toubro Limited (L&T) won the INR 37 billion contract to design and construct a 128-kilometer section (CTP-14) from Rewari to Dadri in the states of Haryana, Rajasthan, and Uttar Pradesh. This challenging section involves difficult, inaccessible terrain and complicated earthworks. 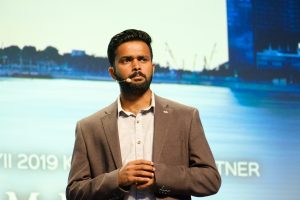 L&T used Bentley technology to create a single repository for the free flow of accurate information and a collaborative way of working that has decreased resource hours by about 15 per cent. In the ‘Project Playbook’ one finds ContextCapture, LumenRT, MicroStation, Navigator, OpenBridge Designer, OpenBuildings Designer, OpenRail Designer and OpenRoads Designer. The project team is leveraging Bentley software to conceptualize, design, and execute the project. They used reality modelling for major components, such as bridges, viaducts, station yards, and retaining walls. Interoperability has allowed the team to coordinate work and significantly reduce resources for design review.

Compared to some of the mind-boggling current rail projects crossing Asia and India, Sweco Nederland’s Bergen Light Rail Norway in Norway nine kilometers’ length may pale in comparison. But… There is extensive tunneling, eight stops through the mountainous city and complex engineering. And… We are still talking about a $ 67 million project. The system’s first underground depot is in one of two tunnels totalling five kilometers. Working in collaboration with the client, Bybanen Utbygging, Sweco Nederland created a connected data environment (CDE) for eighteen disciplines located in five countries. 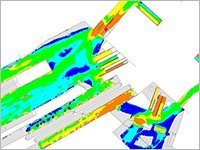 Earlier editions of the Year In Infrastructure took place in London. Local rail projects were abundant, going back to new infrastructure needed for the Olympic Games in 2012. In 2019, Transport for London has maximized capacity of Stratford Station using LEGION SpaceWorks. Stratford Station’s passenger demand increased by approximately 100,000 passengers daily between 2012 and 2017. Another 30 per cent daily increase is expected within the next 10-to-15 years. This will cause significantly more crowding at the station. The project team used LEGION to model the station, simulate traffic flow, and assess and quantify congestion impacts. Using the software enabled the team to safeguard land for which had been outlined for redevelopment, and to put forward the sequence in which identified station enhancements should take place. LEGION helped generate color graded heat maps that demonstrated modeling outcomes to project stakeholders, providing otherwise unavailable evidence to gain financial contributions.

During the Year In Infrastructure in Singapore, Kivanc Karakas, Product Manager of Bentley Systems acted as an OpenRail workshop teacher. During the OpenRail sessions, Karakas spent his whole morning demonstrating dedicated software tools for rail. He showed his audience how to quickly create conceptual designs for planning and improving decision-making processes using OpenRail ConceptStation. This application enables users to create 3D models to conceptualize rail, electrification, tunnel, and bridge designs. One can generate multiple design scenarios with associated project costs. Also, it’s possible to share them with project teams and stakeholders to choose the best option. During his demo, Karakas showed how to combine imagery, terrain, GIS data, and reality modeling within the conceptual design. By doing this, one identifies high-cost and high-risk items early in the preliminary and planning stages of a project.

Karakas moved on to a different subject. How to utilize models from OpenBridge, OpenRoads, OpenSite, and other ‘Open’ applications to ensure better coordination and collaboration across workflows and disciplines. This way, the user can integrate information, including asset attribution needed during design and construction. OpenRail Designer automates the production of an array of design deliverables. The dynamic, interactive modeling environment provides for reliable changes to construction documents such as cross sections and plan/ profile sheets. Karakas showed how OpenRail Designer is model based approach, akin to BIM principles. Moreover, it provides flexibility and accuracy in quantity calculations. During his demo, Karakas showed very specific Bentley CAD/ BIM tools for rail, like civil cells, design constraints and relationships, design time visualization, and dynamic model updates.

In a dedicated forum, Bentley opened the doors to showcase examples that go ‘beyond BIM’. There, one could see the benefits of the digital twin for owner-operators and their supply chains. The most disarming and heart-warming presentation by far came from a group of sixth form students aged sixteen to eighteen. They conceptualized a design for a hyperloop system and station in Singapore. Earlier this year, they were part of the first ever ‘Future Infrastructure Challenge: DEC Hyperloop’ student event in London. This was hosted by Bentley Institute and Class of Your Own. Another Hyperloop’s ‘vision to reality’, was presented by Harj Dhaliwal of Virgin Hyperloop One. He spoke about the company’s aspirations to change the face of transportation for both passenger and cargo use. Lastly, he provided an update on the technology and various projects around the world.

Read more: Class Of Your Own announces school curriculum partnership with Bentley Systems

Bentley Systems dedicated a huge part of The Year In Infrastructure to ‘Digital Cities’ and ‘Digital Twins’. Albeit, one could easily detect a likewise focus within the rail sector. Take reality modelling, the deployment of drones, connected data environments. All these aspects pointed towards a concept of ‘Digital Rail’ being set in place.