Tropical Cyclone (TC) Fani hit India on 3 May with sustained winds of 240km/h – it was the most intense cyclone to make landfall in the country in 20 years. India is not alone in experiencing such record-breaking disasters in recent years – Mozambique and the devastating cyclones that crippled the country or deadly hurricanes that ravaged through the Caribbean and hit the USA are just a few examples. It is not only extreme weather events, but also the forest fire season has spread throughout the year and the fires now occur in uncommon areas. At the same time, prolonged droughts and widespread flooding are also becoming more common. In a world of changing climate and intensifying natural disasters, Earth observation applications for emergency management are becoming increasingly important.

As Fani was closing in on India with full intensity, the Indian authorities undertook one of the largest evacuation efforts in history, with 1.2 million people being evacuated within 24 hours. Overall, approximately 2.6 million people were evacuated across India and Bangladesh which allowed to prevent large numbers of fatalities. The Indian authorities also requested support from the Copernicus Emergency Management Service (Copernicus EMS), a tool provided free-of-charge by the European Union to the global community. After Fani’s passage along the coast of Odisha, the maps provided by Copernicus EMS helped the local authorities assess the extent of the flooding and the degree of damage over the affected coastline. The first delineation map over Odisha showed a staggering 13,483.3 ha (134.8 km2) of the area flooded at the time of satellite imagery acquisition (read more in the Copernicus EMS Information Bulletin). These maps help the emergency response authorities by giving a quick and broad situational overview, enabling them to plan response activities more effectively. 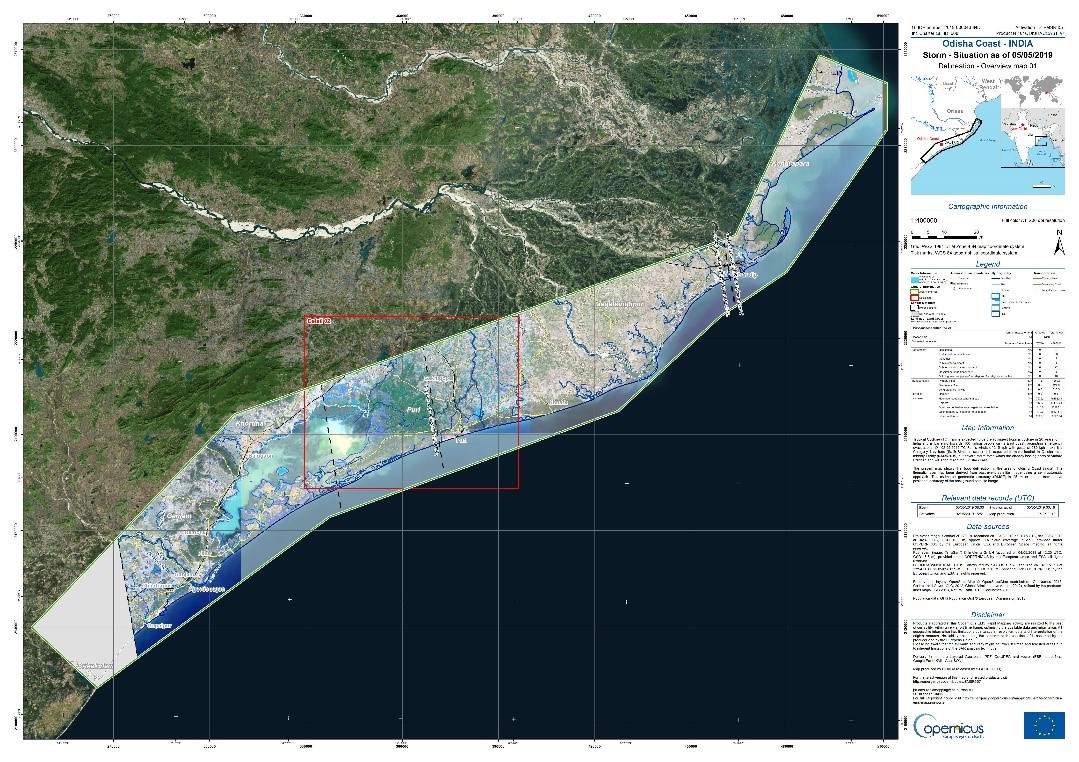 What is Copernicus EMS?

The Copernicus Emergency Service – one of many services provided by Copernicus – provides a suite of tools to support disaster risk reduction and emergency management for users around the world. These include:

When disaster strikes, the Rapid Mapping service is on duty 24/7 to help assess the damage, for instance flood extent, burn scar size or the number of buildings destroyed. It can also help humanitarian relief efforts, as it has in the cases of the Rohingya refugee crisis and for Internally Displaced People in Nigeria and Afghanistan. 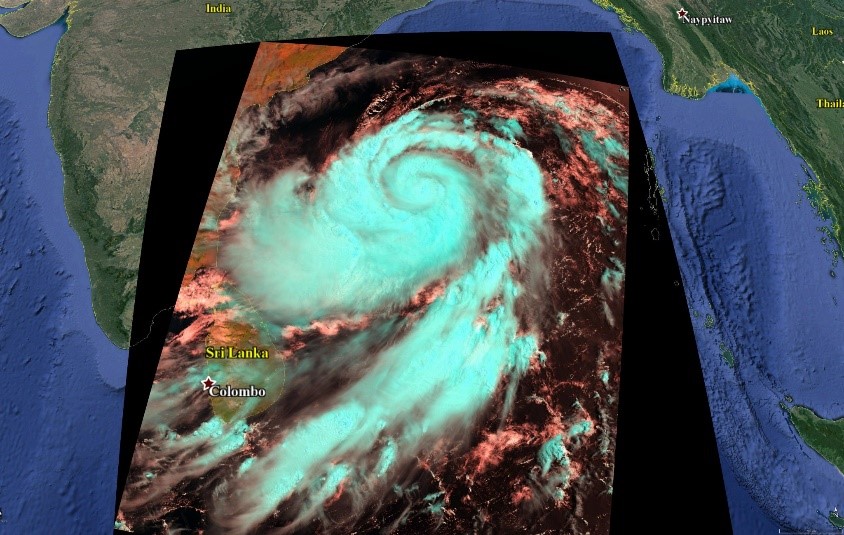 How vulnerable is the road network in your city in the case of an earthquake? Which parts of the city are more vulnerable to floods? These and many other questions related to risk, vulnerability and exposure can be answered with the geospatial products from the Copernicus EMS Risk & Recovery Mapping tool.

Early Warning & Monitoring Systems for Forest Fires, Floods and Droughts are available in European and global versions, with tools freely available for use anywhere in the world.

Copernicus EMS for India and the global community

Rapid Mapping (RM). Tropical Cyclone Fani was not the first time that Copernicus EMS Rapid Mapping was activated for India. It was used during the floods in Assam in 2013 and the floods in Andhra Pradesh in 2014 to name a few examples. The Rapid Mapping tool is available free-of-charge and operates 24-hours a day, seven days a week and 365 days a year. Authorities in India (and other countries outside of Europe) can activate the Copernicus EMS directly through the ERCC, the European Response Coordination Centre, or through the EU delegation in the country or region. A detailed how-to is available on the EMS website.

Tropical Cyclone Fani on 30 April as seen by Copernicus Sentinel-3. At the time the Cyclone was between Sri Lanka and the Andamana and Nicobar islands, moving towards the Indian coast.

Risk & Recovery Mapping (RMM). This component provides maps, digital geoinformation and reports that can be used for preparedness, prevention, and Disaster Risk Reduction activities, but also to monitor reconstruction after a disaster. Note: currently the RRM service product portfolio is being upgraded and the service will start accepting requests again in Q4 2019.

Early Warning & Monitoring Systems: floods. The Global Flood Awareness System (GloFAS) is the global flood service of the Copernicus EMS, an operational system which monitors and forecasts floods across the world. The aim of GloFAS is to complement relevant national and regional authorities and services and to support international organisations in decision making and preparatory measures before major flood events. The GloFAS system is composed of an integrated hydro-meteorological forecasting chain and of a monitoring system that analyses and updates results daily (GloFAS 30-day) and monthly (GloFAS Seasonal). GloFAS forecasts of possible flood episodes and unusually high/low river flow for all major rivers of the world are shown through a dedicated web platform, the GloFAS map viewer that is freely accessible to worldwide users after creating an account. 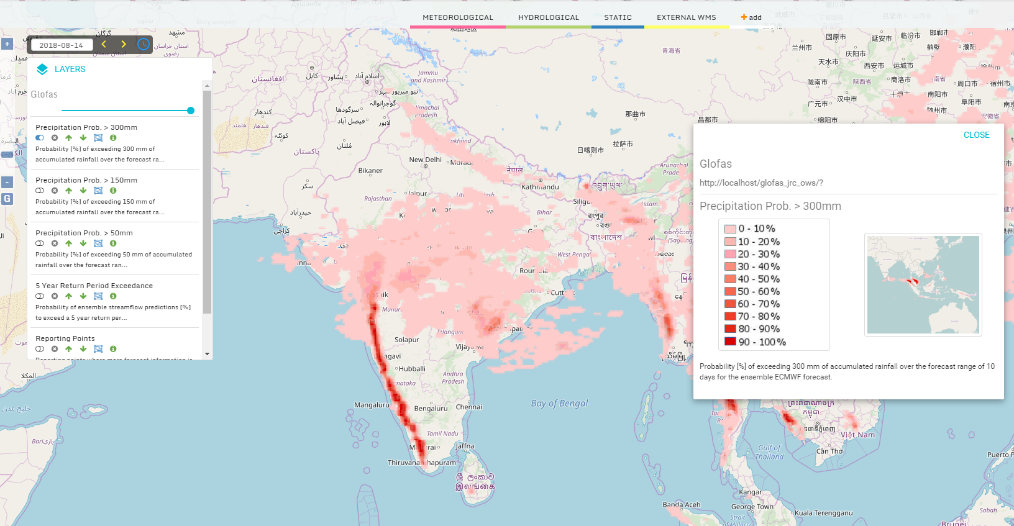 Early Warning & Monitoring Systems: forest fires. The Global Wildfire Information System (GWIS) can support forestry and firefighting services globally. It is a joint initiative of NASA, the GEO Secretariat and the Copernicus, currently available in pre-operational mode. It aims at bringing together existing information sources at the regional and national level to provide a comprehensive view and evaluation of fire danger and active fires as well as statistics at national and global level (the European Forest Fire Information System (EFFIS) is fully operational).

Global Drought Observatory (GDO). It is developed by the Copernicus EMS European Drought Observatory (EDO) team. It monitors the evolution of droughts, provides alerts on the basis of forecasts, and assesses the risk of significant impacts. Risk assessment is based on combining information on the evolution and severity of droughts, the exposed population and assets, as well as with indicators on the vulnerability of affected societies. The GDO Map Viewer provides an overview of countries that are most severely affected by droughts. Drought Reports provide an analytical analysis of particularly severe drought events (e.g. Drought News in India: Situation in December 2018). GDO also provides a global database of meteorological drought events from 1951 to 2016. The whole range of GDO tools is freely accessible to users around the world. 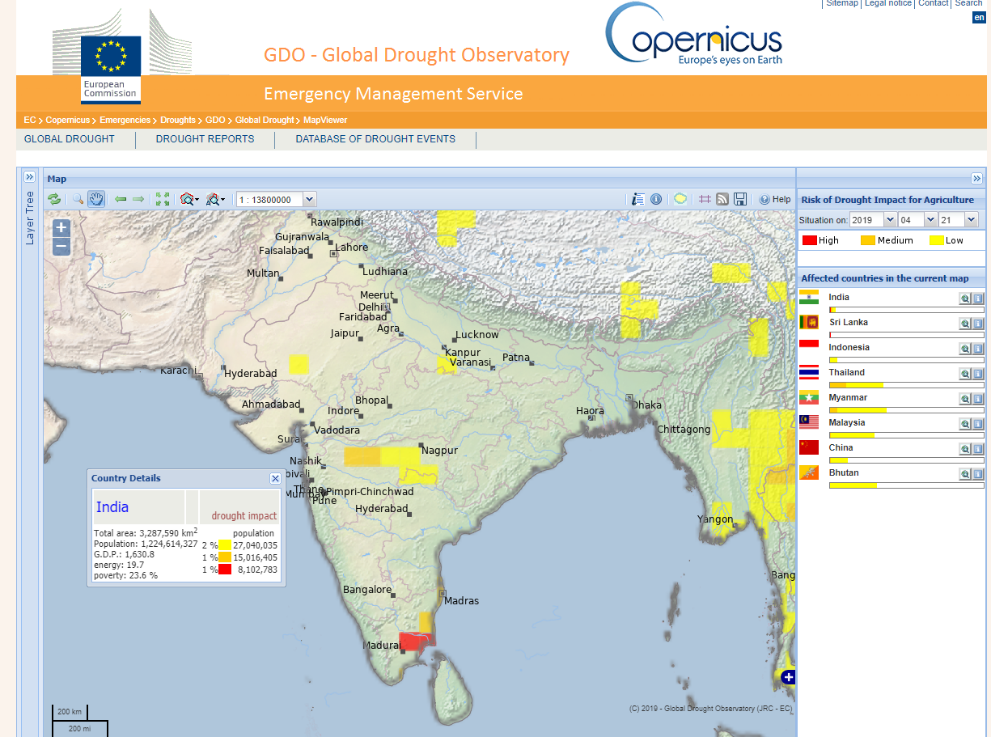 In our changing world, we need to change too. The global, free and open Copernicus EMS tools provided by the European Union to the global community address every stage of the disaster risk management cycle. With these tools, a more effective, efficient and integrated response becomes possible.