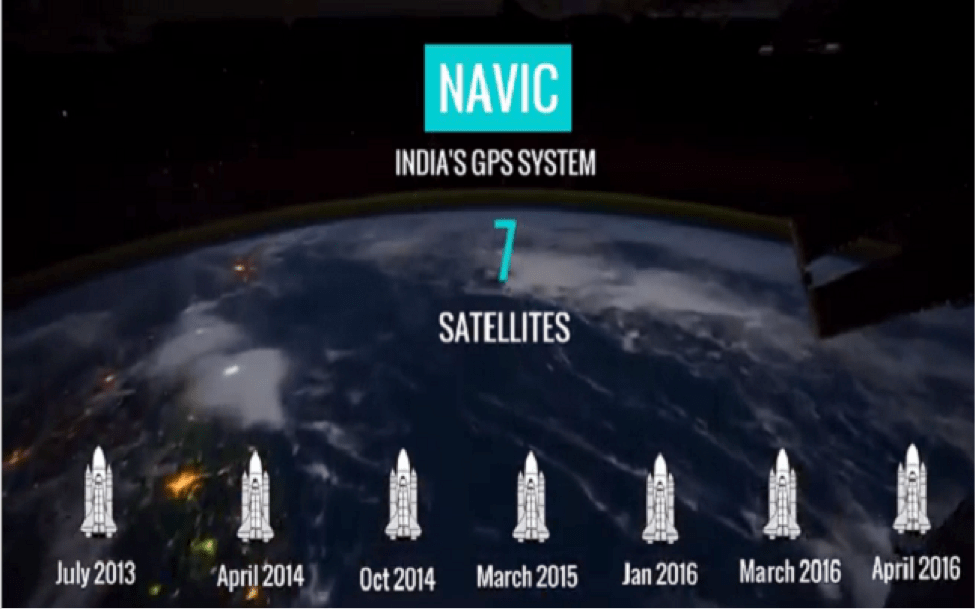 In a report on Department of space (DOS) which was tabled in Parliament on Tuesday, CAG noted that NavIC (Navigation with Indian Constellation) had already incurred an expenditure of over INR 12.8 billion but the system is not operational as of June 2017 due to delays in realization of various segments.

The Government of India sanctioned INR 14.20 billion in 2006 for NavIC, initially known as Indian Regional Navigation Satellite System (IRNSS), in 2006. By March 2017, ISRO has incurred a total expenditure of INR 24.46 billion, the report noted. This includes INR 12.84 billion under the program, and an additional expenditure of INR 11.62 billion on launch vehicles and maintenance of the satellites and the ground segment.

NavIC consists of three segments – space, ground and user. The space segment consists of seven satellites in IRNSS series, while the ground segment is responsible for maintenance and operation of the NavIC constellation and the user segment comprises frequency user receivers capable of receiving NavIC signals.

“Though the space segment has been completed, NavIC remained non-operational due to non-completion of ground segment and user segment. There were delays in realization of key components under the program which led to idling of the satellites”, said the report. It also underlined the fact that because the life of a navigational satellite is 10-12 years, it would seriously hinder the country’s vision of an indigenous satnav system even when it becomes operational since the satellites were already launched under the program a couple of years back and were lying idle. Further, it noted the ground stations set up to service NavIC also lie dormant, adding to maintenance costs.

Delay of over five years

What is interesting is the CAG report says the development and deployment of NavIC constellation, ground infrastructure, navigation, safety and certification, verification software was expected to be completed within five to six years from the date of approval of the project i.e. by December 2011.

However, it was only in July 2013 ISRO was able to launch the first satellite – IRNSS-1A. The six following satellites IRNSS-1B, IRNSS- 1C, IRNSS-1D, IRNSS-1E, IRNSS-1F and IRNSS-1G launched between April 2014 and April 2016. However, in early 2017, ISRO said three atomic clocks on the satellites had failed. A replacement satellite, IRNSS-1H was attempted to be launched in August 2017, but the mission failed since the heat shield of the rocket failed to separate for releasing the satellite. The next replacement launch is scheduled for Apirl 2018.

The CAG audit covered the period 2012-17 and reviewed 45 contracts  awarded for realization of various components under the three segments of the NavIC program. It observed delays in the execution of these contracts at each stage ranging from two years to nearly nine years. The audit also observed overall delay ranging from three months to more than nine years from the date of approval of the NavIC programme in the completion of 11 components of the contracts.

The delays were attributed to sites not being ready, revisions in the technical specifications, non-compliance with contract specifications by the contractor, administrative reasons, delays in shipment and delays in completion of civil works. While some of causes for the delay were beyond the control of ISRO/DOS, a substantial part of the delays were attributable to inadequate follow-up, lack of coordination with government and other agencies as well as sheer administrative laxity. As a result, the components could not be realized within the stipulated duration of the program (December 2011) and 36 out of the 45 contracts remained unfulfilled as of December 2011.

The audit further observed that seven contracts remained unfulfilled even as of May 2017 after more than five years from the schedule date of completion of the program. The delay in completion of activities under the contracts from 31 December 2011 as of 31 May 2017 is given in the table  below. 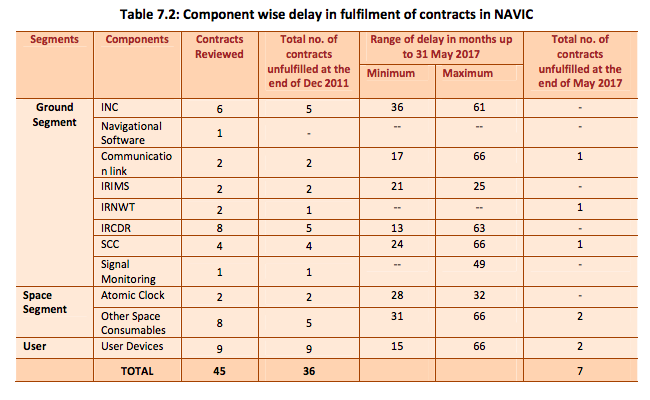 Other than “unnecessary expenditure” on modems, satellite receivers and system simulators, some of which were found to be not in line with the mission’s needs, ISRO also drew flak for refusal to develop the user segment in September 2016 since it felt that it “was the responsibility of the user”. CAG says “reply is not tenable as ISRO was required to develop critical technologies for the user receiver devices as approved by the Cabinet”. ISRO’s original sanction of INR 14.20 billion had included developing the user segment as well. The space agency eventually kicked off this part in March 2017 with the announcement of a user development programme involving academia, research institutes and individuals for development of the user devices with a budget allocation of INR 135 million.

ISRO chairman K Sivan could not be reached for comments.

ISRO looks at JV for PSLV manufacture; launch to be privatized by 2020