Clock is ticking on the future of this planet. The old economic model of rapid growth is now recognized to be the fundamental cause behind the depletion of our natural resources. More importantly, the world is recognizing the need for a new roadmap for people, economy and nature in interdependence. Today, sustainability is the new frontier, offering growth opportunities of up to $10 trillion, with $3.6 trillion of opportunities in sustainable food, land & ocean use systems.

Countries like China and the US have outlined ambitious programs to ramp up government investments. They are spending to aid a complete renewable energy transition while creating jobs for their economies and strengthening their GDP. Despite these moves, we are simultaneously facing fears of global inaction on climate and biodiversity. Dubbed the best last change to chart a pathway to 1.5 degrees Celsius, COP26 proved a dismal failure with weak commitments from developed countries and dilutions on the need for global decarbonization.

Nature and the Global Economy

The need for incorporating the natural world in business and economic decision-making has never been more evident. Since 2020, climate and biodiversity risks have topped the World Economic Forum’s Annual Risk Report analyzing business perception of economic risk. Climate change has been costing the world over $150 billion annually since 2017. Biodiversity loss is set to disrupt agribusiness value chains. Climate vulnerable regions like South Asia are already seeing millions of internal displacements annually due to unusual cyclonic activity, extreme rainfall and flooding.

In 1997, Robert Costanza and a team of ecological economists published the first global assessment of the economic value of ecosystems services. In their assessment, this value was larger than the world’s GDP at the time: a grand total of $33 trillion annually. Since then, the idea that much of our global economic value is dependent on natural capital has moved from being a fringe idea, to a globally accepted one. In 2020, the Dutch National Bank published a report on assessing biodiversity risk and exposure in investment portfolios. The Dasgupta report on the Economics of Biodiversity, released by the UK Treasury last year, lays out how to incorporate nature in economics and policy decision-making.

A recent report by the World Bank estimates that failure to protect pollinators, fisheries and natural forests will cost the global economy $2.7 trillion annually by 2030. Better valuation of our natural capital is critical, but even more important is their integration with national accounts, as a repository of standing assets generating and earning value for the economy, even when not being mobilized into commodities. This includes the ecosystems services that remain invisible or undervalued in the economy such as water replenishment, soil nutrient cycling, pollination or carbon sequestration.

Seeding natural capital valuation will better enable the creation of national ecological budgets. Integrating environmental factors in the fiscal structure of an economy, especially the annual national budget, allows the government to track natural capital expenditure and invest for its regeneration. It offers policymakers the tools to incentivize new businesses by restructuring incentives, businesses and infrastructure that generates economic and ecological benefits.

Today, around 3.4 billion people are estimated to live in its rural areas, many in developing countries and most on the frontlines of the threats posted by climate change and biodiversity loss. The 6th IPCC Assessment Report points to just how bad this will be: crop failures are expected to increase, tropical fisheries are expected to decline by 40% and pastoral communities will increasingly lose their livestock to unusual heat and drought. Extreme weather, erratic rainfall and unusual heat have all contributed to declining agricultural yields for smallholder farmers. Unsustainable industrial agriculture practices are linked to increasing desertification of fertile soil and biodiversity loss in crop and pollinator species. A 2019 Assessment of biodiversity loss in food production by FAO dubbed this one of the biggest risks to global food security.

Despite this burgeoning crisis, adaptation finance for developing countries has amounted to only 25% of total adaptation & mitigation spending promised under the Paris Agreement. The global conversation on climate change has centered largely on urban communities and decarbonization pathways that largely benefit urban communities: electric transport, renewable energy systems and emissions reduction among industries. Investments in rural communities have largely been left out of the picture. The biodiversity crisis has barely attracted the same kind of attention and financial mobilization as climate change.

Action on both climate change and biodiversity loss is critical to build rural resilience for the coming decades. Livelihood programs must move beyond the traditional focus on agriculture and livestock towards a circular economy approach that includes nature-regenerative options like agroforestry, sustainable forestry, carbon sequestration and payment for ecosystems services programs. Ecosystem restoration and rewilding must take center stage, through programs that also provide for community incomes such as payment for restoration initiatives.

Investing in rewilding both agricultural and natural ecosystems can go a long way in mitigating the global crisis in rural employment and livelihoods. An estimate for the eight states constituting India’s Eastern Himalayas would generate earnings up to $64 billion annually over a 30-year period through agroforestry produce and sustainable bamboo against an investment of $3 billion. Investing these earnings back in the community could deliver universal basic assets such as healthcare, education, & energy, to over 6 million households – with spending on healthcare and education matching international OECD standards. For a primarily rural and agrarian region, these investments would go a long way to improving human wellbeing multidimensionally: recognizing the critical role ecology plays in their lives.

The next ten years are imperative to place ecology front and center in global and national action, to meet the world’s growing threats to its food, water and survival systems and its rural communities. Investing in a transition to ecology is economy is no longer optional: it is a necessity. 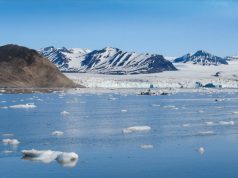 What are the six pillars of India’s Arctic Policy?