Introduction
The UNCED conference on environment and development as well as global conservation organizations, including RAMSAR convention, have identified the aquatic biodiversity to be the most threatened of all biodiversities. There is, therefore, an urgent and felt need to conserve the aquatic biodiversity including the ecosystem processes. Wetlands cover an area of about 5.5 million ha, of which 1.5 million ha enjoy complete protection and 1.6 million ha partial protection. India being a developing country supporting the second largest population in the world, having mainly agrarian economy, has a significant impact on all natural resources including that of wetlands. It is in this context, an inventory of the important wetlands is essential. The directory of Asian Wetlands (1989) lists 93 Wetlands of International importance in India. Information on the type and extent of wetlands is lacking in India. Hence, this information is a baseline requirement for forming protected area network and conservation.

However, so far in India there has been no systematic attempt to evolve conservation preserves analogous to terrestrial protected areas. While many developing countries such as China and south-east Asian countries have progressed substantially in formulating an action plan for conserving aquatic biodiversity, similar task of identifying such reserves for India is lacking. While a country like UK could designate 161 Ramsar sites, obviously India being a mega diverse country will have many more than the 20 sites presently identified by the national wetland programme. Such a task is daunting given the size, diversity of India. In this paper, we outline a possible approach for identifying important wetland sites taking into account the tremendous advances made in spatial technology tools. In particular, we demonstrate how tools of remote sensing and geographic information system combined with an extremely well coordinated and organised field programme could contribute to formation of a viable national level wetland conservation and monitoring programme. 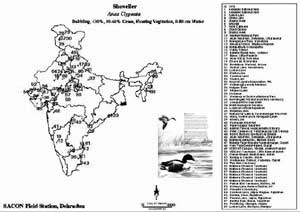 Issues and Applications
There are obviously a number of issues involved in evolving wetland conservation and monitoring programme. There are three major components. The first involves use of spatial technology tools viz, primarily use of remote sensing data to obtain actual location of wetland, inventory and classification of spatial data. The second issue relates to use of information on species distribution of birds, plants and socioeconomic issues related to the wetlands. The final issue involves integration of the data and information from the above two.

Inventory
The Ministry of Environment and Forests, Govt. of India, conducted the first nation wide survey of wetlands of India in 1980’s. This was done by a survey whose results were summarized in Wetlands of India- A Directory (Anon, 1990) while this inventory is a good beginning; it is obvious that more was needed for conservation work. The IUCN has categorised India as one of the Asian countries needing more comprehensive national wetland inventory than is presently available, because a vast number of unclassified wetlands are facing conservation crisis. Thus a more serious and systematic inventory is required. SAC and MoE&F have conducted an inventory of indian wetlands on the basis of Visual interpretation of Satellite Data. They have mapped wetlands which are 50 ha or above in size. These maps convey the spatial extent of the wetlands but do not give any information about the exact nature of Fauna and Flora and water quality. Thus these maps are not sufficient to assign conservation values to the wetlands. Various smaller wetlands required mapping due to their biological importance. Thus maps of smaller scale and greater information regarding the biological communities sustained by these wetlands are essential for classification and evolving long-term conservation strategies. In the ongoing Inland wetland project digital image processing of select states and districts are being done on 1:25,000 and 1:50,000 scales (Table: 1) while fieldwork for biological parameters of wetlands is carried out for all the states. Classification
The only serious attempts made to classify Indian wetlands on biological basis were done in late 1970’s and early 1980’s based on herbaceous and forested vegetations. Gopal and Krishnamurthy (1993) also suggested the classification scheme for Wetlands of South Asia based on vegetation types. But none of the above classifications took in to consideration other biological parameters like faunistic assemblages. Wetlands were also not taken into consideration while planning the protected area network for wildlife in India (Rodgers and Panwar, 1988), which was based on vegetation and land area. Thus there is a strong need to classify wetlands according to their biological components for conservation needs. A classification system has been proposed in the ongoing Inland wetland project for classification of wetlands according to their types and levels of turbidity and aquatic vegetation. This classification proved effective for classification of wetlands using satellite remote sensing data.

Integrated approach
Conservationists and all stakeholders in wetland sustainability believe that wetland conservation strategy requires an extensive participatory programme. The ongoing wetland mapping and conservation programme under MoEn&F, UNDP and SACON aims at developing such a user-friendly effective protected area network of wetlands in the country. Understandably, this is a project of very large magnitude and requires an enormous manpower and inter-institutional collaboration. A large number of individuals from NGO’s, academic institutions, professionals and birders have come together to make this possible. From amongst the various participant institutions and individuals, state level coordinators have been identified, who coordinating the fieldwork in their respective states. The field data enables prioritization of a set of wetlands from each state and constitute the countrywide network of inland wetlands.

Use of existing spatial information
The maps produced by SAC, Ahmedabad forms a baseline data at a reconnaissance level. Thus the inputs regarding area of wetlands-Pre/Post Monsoon, presence or absence of aquatic vegetation and qualitative information on turbidity levels are welcome additions to the MoEn&F questionnaire survey. Database of irrigation department and government agencies involved in major and minor irrigation and fisheries will also be a valuable input in such studies. Efforts should be made to integrate such data as inputs to management and conservation plans.

Socioeconomic Issues
Socio-economic values of wetlands for prioritisation of biological conservation sites are a very important aspect. The location of these wetlands, their nearest town or city, its biogeographic region, its present legal conservation status, and major use of the wetland to the local population are important inputs for conservation values.

Technological Advancements
The Inland Wetland inventory for the entire country requires to be carried out by making use of available data and also by fresh data generation using data on remote sensing. Remote sensing data has proved to be economic means for inventory, monitoring and management of wetlands. Satellite Data in association with geographical information system provide cost and time effective tool for mapping and formulation of conservation and management plans. Using Remote sensing data the spatial mapping is done and biologically important parameters are attached to it using GIS. Thus, by using digital remote sensing data it will be possible to map, analyse data and attain information at any scale for all wetlands, according to the management and conservation requirements. For reconnaissance survey satellite data of 20m resolution is very effective while for larger scale studies use of planned Cartosat data will be a better option.

In order to test this approach and formulate a viable programme of wetland inventors, a nationwide project has been initiated. This includes digital image processing of satellite data to identify the type of wetlands, turbidity levels and presence and absence of aquatic vegetation in various districts through out the country. The database of the work carried out by SAC has been used to create a digital inventory of wetlands using GIS. Using this database of centroid locations of wetlands, district and statewise wetland coverages were generated (figure: 1). Associated attribute data were also attached to these coverages. Keeping in view the gigantic amount of data customized graphical user interfaces (GUI) were developed to automize the process of coverage generation. These coverages and inputs of local individuals and institutions were used to select wetlands for fieldwork for their biological and conservational values. Database of the distribution of fauna and floral assemblages of the selected wetlands will also be converted into coverages (eg. figure: 2) for spatial depiction and related attributes attached to them using GIS. These inputs will be attached to the digitally processed remote sensing data for further analysis. Thus, all the information will be readily available at all scales to assign conservation value to the wetlands. The importance of the wetlands will depend on whether it is a good, rare and unique wetland type, its socio economic and cultural value, importance of the threatened and endemic species of plants and animals found in these wetlands. They also depend on the importance of the wetland in maintaining the genetic or ecological diversity of the area, whether the site is of crucial value to certain plants or animal species at a critical stage of their life history and the importance of it regarding the resident and migrating waterfowl populations. Such an effort requires first hand insights into problems and prospects using the modern spatial technology tools.

In order to achieve viable wetland conservation in the country a great deal of effort has to go in systematizing the inventories at desired spatial and temporal scales. Substantial extent of synergy can be established between various institutions and organizations involved in natural resource management, conservation and organisation involved in research and development. A permanent wetland monitoring authority analogous to forest monitoring organisations should be set up. A highly decentralised hierarchy of organisations built around using the voluntary effort of various NGO’s and individuals should be encouraged. Towards achieving this, appropriate models of use of spatial technology must be implemented.

Acknowledgements
Financial support from UNDP, New Delhi and support of Ministry of Environment and Forests, Govt. of India is gratefully acknowledged. Thanks are also due to Dr. M.L.Manchanda, Head, RRSSC-D and Shri S.Adiga, Director, NNRMS, Dept. of Space, for RRSSC facilities.
References