Chuck Herring is the director of marketing communications for DigitalGlobe in Longmont, Colorado. He has over 10 years experience in the commercial satellite imaging industry.

Chuck Herring is the director of marketing communications for DigitalGlobe in Longmont, Colorado. He has over 10 years experience in the commercial satellite imaging industry. He started with DigitalGlobe in 1995, then called EarthWatch and has been involved with the startup and commercial roll-out of DigitalGlobe. He shares some of his opinion about the high resolution imagery industry with GIS Development

What all are the activities in the field of Remote Sensing (RS) that DigitalGlobe has been into since its establishment? How has been the experience so far?
DigitalGlobe was founded in 1992 as an Earth imaging and information company. That same year, it was the first company ever to receive a high-resolution commercial remote sensing license from the U.S. Government under the Land Remote Sensing Policy Act. With the launch of its QuickBird satellite in October 2001, DigitalGlobe became the world’s highest resolution commercial satellite imagery provider, offering images with 60-centimeter resolution. Today, DigitalGlobe employs more than 350 people and is leading the industry into the next generation of commercial satellite imaging with the planned launch of its WorldView system no later than 2006.

DigitalGlobe has not been immune to the risks associated with building and launching satellites. The company’s first two failed attempts at launching QuickBird were significant events – and could have meant failure for DigitalGlobe as a company. However, the vision and persistence of DigitalGlobe’s management, in addition to their passion for the success of the commercial remote sensing industry, have led DigitalGlobe into its world-class leading position.

DigitalGlobe has worked in about 30 different markets to date and has seen about a 40% growth year to year in the commercial markets. These markets include forestry, agriculture, energy, engineering, visualization, and many more. The revenue numbers may not have been what many had originally predicted, but they have grown by strong percentages over the last two-and-a-half years of our operations.

What technological edge does DigitalGlobe enjoys in RS technologies?
The QuickBird spacecraft collects the world’s highest resolution commercial imagery of the Earth, and boasts the largest image size and the greatest on-board storage capacity of any other satellite. The 60-centimeter resolution of QuickBird images allows objects on the ground as small as 60 centimeters – or two feet – across to be seen. DigitalGlobe’s ImageLibrary houses the most comprehensive, up-to-date images available in the world. Since January 2002, QuickBird has collected and stored in its ImageLibrary hundreds of thousands of image scenes covering hundreds of millions of square kilometers. The satellite collects an additional one million square kilometers each week.

Have any collaborative arrangements been made by Digitalglobe in which it has worked with public agency while working on RS projects?
DigitalGlobe has worked with several different public agencies including the federal and local levels, and all have worked out extremely well. One example is our work in the local government market. As we started to develop more long term partnerships with some local government agencies, we quickly realized that we had to change our pricing and licensing for this market, because our existing licenses were too restrictive to accommodate government agencies that need to share data and information products across different agencies. Working in partnership with local government, we adjusted our licensing policy by developing long-term subscription models to help accommodate local government requirements. We also work collaboratively with our business partners around the world to understand their regional requirements, and adjust our offerings on a regular basis to better fit customer needs.

High-resolution imagery and satellite data is a sensitive issue as far as a country’s security is concerned. How has the company been addressing such security and defence related issues?
To manage the distribution of sensitive imagery, DigitalGlobe adheres to U.S. policies as well as established company policies. DigitalGlobe complies with all U.S. Government regulations and restricts access to imagery as required.

DigitalGlobe also takes the threat of terrorism very seriously and has policies to avoid the release of sensitive material. DigitalGlobe checks all new potential customers against a “Denied Parties List” supplied daily by the U.S. Government before selling imagery. DigitalGlobe also restricts distribution of imagery where national security is at risk or where U.S. assets overseas may be placed at risk. Finally, DigitalGlobe will not release any sub-meter-resolution imagery within 24 hours of its collection, allowing the U.S. Government to put a hold on potentially dangerous imagery and exercise standard operational security.

Kindly update us on Worldview and its technological advancements?
WorldView will be the world’s only commercial satellite to snap pictures of the Earth at 50-centimeter resolution. The satellite’s higher orbit of nearly 800 kilometers (compared to QuickBird’s 450 kilometers) will allow it to revisit collection areas more frequently, letting customers repeat their image acquisitions about once a day. The WorldView system will include more efficient image processing systems and multi-satellite collection planning, shorter tasking timelines, and an expanded network of remote ground terminals. DigitalGlobe’s imaging constellation combining WorldView and QuickBird will be capable of collecting more than 4.5 times the imagery of any current commercial imaging system. By late 2006, WorldView alone will be capable of collecting nearly 500,000 square kilometers (200,000 square miles) per day of half-meter imagery. WorldView is being built by Ball aerospace & Technologies Corp. and continues to be on schedule to be operational in 2006.

Any case-studies that the company would like to highlight?
All of DigitalGlobe’s case studies are posted to the online Press Room, which is regularly updated with new articles highlighting customer applications. The address is (click on Media Kit, then Customer Testimonials).

What are the other major application areas where RS can be used for the benefit of the public at large?
High-resolution remote sensing data has uses in countless application areas. The public may be most interested in local government applications, such as transportation planning, economic development, infrastructure management and environmental preservation. Many local government agencies in the U.S. have Web sites that display remote sensing data online along with other GIS tools, so that public constituents can view and “fly-through” image scenes in 3-D. The public has also shown tremendous interest in viewing remote sensing data of locations around the world that have been affected by a natural disaster such as an earthquake, hurricane or wildfire. Displayed on T.V. news programs and in the newspapers, remote sensing images quickly illustrate how a disaster has impacted an area’s landscape, infrastructure and local communities. In addition, many of our business partners, such as Keyhole and GlobeXplorer, deliver our products that the public-at-large can access. Keyhole is a relatively inexpensive and robust tool for putting several remotely sensed data into an easy-to-use visualization tool. GlobeXplorer puts our data into a database from which people can download a reasonably sized jpg image file or purchase a poster. 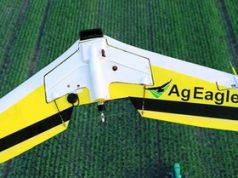