Introduction:
Fire risks in urban areas have undoubtedly increased over the years and the rising cost of fire losses would seem to indicate that they are increasing at a greater rate than the measures devised to control them. Due to the rapid increase in population, industrialization, rapid rise in new colonies, construction of high rises etc the fire risk in the cities has tremendously increased.

Pune city is growing at a very fast rate, the city core, containing a major share of residential as well as commercial development, is marked by high densities, narrow roads, heavy traffic and paucity of open spaces.

The present study was aimed at achieving three objectives:

The rights of ways for roads was incorporated into the roads layer by creating a turntable in Arcview through Avenue scripting as Arcview does not provide a means for the generation of a turntable for a network through it’s GUI.

Map animation:
A map contains lot of information that can be used by different individuals and organizations. “A map is the greatest of all epic poems. Its lines and colors show the realization of great dreams.” Gilbert Grosvenor, Editor (1903-1954), National Geographic.

Map Animation is a visualization tool that goes beyond conventional static point mapping, avoiding potential large data loss when the time dimension of datasets is aggregated. The use of animation as a means of data presentation and visualization of information is increasing with the diffusion of ‘multi media technology’. Map Animation techniques have been applied in the social geography arena to analyze crime incidents, epidemiology and urban growth. In the current study an attempt was made to visualize the fire incidents and their spatial and temporal patterns in the form of an animated map. It was hypothesized that patterns across space and time would be evident in the fire incident database. Arcview 3.2a was used to test this hypothesis.

1) Map animation
The fire incidents layer (point map), the roads layer and the river layer was used in the production of the animated map. This was achieved through Avenue Scripting. The basic algorithm adapted for generating map animation was as follows:

Step2) Choose a suitable time interval for the animation,

Step3) Generate a map for each time interval,

Step4) Group the maps together in sequence to produce an animation; using a suitable animation software (the software used in this study was Animation Shop Pro version 3).

The technicalities of operationalising this algorithm are not difficult. In this study a simple Avenue script was written to generate the individual map frames for each time interval that was provided in the script (a one hour time interval was chosen for the present study), saving them to small graphic files (exporting the view document to JPEG format) before feeding them to the animation software. The resulting map animation can be played back independently of its creation using a suitable animation player like windows media player, which is part of the standard windows installation. The algorithm was developed with some modifications from an earlier study done by Martin Dodge(1996).

3) Custom application development:
Arcview’s Dialog Designer extension was used to create the dialog boxes and avenue scripts were attached to them for performing given tasks. For the automation of Network Routing, buttons and tools were added to the View document and the roads information dialog box was created using label buttons, tools and listboxes. A roads information module was also incorporated because of the availability of very detailed roads information, with built in queries, which would enable the user to get information about a particular road on the click of a button.

1) Map Animation:
It was hypothesized that patterns across space and time would be evident in the fire incident database. Arcview 3.2a was used to test this hypothesis.

Spatial concentration:
Previous research provides strong evidence that certain types of fire incidence are spatially concentrated. It was observed that in certain areas the number of occurrences was fairly high to observe the spatial trend. These were the areas that were highly congested, mostly slums and areas of high densities. The high-class localities showed a remarkably less number of fire occurrences. Clusters were evident in the city center, which is highly congested.

Temporal Patterns:
Incidents are not evenly distributed over time, with distinct concentrations at certain periods. There is also a marked variation in incidents in terms of time of day. For all types of incidents the peak is between about 11 to 12 and 16.00 and 20.00 hours, with very few incidents during the 24.00 to 08.00 period. This is closely related to activity patterns of the mass of the population.

2) Efficiency of the existing Fire Station Network:
The efficiency of the existing Fire Station Network was calculated on the basis of the minimum response time in minutes required for the fire stations to serve the whole study area. The speed of the vehicle was assumed at an average of 30 km/hr. Using Arcview’s Network Analyst Extension’s Find Service Area function maps were generated for different response times viz.,3,4,5,..11 minutes. It was found that the four fire stations were able to serve the whole area in a matter of 11 minutes.

3) Custom application development:
The custom project was divided into two modules viz., the Fire Emergency Module and the Roads Information Module. The former gives routing solutions on the input of point of incidence and the latter having detailed information about roads and built in queries.

Given is an illustration of the animated map (one of the total 48 frames generated with a time interval of one hour.) Figure 1: the animated map showing fire incidences.
Map animation is a simple but effective technique to assist human visualization and exploration of a space-time dataset; it will not find patterns (if there aren’t any) in the data by itself. There is also the danger that any pattern observed could simply be an artifact of the map animation process.

2) Efficiency of existing fire station network:
The minimum response time for the four fire stations to serve the area is 11 minutes, which according to Indian standards is acceptable, but there is a major scope for improvement and it can be brought down to 4 minutes, which complies with international emergency standards with allocation of one fire station. 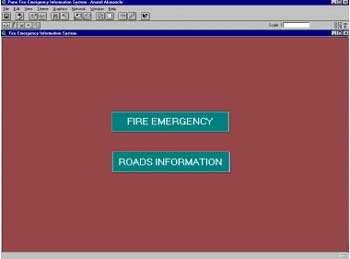