The wise leadership of UAE and from its extreme interest in protection of national security and deep future vision, represented by His Highness Crown Prince of Abu Dhabi and Deputy Supreme Commander of UAE Armed Forces, decided to establish a National Ground Receiving Station “Space Reconnaissance Center” to directly receive high resolution satellite images, to insure rapid and independent reception of images that will be utilized in protecting national security, supporting regional and global peace and civilian application of images by UAE government organizations.

Vision
The UAE Space Reconnaissance Center (SRC) brings the technology and experience to turn data into actionable information, leading to information superiority in the 21st century. 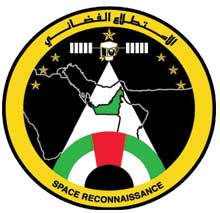 Information Superiority- Now and in the Future
New technology has made a dramatic and powerful impact on the means available to support National Security objectives. The SRC operates systems that assist in the Early Warning, Monitoring and Security missions of the Armed Forces for the country and the region.

The UAE SRC has an aggressive technology insertion program. All programs and activities are built around the concept of flexibility, in order to add new technology as it becomes available, and continually improve on the techniques used today.

Universal Ground Station
A peculiar high-end technological center for receiving and processing imagery data, the SRC is a turnkey remote sensing system which employs advanced capabilities for tasking, receiving, processing, analyzing satellite and aerial imagery data and making relevant reports that will be rapidly handled to commanders to help taking proper decisions for the situation.

The Universal Ground Station is composed of four key segments:

Satellite Constellation
The Universal Ground Station is capable of receiving imagery data from a constellation of satellites, nowadays including: IKONOS, IRS, and KOMPSAT.

There are some other data sources like aerial and UAV images; collected by F-16, Mirage 2000 and other aerial / UAV platforms, the data of which can be manually ingested into the system. The Universal Ground Station systems was carefully designed to accommodate future developments; adding other existing satellites such as SPOT and near future satellite systems.

Production
Diverse products are generated in response to requirements for timely, accurate and actionable information critical to the National Security and in support of the specific needs of the Armed Forces. The production segment utilizes latest image processing software and hardware necessary for production of all possible imagery products and relevant information, and hence, provide end users in military units and government organizations with their needs.

The SRC is electronically linked to the different armed forces units to insure timely delivery of the required data and information. Data is held in an archive and can be retrieved and returned at a moment’s notice. Products include corrected images, orthorectified images, digital terrain data, color merged images and image mosaics.

End Users
The SRC end-users include: Directo-rate of Military Intelligence: The SRC is the main source of imagery information for DMI. DMI integrates imagery data with other data sources to extract valid intelligence information.

Air Force Air Operation Center: The SRC provides AFAOC with imagery that the latter integrate with the real time radar data that its generates which provides a better visualization air picture.

The Air Force Strategic Analysis Center: AFSAC integrates a suite of multi-echelon combat simulations to provide realistic training to Commanders and their staffs.