Satellite-based positioning has been experiencing a rapid evolution in recent years due to the inclusion of two new Global Navigation Satellite Systems (GNSSs), the Chinese BeiDou and the European Galileo. These two new systems are still under development to offer a worldwide anytime positioning service along with the existing giants, the US GPS and the Russian GLONASS. The two existing systems have also been undertaking modernisation programmes due to the reliance of more and more applications to GNSS services, more demanding requirements from users, and the need to mitigate interference and disturbances to the radio signals used by these systems.

The digital IF data are then processed by a signal processing unit whose main responsibilities include signal acquisition, code and carrier tracking and data demodulation. The demodulated data and the resulting pseudorange measurements are then utilised by a navigation processing unit in order to offer a Position, Velocity and Timing (PVT) solution, along with some other relevant information. The software-defined receiver differs from a conventional receiver in the sense that the functions of the processing and navigation units, including correlation/tracking and navigation tasks, are delivered by software, leading to a more flexible design with potential savings in cost and power. A software-defined GNSS receiver platform, FGI-GSRx, has been developed at the Finnish Geodetic Institute for the analysis and validation of novel algorithms for an optimised GNSS navigation performance. The basic version of FGI-GSRx is based on an open-source software receiver platform [2], and it has been adapted recently to be BeiDou-compatible with a dual-frequency front-end from Nottingham Scientific Limited (NSL). The NSL front-end, ‘Stereo v2’, is used to capture the BeiDou data. 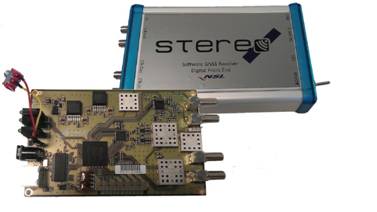 Live Data Collection
For the purpose of demonstrating the capability of the FGI-GSRx with BeiDou signals, BeiDou data was collected on January 31, 2014 at around 9:30 AM UTC time at a static position with a roof antenna at the Finnish Geodetic Institute, Kirkkonummi, Finland.

There are 1 GEO satellite (PRN 05), 3 IGSO satellites (PRNs 7, 9, 10), and 3 MEO (PRNs 11, 13 and 14) satellites available at the moment of data collection. The FGI-GSRx receiver can acquire, track and compute a navigation solution with all the visible satellites.

A novel long coherent acquisition scheme in the presence of NH codes was implemented to FGI-GSRx to acquire the BeiDou satellites [4]. Acquisition metric for the available BeiDou IGSO and MEO satellites The error statistics were computed for a stand-alone code-phase based position solution after applying standard environmental error corrections with the broadcasted parameters from D1 navigation messages. The ionospheric grid parameters transmitted in the D2 messages by the BeiDou GEO satellites (i.e., PRNs 1-5) cannot be utilised in Finland due to its location at high latitude (above 600 N). The position error statistics were computed with respect to the known true position. The horizontal and vertical mean errors for the above dataset were 2.68 and 11.23 meters respectively with a mean PDOP (position dilution of precision) of 2.07. The developed FGI-GSRx software receiver is a unique platform in Finland for analysing the current and new GNSS signals. Work is currently under progress on developing a multi-GNSS navigation solution with three different GNSS constellations, the GPS, Galileo and BeiDou, by utilising their software receiver platform. The multi-GNSS navigation solution will offer a better availability, accuracy and reliability due to the increase in the number of visible satellites.