Some of Australia and New Zealand’s middle suburbs are planning a different future that is rich in growth and regeneration in a strategically sustainable manner. By Dr Stephen Glackin

Imagine leafy green middle suburbs filled with old housing stock. They are ripe pickings for developers and time-poor local government urban planners keen to stamp approval and redevelop. Many of these were once elegant communities with thriving young families and activity. In more recent times the children have left and the housing is at the end of its life. They backyards are being in-filled with small units and an occasional high rise, and the area is struggling to cope with public services and poor infrastructure maintenance. There is no other plan for the future. Is this the only reality? Some of Australia and New Zealand’s middle suburbs are planning a different future for themselves, rich in growth and regeneration in a strategically sustainable manner. This type of urban growth leads to efficient infrastructure and better communities. This is the story of Greening the Greyfields.

Greening the Greyfields is a project conceived by Prof. Peter Newton (Swinburne University) and Prof. Peter Newman (Curtin University) and funded by the CRC for Spatial Information (CRCSI) in 2011. It flowed from independent research by both professors who both identified the middle suburbs of Australian cities as the critical areas for growth via urban infill. The regeneration of the middle suburbs was presented to the Major Cities Unit at a professorial meeting in Sydney in March 2011 as a critical challenge for sustainable urban development.

The project set out to create a new way of developing cities, so these cities could house significant population increases in a sustainable fashion. The term Greyfields was created by Prof. Newton in his seminal 2010 Built Environment paper and refers to the middle suburbs of Australian cities; places where the housing stock is ageing and being replaced by newer, more intensive housing developments, that have better sustainability performance. 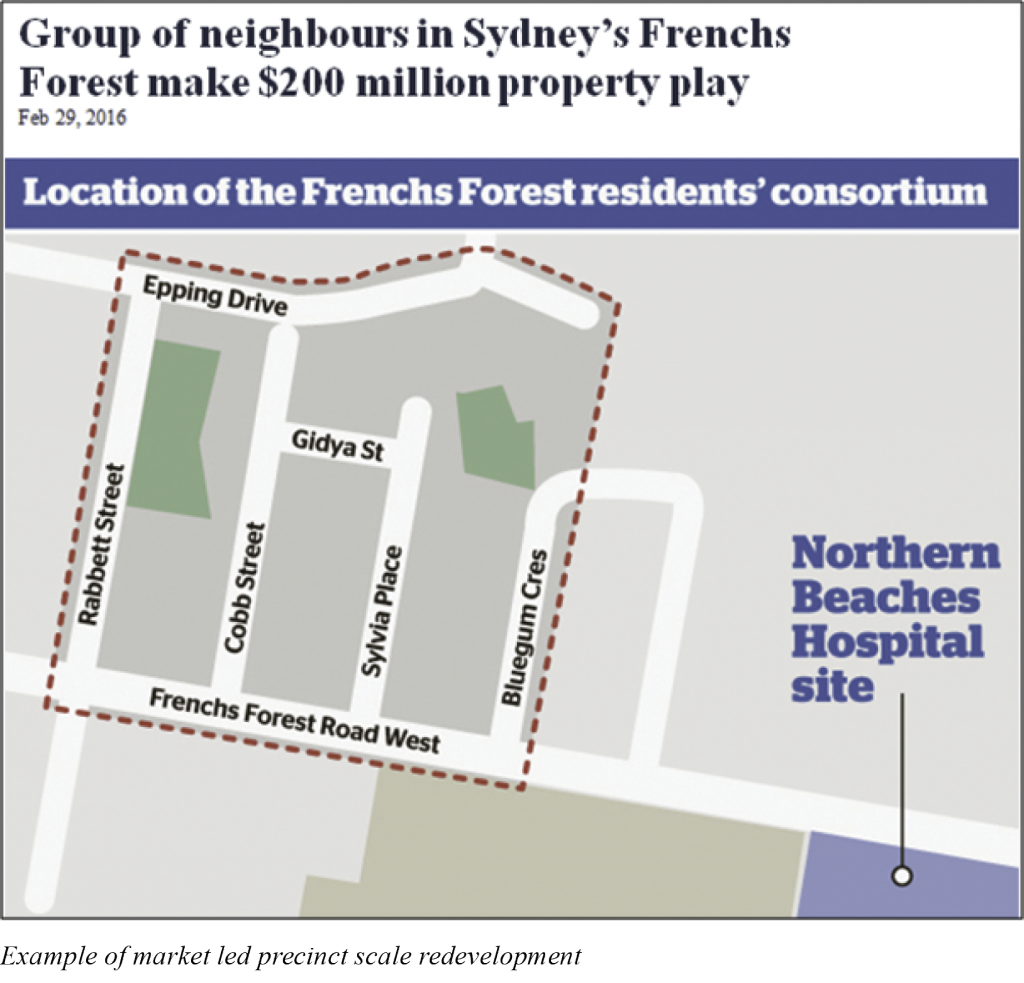 The volume of change in these areas is staggering, but it is not occurring in a strategic or organized fashion. Unlike Greenfield (urban fringe housing developments) and Brownfield (ex-industrial housing development), Greyfield redevelopment occurs on small, individual lots of land, and there are many instances where planning has led to inefficient use of land and expensive, ad-hoc, infrastructure supply. Also, unlike Greenfield and Brownfield developments, there is no set redevelopment model for anything other than developing individual lots. The two professors sought to address this problem. 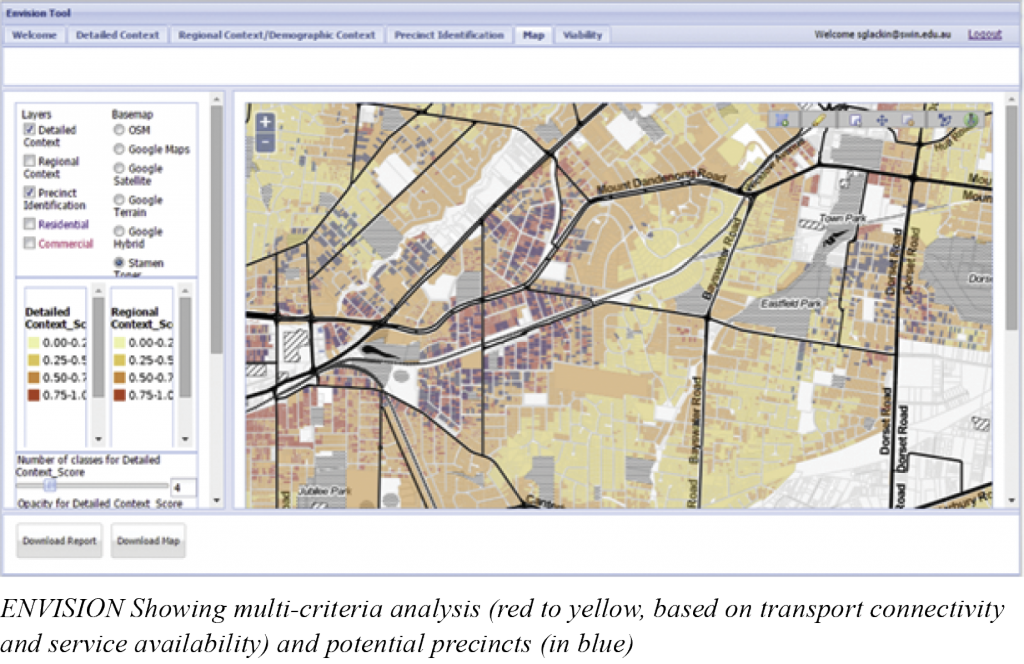 A critical second stage of the research was articulated by Prof. Newton who scoped the key elements of a spatial tool designed to indicate where redevelopment was most likely to occur. With the involvement of Dr Stephen Glackin, a research fellow at Swinburne University, a prototype GIS system was developed. This system allowed local government planners to identify areas that were most probably going to go through significant change in terms of housing redevelopment across whole precincts or suburbs. This tool allowed users to see where highly redevelopable dwellings would cluster; and where there could potentially be “regeneration precincts”, or areas where landowners could work together to get larger scale and more sustainable redevelopment.

The prototyape software was developed into ENVISION. This is a robust online GIS tool allowing users to combine data from multiple sources and identify areas of high strategic importance and also land parcels that have a high probability of redevelopment. This tool also allows users to perform rudimentary financial analysis; comparing the development costs to median values and volumes of sales in that area. This system connects data for six Australian municipalities. The successful uptake of this system led to interest from Christchurch City Council and the University of Canterbury in New Zealand, which saw Prof. Simon Kingham and Dr Rita Dionesio join the project. Data layers for Canterbury were introduced into the tool. 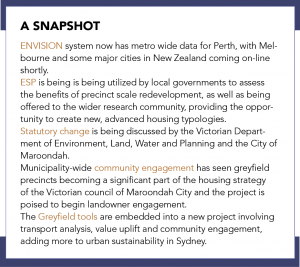 A stripped back, metro-wide, version of the tool is now available at www.greyfieldplanning.com.au.
The third stage of the research is the implementation of a 3D visualization and analysis tool, allowing users to design and then assess a variety of precinct scenarios. Workshops with potential end users were held in Australia and New Zealand (Perth, Melbourne and Christchurch) to determine the systems’ specifications. Close stakeholder cooperation produced the Envision Scenario Planner (ESP) system and over 150 housing typologies, pre-assessed for embodied and operating carbon, energy use, water use, heating and cooling, stormwater capture, additional traffic produced and the capital and ongoing financial cost. Each typology was assessed for Western Australia, Victoria and New Zealand, and rotated through 360 degrees, x and y, to capture the effect of dwelling orientation. The tool allows planners and land owners to re-design potential precincts and assess the benefits of various scenarios over business-as-usual approaches. 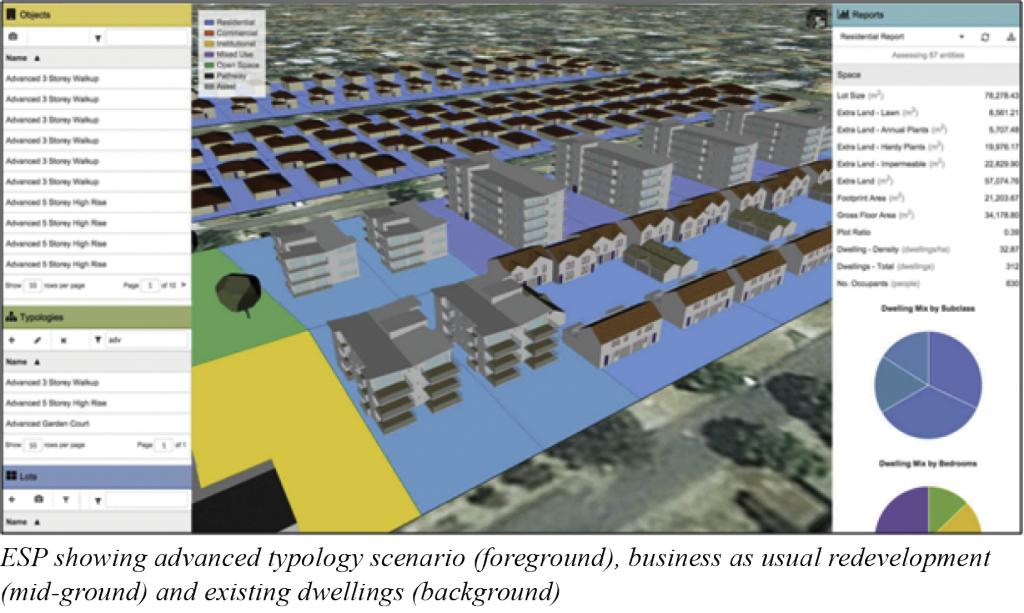 The final stage of the research has identified and addressed many of the current barriers to these tools producing on-the-ground change. This stage examined the statutory changes and level of community engagement required to allow precincts to become a viable option for landowners. So far, it has produced draft zones and overlays, which, when implemented, will allow local governments and landowners to negotiate outcomes that are mutually beneficial. It has also developed landowner engagement policies that are being rolled out in test municipalities. The project is coming to an end in June 2016 and will focus over the next 24 months on applying the greyfield tools more broadly across member cities, and begin rolling out the system into other Australian and New Zealand cities.