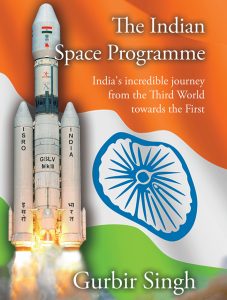 The Indian Space Programme is a very interesting read. The book describes the evolution of India’s activities in space in the context of Indian and global scientific and technological evolution. Reading the book is like walking down a broad avenue and exploring interesting side streets that appear from time to time. For example, the chapter on the rise of National Space Programmes opens with Tipu Sultan and his rocket battery and explores its improvement by Sir William Congreve and its subsequent use by the British in various battles including the American War of Independence. An interesting aside is the chapter on India’s unknown rocketeer, Stephen H Smith who experimented with rocket mail in the 1900s in Calcutta and Sikkim.

The rise of rocketry during and after WWII covering legends like Goddard, Korolev, Oberth, Tsiolovsky and of course Von Braun are discussed and their contribution to the development of rocketry for both war and peace are highlighted. Vikram Sarabhai is introduced as a contemporary of Korolev and von Braun and as the man who, though not a rocket engineer, dreamt of Space for India.

The second chapter traces the growth of astronomy in India from Vedic times through the middle ages up to the renaissance in Europe which coincided with the colonial consolidation in India. One of the features of this period is the opening up of several modern observatories in India to serve the East India Company and later Great Britain. One of the significant outcomes of this period is the Great Trigonometrical Survey. Subsequent chapters describe the rise of Indian scientific institutions in detail both in the pre Independence and post-independence periods. This includes Indian scientific organizations like the Aligarh Scientific Society, the Indian Association for the Cultivation of Science and the Astronomical Society. Life and contributions of leading Indian scientists starting with J.C. Bose and including Homi Bhabha and Vikram Sarabhai have been covered in detail.

The role of Bhabha and Pandit Nehru, the then Prime Minister in putting India on the Space Map is discussed at length. It was Bhabha who appointed Vikram Sarabhai to lead INCOSPAR which was later to become ISRO. Physical Research Laboratory was the cradle where INCOSPAR and later ISRO were nourished. INCOSPAR was formed to consolidate India’s contribution to COSPAR, an international body set up in 1958 to focus on international cooperation in space research. This is where the story of India’s leap into space begins.

The book explores the many twists and turns, successes and failures of TERLS which started so modestly in the Church of Mary Magdalene in a little known hamlet called Thumba. In this narrative the introduction of the space activities of Pakistan is a bit jarring and out of place. Perhaps the author wished to contrast the space activities of the two newly independent nations but it really doesn’t fit into the sequence of events. Also the inclusion of SITE in this chapter of the initial years is equally jarring. In fact, SITE and INSAT studies were contemporaneous and deserved a separate chapter.

ISRO Centres are dealt with in detail in Chapter 8 but the inclusion of Antrix in this section is misplaced. Antrix is not a part of ISRO and could have been dealt with in the chapter of commercialization. Nevertheless, the story of Antrix is also the story of the coming of age of India’s space program. The author’s bias towards rockets becomes apparent again with three full chapters on SHAR, launch vehicles and the saga of the development of cryogenic engines. The treatment is detailed and very informative.

ISRO’s Earth satellites and their applications, in contrast, are covered in one chapter entitled ‘Satellites and Saris’. The title is rather confusing and the coverage, though comprehensive does not do justice to the achievements of ISRO in terms of peaceful uses of remote sensing, communications and broadcasting. Again, IRNSS gets a full chapter as does Human Spaceflight which as the author himself point out, is not on the priority list of ISRO activities. The chapter on Moon, Mars and Science gives an excellent account of these missions. The kind of in depth recounting is missing from ‘Satellite and Saris’.

Space and National Security is dealt with sensitively. The dilemma of Peaceful Use of Outer Space promoted by Vikram Sarabhai and the demands of the protection of the nation is well covered. The symbiotic connection between ISRO and DRDO cannot be wished away but nor can the fact that India has played a leading role in three UNISPACE conferences which deal with the peaceful uses of outer space.

Overall, the book is very interesting, not only for its compilation of ISRO facts but also because it gives a synoptic view of India’s space efforts in the background of geopolitics and national perceptions. Definitely a book worth buying to complement the several other books that are being published on the same topic by retired ISRO personnel.