Abstract
Long term project of Czech historical monuments documentation has been started at the department of Mapping and Cartography, CTU Prague. The most important part of the project will be the database of photogrammetric images, mostly created in compliance with recommendation of CIPA web page (Waldhäusl, Ogleby). The results of the CTU Photogrammetric Laboratory projects (cooperated with the State Institute of Care of Historic Monuments and with the Laboratory of Quantitative Methods of Monuments Research, Faculty of Nuclear Physical and Physical Engineering) from last 5 years will be included into newly established database as a first step. Generally, the data being compiled in this project are of heterogeneous nature (images, texts, coordinates, plans etc.) and it is difficult to foreseen all possible future needs. For description of compiled data we are going to use Extended Mark-up Language (XML) which we suppose to be the best tool available for description of structured data independently on the software being currently used. Web presentation and searchable database of the project data will be derived from the XML documents.

XML Language
The database of the historical monuments of the Czech Republic will be composed of digital photogrammetric pictures together with other information mainly of the textual nature. We expect that each historical monument will be treated as an independent project and that all information collected is going to be available on the web. This middle term project is going to be maintained during several years. Because we have not had practical experience with such a kind of project, we decided to describe the data using XML language (Extensible Markup Language). We believe XML to be the best and the most flexible tool for the task we are heading for. XML is one of the markup languages designed for communication and description of data and generally it is supposed to be the fundamental language in data communication in the Internet in coming future. The XML language is closely related to the HTML, which started new revolutionary chapter in the development of the Internet. Both languages are derived from a more general language for data description SGML (Standard Generalised Markup Language). As is generally well known, HTML markup language defines mainly contents and structure of web pages and only in a lesser degree how the document will look. During the process of its development new tags have been added to the HTML versions to fulfil the growing needs and demands of its users. This resulted in a series of HTML versions and compatibility problems arising mainly from the usage of non-standard proprietary constructions. The HTML is a language with a given set of tags. XML language on the other hand defines clear and relatively simple syntax (XML is a subset of SGML) and user defines his own tags and rules for their usage. Because of relation of both languages, the conversion from XML into HTML is relatively simple and various conversion tools are available. Diversity of various HTML versions should be replaced in future by the XHTML language, which can be roughly characterised as an HTML with XML syntax. In our project we will have the possibility to offer users searching in the database of historical monument. Apart from others, the orientation on XML enables us to postpone the choice of concrete database system into future. Inputs into database are going to be generated from primary XML data. Technically speaking we can suppose each project (the information about an historical monument) to be stored in one directory on the disk in which digital photogrammetric images are going to be stored. Each directory will contain one XML project file describing all information about the given project. Let us suppose that the name of this file is project.xml. As we have mentioned earlier, it is typical for the XML that users define their own tags. In our case the root element might be . Thus the project.xml file would contain the basic construction:

In the previous example the title is an attribute of the tag project. Each project is going to be briefly described in annotation. In XML description of historical monuments we can use tag “annotation”.

St. Vitus Cathedral is situated on the Prague’s Castle …

Suppose that we have a set of photogrammetric images of the cathedral named svcat001.tif, svcat002.tif, … etc. We can simply describe them in our XML project file by relative locations in our project directory.

St. Vitus Cathedral is situated on the Prague’s Castle …

This way we can add other XML tags and attributes needed for description of the projects. The value of the attribute “id” in the tag “camera” can be used as a link elsewhere as in the tag image in the previous example. It is clear that the information must contain spatial localisation such as coordinates, district, town etc. We can summarize the basic idea of our approach as follows. First of all we are going to collect and classify them using XML tags as we have tried to explain in the previous example. WWW pages are going to be generated by software from primary XML data (as well as database records needed for search operations). The most important advantage of the present project stage of the is that technical questions and programming can be postponed and solved later. Should the need of restructuring of the XML description of our project arise in future, it would be easy to convert the gathered data into a new format because of clear XML syntax. The same holds for the HTML presentation, which we are not solving now. The necessity of basic change of XML format, we believe, is unlikely (adding definitions of new XML tags is not a problem). We have gained practical experience with XML as a data description language in the filed of geodetic network adjustment in last two years.

Projects
In the Czech Republic, there are lots of monuments of various architectonic styles. The Laboratory of Photogrammetry and Lab. of Quantitative Methods tackle in this time typically 4-6 projects per year. This number is not sufficient. For a good database filling, more than 100 projects per year will be good. This can be realised only with help of students and by using of simple digital photogrammetry. In this case, a simple technology for object documentation (3×3 rules for Simple Photogrammetric Documentation of Architecture, Waldhäusl, Ogleby ) is used.

Example: Professional full documentation – the Romanesque church in Rovná
This church is located near Stríbrná Skalice village about 50km far from Prague. A typical Romanesque building (18x10x20m) from the end of 12th century has a baroque tower. The interior is decorated with Romanesque paintings. At present, the building and the paintings are in restoration as a valuable historical monument (a part of expenses is charged by Getty’s Institute). Photogrammetric documentation was taken by using UMK and RolleiMetric cameras following by completely digital data processing. 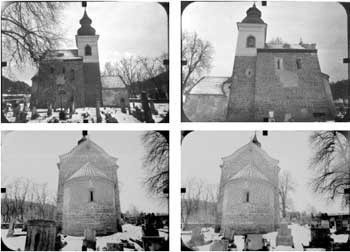