The ESRI User Conference 2002 touted as the ‘largest’ gathering of GIS users on earth began this Sunday. The conference is spectacular due to the fact that more than 11,000 visitors and over 250 exhibitors attend this event.

Being the first time visitor to this event, I had mixed feelings. I felt awed, pleasantly surprised, and sobered by what I saw. I was awed by the sheer number of people attending it, pleasantly surprised to meet many I knew in the field and sobered to observe that perhaps more than 90% of the attendees are from US and people are still talking of the areas in government and elsewhere where GIS has the potential to be used but is being not. 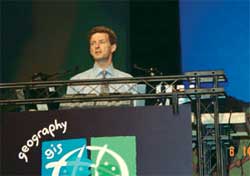 Dr David J Maguire addressing the conference
The conference started as usual with the legendary plenary address by Jack Dangermond, where he highlighted that ESRI agenda was to make GIS more advanced and more useful for the people. I think that ESRI conference stands out in comparison with other conference since their whole focus is on building relationships, building communities. The software product sale is projected as being a by-product of the above and not the vice-versa. Jack announced some major initiatives like the ESRI’s foray into web services through ArcWeb USA, ESRI’s partnership with SAS, a market leader in business intelligence, launching of new interface and functionalities in the Geography Network. Jack reported a financial growth of 22% for ESRI and said that it was a ‘sustainable’ and ‘successful’ privately held company with zero debt unlike many other ‘weird’ companies in the business. 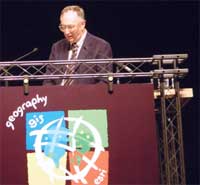 Dr Jack Dangermond delivering the Plenary Address
After Jack’s address, David Maguire and his team turned out to make presentations on the detailed updates of their products with some key users showcasing live applications. 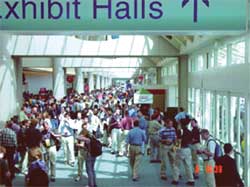 Exhibition Hall
Cynthia Moss, “the Elephant Woman,” whose trip to East Africa more than 30 years ago became a career devoted to studying elephants and working for their conservation, delivered the keynote address in the evening. This address being given from an application specialist perspective was a refreshing one.

The Map Gallery in the evening was a huge ‘mela’ where thousands of ESRI users had displayed maps. The gallery was divided in major themes like Defense, Environment, Transportation, Business etc. Many people were too tired by the evening, but no one seemed to complain. Besides that a special hall was dedicated to the MyCOE—My Community, Our Earth programme, which was launched at last UC. It showcased GIS and sustainable development efforts under way worldwide. Exhibits included the results of the Geographic Information for Sustainable Development project, the Amboseli Elephant Research Project, and the efforts the United Nations Environment Programme.

ICIMOD form Nepal was in the big way at this section. Other functions in the evening included meeting the authors of Salton Sea Atlas (a collection of maps and information about the inland California sea developed by the Design Team from the Redlands Institute, University of Redlands, using GIS and other tools to communicate complex information). There were also special exhibits from NASA, Use of GIS in recovery of New York City after September 11 and Enterprise GIS at USGS.