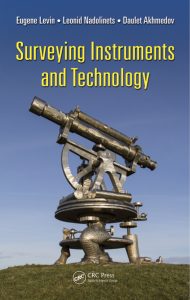 One would imagine that a technology like surveying, being so old, would not have been touched by modern technology. Well, such an assumption would be wrong. The book, Surveying Instruments and Technology brings out the extent to which technology has impacted instruments being used in modern day surveying. It is an excellent treatise for students and a reference book for practitioners. The coverage is very wide from prehistory represented by a stone engraved map from Spain to the modern age of GNSS and UAVs with all other technologies in-between. This coverage of technology from the earliest days of surveying and its evolution into modern instruments is well covered.

The chapters on optical instrument ranging from levels to total stations cover the entire gamut from the simplest to complex instruments including laser assisted instruments and digital readout systems. The treatment of each device is discussed in therms of accuracies, reliability and limitations. Even instruments which are now becoming obsolete are given a fair coverage, thus the history of development can be traced by the reader and the improvements implemented in stages in the optical systems as well as in the readout technology using digital technology is clearly explained.

The treatment of GNSS is excellent. Starting with simple examples, the reader is led through the complexities at each step in position location using GNSS. The illustration are excellent and the section on geoids, ellipsoids and datums should be of use to geography students in general. Beyond the basic theories, errors and corrections, the chapter also discuss thoroughly the concepts of DGPS, SBAS and applications in location based services, and other applications. GPS instruments and their operation is also adequately covered.

The final chapter on using UAVs for surveying actually covers much more than just the survey. Starting with aerial surveys in general, the chapter extensively covers different types of UAVs, their classification, sensor payloads and the position UAV surveys in the field of aerial surveys in general. The issue of multiple image registration is discussed in conventional photogrammetry terms as well as using new techniques like Structure From Motion and SIFT algorithm. The planning of a typical UAV survey is covered in detail from initial preparation to detained planning and execution.
The book is well produced with excellent illustration and diagrams to support the text. A good addition to a surveyor’s library.