Introduction
The Sunderban region is located between 21deg 32 MIn.latitude & 22deg.40Min. attitude north and between 88deg.&05Min.and 89deg.longtitude east and Constitutes the watermost part of the gangetic delta. 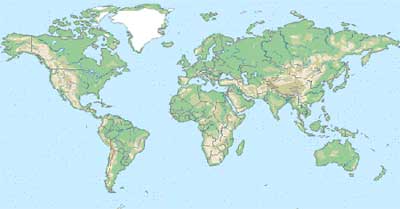 Bio-spheres Reserve throughout the world
The region is demarcated by the river Hoogly on the west, the Bay of Bengal on the south, the Ichhamati-Kalindi-Raimongol rivers on the east. It comprises nineteen blocks of north & south 24-parg. Districts of West Bengal.

There are 54 islands in this region. The land area measures about 9629 sq.km. of which 4493 sq.km inhabitated by people and the rest is reserve forest. The total number of mouzas under the region is 1093. major ecosystem type is tropical humid forest, mangroves. habitat and land cover types are tropical semi-evergreen forest including mangrove such as avicennia albs, bruguiery gymnorrhiza, ceriopstagal, rhizophoraapiculataetc, agroecosystems, silviculture, pisciculture, prawn culture etc. water and soil characteristics of estuaries mechanism of situation in the tidal river system soil related problems and fertility of coastal soils and a wide diversity of flora, fauna and medicinal values of mangrove species, plankton composition and its population density also a very important issue for sustainable development. Socio economic status is mainly dependent on the fishery resources of sunderban.

There is a vast difference between the other bio-sphere reserve and sunderban, because it is world heritage site as well as largest mangrove area in the world. ecologically it is a very important place as well as it is under MAB(Man and Bio-sphere) project. Bio-spheres Reserve throughout the India

Major objectives of GIS application in Sunderban
Main object to create a GIS based data base for the following information’s To generate various reports for the management as a decision support system.

Methodology of the proposed conservation project
The development planning of such a vast area for identification of degraded stretches of sunderban requires various data information to identify the terrain, slope of the river, affected land areas in order to draw, on the block map and the bank of the river, the proper passage of channel to prevent loss of land as well as to maximize potential.

Implementation of GIS Application development with the Remote Sensing data (Satellite images), layering of Topo Survey data from Topo maps (1:25000 to 1:50,000 scales) available from the Survey of India and digitization of relevant block maps, as well as verification of draft contour maps in the field will only be able to prepare micro-distribution system within a short time and with more economy.

Use of Remote Sensing & Arial Image in Mapping All of the pictures received from remote sensing and which we view on the computer are 8-bit digital images, which means that they have 256 colors (2^8). The image in the right illustrates this principle. Digital images are tables of numbers, which in this case range from 0 to 255. The “bright” squares (called pixels) have high number values (ie. 200 to 255), while the “dark” pixels, have low number values (ie. 50-100). This image is an extreme close-up of a satellite image of West Hancock. The dark region is a stream valley, which has low reflectance, while the bright area is a gravel pit, which has high reflectance. The satellite sensor records the reflectance in its field of view, and then scales the signal to an 8-bit number (0 to 255).

Remote sensing is the science and art of obtaining information about a phenomenon without being in contact with it. It provides a unique perspective from which to observe large regions. Sensors can measure energy at wavelengths which are beyond the range of human vision (ultra-violet, infrared, microwave).

Compared to traditional satellite remote sensing IRS-1D also, provides significantly higher resolution. It has the ability to collect both panchromatic and multispectral images of the same object from the same perspective. The collected imagery can be output as one-metre pan-sharpened (color) and 4 metre multispectral (color). These images provide excellent accuracy for mapping surface of the earth. Remotely sensed images contain both spectral and spatial information. The spectral information provides various properties and characteristics about the surface cover at a given location or pixel (that is, vegetation and/or soil type). The spatial information gives the distribution, variation, and topographic relief of the cover types from pixel to pixel. Therefore, the main characteristics that determine a pixel’s brightness/reflectance and, consequently, the digital number (DN) assigned to the pixel, are the physical properties of the surface and near surface, the cover type, and the topographic slope. In this application, the ability to detect and map lineaments, especially those related to fractures and faults, is critical. Therefore, the extraction of spatial information from the digital images was of prime interest.

Cadastral Level Mapping is needed for this type of projects, which is only possible with Arial Survey. We can create 1:10,000 level map with the help of this survey.

The Satellite Remote Sensing data has proved to be a highly reliable for extracting the land use, land cover, the river and its bank etc. of any region in a given time and also in a cost effective manner due to their inherent capability of providing very high spectral and radio-metric integrity and consistency. Due to these capabilities satellite remote sensing also facilitates rapid but accurate changed detection studies which also forms an integral components of environmental impact assessment and to site a location for sustainable developmental growth of the entire conservation area.

GIS in land mapping:
With GIS techniques, maps are produced that are similar in appearance to hand-drawn maps; to the eye, each elevation map may appear not to conflict with the elevation maps of other stratographic units. However, to develop a truly internally consistent set of maps, the maps are processed into a raster (gridded) format. Then, conflicts in elevation between horizons (and larger conflicts across several horizons) detected in reference to block maps. The Topo survey maps always provide some benchmark and are therefore very useful in contour preparation either manually or electronically. Topographical maps of India made by Survey of India were started more than hundred years ago. Since then the land information is based on the Topo Maps of Survey Of India for various purpose. But there is some constraint in Topo maps as information is little bit older. So Topo Maps could be very helpful to read with the Remote Sensing Images, which is today’s scenario. Now, it is needless to say that anyone can derive contour maps at various intervals from various Topo maps at various scales. According to Survey of India 10m, 20m and 30m interval contour data are available from 1:25000 and 1:50,000 scale maps

Digitized block maps provide the necessary frame of the map to be drawn and also help in physical verification in the field for the errors that might occur inspite of high precision of the imaging. In mapping a terrain especially when in plane it is highly possible that errors may occur in defining the slope and elevation through imaging. On the other hand reliance on entire manual process may also lead to error due to failure of estimation through human eyes.

Creating a Vector Map
For creating a vector map we create three products: a three-dimensional perspective view, an elevation map of the upper surface, and a thickness map. Mapping of each unit was an iterative process that, through re-examination of stratigraphic data and maps, gradually refines the understanding of the vertical and lateral distribution of each unit. To map a unit, we should plot the stratigraphic control data, then prepare a hand-contoured map based on the data and an understanding of the regional distribution of the materials and geologic history.

Consideration in Micro Level Planning
Micro level planning with MIS with GIS Application is to visualize upto block level data, various related information, and contour maps at layout plan of Sunderban area. But for execution or implementation of a project planning, detailed information about drawings/maps are required to work at ground level.

To prepare a detailed map of layout plan of Channels at each block level, the following tasks are required to be carried out .

Preparation of Conservation Plan
In order to prepare authentic base maps, a pre – requisite to any Conservation Plan, the use of Satellite images in conjunction with contour maps are essential planning task, which has been addressed here.

Information available from Topo maps are as follows:

A GIS based approach can merges nature conservation, buffer zone development and participation of local communities in the management of large areas in the Sunderban area. Projects on integrated conservation and development can establish along the line of Biosphere reserve model. Other important aspects are to collaborate with local communities, improve the conditions for the local population and work for sustainable development. This model can initiate and promote approaches to education, training, research that integrate ecology, economics, technology and social development.

Consideration in Micro Level Planning
Micro level planning with MIS & GIS Application is to visualize upto block level information, data, and contour maps on layout plan. But for execution or to implement a project planning, a detailed information and drawings/maps are required to work at ground level. To prepare a detailed map of layout plan of Micro ploanning at each block level the following tasks are required to be carried out .

Conclusion:
Computer mapping requires two types of databases interacting with each other. One is cartographic database showing, for example, coast lines, administrative boundaries, roads, rivers, location and shape of houses and buildings. The information sources for acquiring these types of data are satellite and other remote sensing data, existing maps, and land survey data.

The other database is an attribute or thematic database. It may include the names of places and buildings, statistical data such as demographic information, land use classification, and others. These types of data are supplied in various forms such as printed statistical reports, digital tape data, or cd- rom.

The advantages of computer mapping are the reduced time and costs of data updating and management. Initial data creation and input to develop the geographic database requires long hours of work. We have researched the latest equipment and technology available to produce a workflow system for higher efficiency and improved accuracy.

In order to acquire data directly from satellite data, we use a suite of various hardware and software components to operate systems: such as high-resolution precision photo-scanner and soft-copy-ortho-photo mapping system. Other software and hardware components control digitizing tables used to convert existing paper maps into digital form. Other systems process land survey data from gps and total stations, which collect land, survey data. Original image enhancement and geometric correction of image data are performed with the aid of an image processing system to meet requirements in the latter phase of mapping works.