1 Digital and satellite revolutions in map updating
For a long time, and often until now, the updating of topographic maps was an analogue process requiring heavy aerial campaigns and time-consuming human processing. It explains why, in a lot of countries and especially the poorest, the updating of current maps can not be done, and as a result the lack of recent topographic information is a barrier for the development of these countries. It is usually assumed that less than a third of emerged land all over the world is mapped with fairly recent topographic maps: consequently, the need in map updating is huge and urgent.

After the digital revolution and the beginning of computer-assisted map processing, geographic information entered a new era a few years ago: with the arrival on the public market of very-high-resolution digital satellite images, what I call the Satellite Revolution, which in theory allows high-scale maps of everywhere to be made while remaining seated in one’s office. This revolution in geographic information is in fact a combination of many factors such as increasing powerful computers at a cheaper price, more and more efficient processing software, the availability of very-high-resolution satellite images as mentioned previously. The result of this convergence of positive facts is a number of mature cartographic solutions to update existing maps rapidly and cheaply. Spot Image and the French Mapping Agency (IGN) are promoting, through a partnership, these outstanding cartographic solutions for map updating.

2 SPOT 5: unrivalled benefits for mapping
In this developing new market for satellite images, SPOT 5 images have undoubted assets: the SPOT system is the only one which combines the essential properties for accurate and cheap mapping over a large area:

Space-triangulation consists in modelling together long SPOT data strips linked to each other through tie points. To compute an accurate and homogeneous physical model through the whole block of images, a few Ground Control Points (GCPs) are necessary, less than ten GCPs per data strip (6 in theory, more in operational situations to reduce GCP errors). These GCPs should be distributed at least at the beginning and end of each data strip. This allows some images having no GCPs at all to be modelled (see picture n°1) which is an undoubted operational advantage. The processing time is also much shorter than a single scene physical modelling which requires the same number of GCPs…but per scene: for instance, a block of 6 data strips of 10 images each, processed using space-triangulation, requires a minimum of around 36 GCPs (6 per data strip). With the same number of images but processed per single scene, it requires around 360 GCPs spread all over the block. This space-triangulation technique allows amazing processing time compared with traditional methods: a block of 250 SPOT images, covering a country of 400,000 km², was processed in around two weeks. The numerous tie points can be acquired, depending on the software, using automatic correlation tools with little human intervention.

The space-triangulation techniques used by Spot Image increases SPOT 5 absolute accuracy: a single SPOT 5 scene has an absolute planimetric accuracy (no GCP) through physical modelling of 50 m RMS. Through space-triangulation, the SPOT 5 absolute accuracy is averaged to 12 m RMS, an accuracy compatible with 1:50000 scale mapping (if relief is correctly corrected) obtained again with no GCP (but with a good DEM).

So the space-triangulation technique with the SPOT physical modelling potential is really an unrivalled mapping tool for large areas. 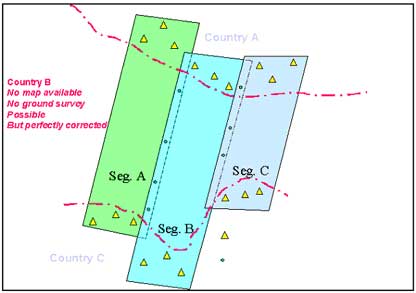 Picture n°1 : a block of SPOT images through space-triangulation ensures good geometry where no map is available (country B).   4 SPOT 5 accuracy
All satellite image providers announce impressive planimetric accuracy for their satellite orthoimages. The problem of this purely commercial approach is that it is not specified that such figures are reached only in some specific conditions, never experienced in operational situations. These specific but not revealed conditions are usually:

In other words, as soon as the user works with “normal” existing reference data, in mountainous areas for instance, using a commercial software, the geometric nightmare starts.

What one can say about the SPOT system, is that SPOT modelling can reach metric accuracy . The difference from a lot of other sensors is that this photogrammetric potential can be approached much more easily with SPOT in operational situations than with other systems, thanks to what we have seen above: rigorous physical modelling, well known by users and commercial software packages, raw image data and detailed ephemeris provided to customers.

In real situation, the orthoimage accuracy depends on the type of modelling but also on the accuracy of the reference data (a general case for any sensor). The main difference between the SPOT system and other ones is that the SPOT rigorous modelling allows to leverage the best possible benefit from poor existing reference data when other sensors’ modelling geometry diverge completely using the same GCPs and show their geometric modelling instability.

In practice, what is the accuracy of SPOT 5 orthoimages? The following chart gives the accuracy we obtain regularly in relation with the type of reference data used :

Situation n°1 and 2 are reassuring: with no existing ground data but “on-the-shelf” SPOT reference data, it is possible to get reasonable accuracy for our mapping purposes almost everywhere.

5 The Spot Image Reference3Dâ product
Reference3Dâ product is a world reference package, produced from SPOT 5 HRS stereopairs. This product has been designed and is currently produced in partnership with the French Mapping Agency (IGN) to guarantee the best possible accuracy. It contains an accurate DEM, an HRS orthoimage and some useful metadata describing the DEM quality. The main benefit of Reference3Dâ is to offer a good accuracy with no need for GCPs at all. Hence Reference3Dâ is available virtually everywhere .

The characteristics of this product have already been published by Spot Image, and can be rapidly summed up in the following chart:

These official Reference3Dâ accuracy requirements were fixed to cope with various landscape and extreme relief situations. In many operational situations, users have reported that Reference3Dâ accuracy is better than the above values, and that the “official” requirements give an under-estimated accuracy for a standard case. For instance, a test performed in July 2004 in Serbia shows impressive results: an HRG SPOT 5 image corrected using Reference3Dâ proved to be perfectly registered with the very accurate Serbian cadastre (see picture n°2). These results were confirmed over other areas by:

Both studies give the same type of results, stating that Reference3Dâ is in line with the above requirements.

As we will see below, these measures are really important to evaluate the advantage of using Reference3Dâ as a reference for SPOT 5 HRG images in a low-scale map updating context.

We have seen that SPOT5 HRG images have the geometric potential to reach easily the required planimetric accuracy. It depends now on the reference data. In any case, it is possible to reach these specifications using Reference3Dâ or the existing old maps themselves. The chart below shows the type of accuracy easy one can obtain using SPOT 5 images :

The altimetric specifications for mapping are required if one needs to generate missing contour lines. Although it is not exactly our purpose here – because the contour lines are supposed to be in the old existing map – it is a very important matter as soon as one wants to generate a new map. In that context, Reference3Dâ can be a solution :

The previous chart shows that one can easily find an operational technical solution to obtain a better accuracy than required for 1:25 000 or 1:50 000 mapping, or very close, using SPOT 5 images.

Requirements about the map content :
SPOT 5 2.5-m images potential for photo-interpretation and mapping at the scale 1:25 000 were tested by a Japanese company, PASCO, in 2003: during the test, operators tried to photo-interpret the main keys of a standard 1:25 000 map, to see if it is possible to identify them. The operators in this study put a mark according to the level of interpretation they were able to achieve for each theme:

The result of PASCO evaluation is the following :

In any case, like with aerial photos, some complementary field survey is necessary, especially for place name updating and for some specific data collection and control.
7 Map updating method and performance using SPOT 5
Line map updating is the key cartographic application which is now possible using SPOT 5 images with outstanding performance.

The methodology, developed by IGN in the 90s for lower scales, is the following: ã CNES, IGN, GDTA & A. Husseini
Picture n°3 : 1:20 000 scale map updating using SPOT 5 THX image (Beirut, Lebanon: from top to bottom, the old map (1973), the SPOT 5 image (2003) with over the black master film, and the updated map (2003).
The output of the process is a set of digital master films, ready to be combined during printing to obtain the updated paper map. The digital master films are available for the next updating a few years later. The picture n°3 presents a test done by IGN and GDTA to update a 1:20 000 scale map of Beirut (Lebanon): in the middle of the picture one can see the SPOT 5 image with one master plate over (the black one containing the main planimetric information). This showed how useful the Spot Image is, especially over areas where it is impossible to fly with a plane.

The performances:
In July 2004, IGN carried out map updating of a 1:25 000 scale map in real conditions in situ at the Serbian Survey (Vojnogeografski Institut – VGI – Belgrade) using a SPOT 5 THX image (merge between a 2.5-m Panchromatic image with a 10-m colour image). The results were the following :

8 Use of Reference3D to extract new maps
Reference3Dâ and SPOT 5 data are currently used as “foundation data” by several governments (including the French one) to extract vector maps at a 1:50 000 scale over areas which cannot be reached easily. The rough production principle, designed to minimize the cost of the source images, as well as the production efforts, is to divide the area to be mapped into several equal-density zones, and to affect to each zone a given source image: Reference3D orthoimage for the low density, SPOT 5 m or 2.5 m for the middle or middle+ density, and to keep the 1-m imagery (Ikonos, QuickBird,…) to the very minimum extent needed, over the very dense areas. This is done in the frame of multilateral production groups (MGCP, FDB,…) ãCNES, VGI, IGN, IGNFI 2004
Picture n°4 : map updating of a Serbian 1:25 000 map. 1- The old map 2- The SPOT 5 THX orthoimage 3- In violet, the new updated features 4- The updated map.
9 Conclusion
As a consequence of the Satellite Revolution, map updating of 1:25 000 or 1:50 000 scale maps is now an easy process to achieve, with moderate costs and rapid results. In this developing market, SPOT 5 data are precious because they combine and optimize the advantages of a good cartographic system (large field of view, excellent geometric properties, very high resolution) with the satellite advantages (revisit capabilities, worldwide availability). At the same time they offer global reference data packages to ensure the best accuracy. These new tools and techniques will probably definitively change the way we map our world.