Introduction
Many public-sector agencies require current, reliable data on urbanized areas. Updating geospatial databases at scales ranging from 1:10 000 to 1:250 000 stands out as one of the major concerns of agencies involved in land management. What they are looking for is an uncomplicated, economical system for detecting urban change and map updating. SIGMA0, a new geomatics system aimed at updating land-use maps in urban areas with RADARSAT-1 imagery, could be just what they need.

Current needs in urban areas
Having a good appreciation of the development that takes place in urban areas on a near-continual basis is a concern that is common to a wide variety of stakeholders. A few examples of the existing interests related to urban development are outlined below.

In many countries, few national government agencies if any at all, have a land-use management map for urbanized areas that cover large cities. When they do, the maps are in many cases outdated and thus do not show what has happened over the last five or even ten years.

Large cities, such as Bangkok or Kuala Lumpur, on the other hand, need to update their land use/land cover maps as often as possible so they can more closely monitor the rapid development that takes place within their jurisdiction and make better urban planning decisions.

Agencies that need to limit the rather costly acquisition of aerial photos used to closely monitor changes that have occurred in urban areas and particularly at the urban/agricultural fringe could make good use of a tool for detecting change which would enable them to better target their purchasing needs, thereby saving time and money.

Last but not least, mapping agencies could benefit greatly from a tool that rapidly and systematically detects changes that have occurred in the built-up areas in urban, peri-urban, and rural settings.

Radarsat: Useful data for map updating
Many are advocating the integration of satellite imagery into the process for updating geospatial databases. Unfortunately, there is still no automated, rapid, and effective method for detecting change.

The RADARSAT satellite offers a solution with images that have a resolution of 10 m and that are not affected by weather conditions. Aside from its characteristic speckle, radar images have a relatively simple structure and are sensitive to the presence of very high objects such as buildings. The appearance of new buildings on vacant lots is an undeniable change.

Sigma0: Practical and economical system for map updating
SIGMA0 is a geomatics system designed for updating urban land-use maps that is built on RADARSAT-1 imagery in fine resolution mode, which means a resolution of 10 m. It was developed by scientists from two leading universities in Canada and is being commercialized by Synetix Inc., a Canadian geomatics company, through financial assistance from the Canadian Space Agency and the Government of Quebec. SIGMA0 has two independent modules:

The remote-sensing module includes a series of algorithms for analyzing the RADARSAT image and automatically detecting changes. Interestingly enough, change is not detected by comparing images taken on different dates. In actuality, it involves only those sectors declared vacant based on the last land-use map available. This map serves as a guide in determining areas of change on a single recent radar image.

The second module uses the position of the areas of change detected as the automatic access key to a database of the territory using a user interface designed with MapObjects and Visual Basic. This interface provides the means for displaying and manipulating vector data (National Topographic Data Bases, assessment roll, cadastral data) and images (orthophotos). The user can use the data sources as often as he wants in order to establish, if possible, the nature of the changes and to produce change reports. Once the changes have been characterized, the map can be updated with the user’s geographic tools (geometry and attributes) and new maps can be produced as work progresses.

Conclusive Results
Tests carried out to date with SIGMA0 on the entire territory of the Montreal Urban Community (close to 4 000 km2) speak eloquently in its favor. The system detects nearly all new buildings on the vacant lots on the previous land-use plan or existing land-use map. The percentage of error does not exceed 1%.

b) Changes detected in the RADARSAT image ? Canadian Space Agency (1999)

c) The user checks the municipal assessment roll against the corresponding orthophotos on his computer. 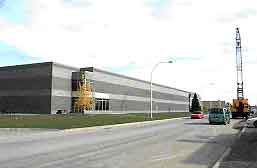 d) A photo of the site proves that there is a new building at the location indicated by RADARSAT.
References