Abstract
The main objective of the research project, entitled “Strengthening local authorities in risk management” is to develop spatial information systems for municipalities, which will allow local authorities to evaluate the risk of natural disasters in their municipality, in order to implement strategies for vulnerability reduction. The project concentrates on medium-sized cities in developing countries, which do not yet utilize Geographic Information Systems in their urban planning, and which are threatened by natural hazards. The methodology concentrates on the application of methods for hazard assessment, elements at risk mapping, vulnerability assessment, risk assessment, and the development of GIS-based risk scenarios for varying hazard scenarios and vulnerability reduction options, using structural and/or non-structural measures. In the development of elements at risk databases use is made of interpretation of high-resolution satellite imagery, combined with extensive field data collection, using mobile GIS. Here results are presented on earthquake loss estimation for the city of Lalitpur in Nepal, for buildings and for population losses.

1. Introduction
The recent tragic earthquake disaster in Pakistan is one of a series of events that severely impacts the fast-growing world population. It again demonstrates the lack of proper risk reduction measures, such as building codes, in most countries. Local authorities in cities are responsible for the proper management of the area under their jurisdiction, and the well being of the citizens, which includes an optimal protection against disasters. Since the International Decade for Natural Disaster Reduction in the 1990’s many initiatives have been launched worldwide to assess and reduce urban vulnerability, such as Risk Assessment Tools for Diagnosis of Urban Areas against Seismic Disasters (RADIUS, 2000), the Earthquakes and Megacities Initiative (EMI, 2002), and the Cities and Critical Infrastructure Project (Cities Project, 2004).

Due to the diversity and large volumes of data needed, and the complexity in the analysis procedures, quantitative risk assessment has only become feasible in the last two decades, due to the developments in the field of Geo-Information science.

In order to contribute to urban risk assessment in developing countries the International Institute for Geoinformation Science and Earth Observation (ITC) launched a research project with the acronym SLARIM, which stand for “Strengthening Local Authorities in Risk Management”. The main objective of this research project is to develop generic methodologies for GIS-based risk assessment and decision support systems that can be beneficial for local authorities in medium-sized cities in developing countries.

2. Case study city
The city of Lalitpur, which was selected as one of the case study cities in the SLARIM project, is located in the Kathmandu valley, neigbouring Kathmandu. Lalitpur has a population of 163,000, in 35,000 households, and is divided into 22 wards (see figure 1). 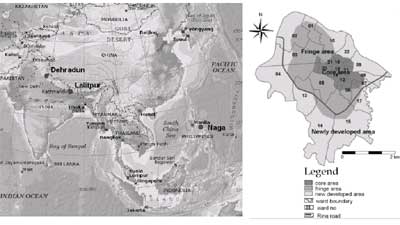 Lalitpur is located on a former lake in the middle Himalayan mountain range, of which the surface materials are mainly consisting of alluvial terrace deposits on top of a thick sequence of lake sediments, with a thickness up to 400 meters (Fujii et al., 2001). Various institutions have carried out studies on earthquake hazard and risk in Kathmandu Valley (UNDP, 1994; Dixit et al., 2002). This study used high-resolution satellite imagery, together with aerial photographs and field survey in the generation of a building database for seismic loss estimation in Lalitpur. An overview of the method is used is given in Figure 2.

Figure 2: Flowchart of the procedure for seismic loss estimation in Lalitpur, Nepal. See text for explanation.
3. Generation of the dataset
The Lalitpur Sub-Metropolitan City Office did not yet have a GIS section, nor did they have GIS data on the building stock and other characteristics within their municipality. A series of 1:2000 scale topomaps in AutoCad format were converted into a usable GIS database, consisting of separate layers for buildings, roads, contours and drainage. The building footprint map was prepared based on aerial photos of 1981 and 1992 and was updated in 1998. All the buildings constructed after this year as observed in the available IKONOS image from 2001 were digitized on screen to create the building data set for the year 2001. As also a CORONA image was available from 1967, this image was used to delete those buildings that were not yet present in 1967. The original digital building footprint maps did not contain any attribute information regarding the buildings within the city. Since a complete building survey would require too much time for field data collection, it was decided to use so-called homogeneous units as the basic mapping units within the city. In the field mobile GIS was used to characterize the buildings within each unit according to age (based on procedure outline earlier), occupancy class, landuse type and building type, which was a combination of construction material and number of floors. Population data were available from the latest population census in Nepal, which was held in 2001, published by the Central Bureau of Statistics (CBS) of Nepal. The average population density within different types of buildings (residential, commercial, institutional etc.) was estimated based on 196 detailed samples of buildings carried out by a local NGO, the National Society for Earthquake Technology (NSET) and the Lalitpur Sub-Metropolitan City Office. Based on these samples estimations were made of the population amounts present in different types of buildings during different periods of the day.

4. Soil response modeling
In order to be able to analyze the seismic hazard in Lalitpur and its surroundings a sub-surface database was generated for the Kathmandu valley. A geological database was made for storing the information for 185 deep boreholes, with depths ranging from 35 to 575 meters, of which 36 boreholes actually reached to the bedrock, and 328 shallow boreholes (< 30 meters). All boreholes were divided into main stratigraphical units, for which the depth was determined and used in GIS for subsequent layer modeling. In this case, all sediments of the basin were divided into four layers (See Figure 3). The depth of each of the layer boundaries, including the surface elevation was used in GIS and Digital Elevation Models of each of these surfaces were obtained through point interpolation.

Figure 3: Left: Thickness maps of the three main material types in the Kathmandu valley. Right: Cross section based on the layer thickness maps.
The GIS layer models were used for one-dimensional calculations of the ground response, with the help of SHAKE2000, which is derived from the original SHAKE software, used widely for soil response analysis since 1971 (Ordonez, 2002). Three earthquake scenarios were selected in line with the ones used in the study by JICA (2002). The results were calculated as Peak Ground Acceleration (PGA) as well as spectral acceleration for frequencies of 5, 3 2 and 1 Hz. These values were later linked back to the sampling points and maps were obtained through point interpolation.

5. Loss estimation
For analyzing seismic vulnerability, the buildings in Kathmandu valley have been divided into a number of classes. The vulnerability curves used in the GIS analysis were derived by NSET-Nepal and JICA (JICA, 2002). For each MMI class and building type, minimum and maximum values are given of the percentage of buildings that would be heavily damaged (collapsed or un-repairable) or partly damaged (repairable, and available for temporary evacuation).

The earthquake intensity maps were used in combination with the building map and the vulnerability relations to calculate the range of completely and partially damaged buildings for each earthquake intensity. In figure 4 some of the results are given.

The number of casualties was estimated at homogeneous unit level for the three different earthquake scenarios mentioned earlier. The data used for this calculation were the population distribution for different periods of the day and within different occupancy classes, the building loss estimation discussed in the previous section and vulnerability and casualty ratios with respect to building damage. These casualty ratios were derived from the HAZUS methodology, which uses the widely accepted ATC-13 vulnerability curves (FEMA, 2004). With these relations, the number of casualties was estimated for the three different earthquake scenarios, and for both a daytime and nighttime scenario, with a different distribution of population over the various occupancy classes. 6. Conclusions
The results from the earthquake loss estimation for Lalitpur Sub-Metropolitan City in Nepal illustrates the urgent need to support local authorities in developing countries with methods to collect and manage information used for risk assessment in order to be able to implement strategies for vulnerability reduction and disaster preparedness. The collection of basic data is of prime importance, and should be carried out by staff from the municipality in collaboration with local institutions and the local communities. In the initial period of the project contacts with the Lalitpur Sub-Metropolitan City Office (LSMCO) have been established, and the results of the research was shared with their staff in a workshop. Also a user needs assessment was carried out, leading to the installation of a GIS center within LSMCO and basic GIS training of 12 of their staff. With LSMC a number of phases have been outlined, starting with the collection of base data and the development of a municipal database, leading to the integrated use of this data for various urban planning and management activities, including disaster prevention and preparedness. One of the priority areas for the application of the municipal GIS in the framework of vulnerability reduction is the development of a building permit issuing and control system.

In the framework of an EU project on Capacity Building in Asia using Information Technology Applications (CASITA), together with the Asian Disaster Preparedness Center (ADPC), the research outputs have also been converted into a GIS case study, using a public domain GIS system (ILWIS, 2005). The text and GIS data can be downloaded from the project website: https://www.adpc.net/casita/introduction.html

Acknowledgements
We would like to thank the MSc students that have been involved in the studies in Lalitpur: Umut Destegul, Birendra Piya, Jeewan Guragain , Rajendra Khanal, Ganesh Jimee, Jayaweera Somasekera, Mazharul Islam and Pho Tanh Tung, as well as our colleagues involved in the research in Lalitpur: Luc Boerboom, Mark Brussel, Paul Hofstee, Erik de Man, Lorena Montoya, and Siefko Slob. Also we would like to thank the staff of the Lalitpur Sub-Metropolitan City Office, the Nepalese Society for Earthquake Technology (NSET), the International Centre for Integrated Mountain Development (ICIMOD) and the Asian Disaster Preparedness Center (ADPC) for providing support to the SLARIM research team. More information on the SLARIM research project can be found at the following website:

The SLARIM project is one of the activities contributing to the programme of the United Nations University (UNU) with ITC on Capacity Building for Disaster Geo-Information Management (DGIM). More information can be found on: