August is usually a tense time for farmers in Bihar, India. Having sown crops in July, they eagerly await the arrival of rains to sustain them. But Bihar is a flood-prone state. All too often, heavy rains cause floods that wash away crops, leaving farmers with no food and no produce to sell to earn a living.

This year, however, more than 200 of Bihar’s farming households will be more relaxed. They are covered for flood damage to their crops by a pilot Index-Based Flood Insurance (IBFI) scheme launched by the International Water Management Institute (IWMI), with funding from the CGIAR’s Climate Change, Agriculture and Food Security (CCAFS) and Water, Land and Ecosystems (WLE) programs. If the floodwaters are sufficiently extensive, the farmers will receive compensation.

The initiative is part of the efforts by IWMI to use the latest remote sensing data, Geographical Information System (GIS) technology and computer modeling to benefit poor and marginalized farmers. The approach called as AgRISE (Agricultural Remote sensing Insurance for Security and Equity) seeks to provide all farmers, no matter how small, with the security that insurance can provide.

Improvements in agricultural productivity in developing countries are thought to play a key role in reducing poverty. Unfortunately, farming outputs remain poorly measured throughout much of the world, hampering efforts to evaluate and target productivity-enhancing interventions. By using high-resolution satellite imagery, together with field data collected from thousands of smallholder plots in India, IWMI has been able to not only estimate and understand yield variation at the field scale over large areas, but also monitor flooding. This data has helped to develop various insurance products to safeguard farmers’ outputs.

IWMI developed the IBFI for Bihar in collaboration with global reinsurer Swiss Re. The institute’s scientists first examined past satellite images to identify historic floods and prepare a flood-risk map. Villages in three locations were selected for the pilot; one in an area at high risk of flooding, one in medium risk and one with a low risk of inundation. A hydrological model was developed using 35 years of observed rainfall and discharge data from gauges. When contemporary rainfall data is input, the model is able to make predictions of where runoff will travel and collect. In other words, it can indicate where flooding is likely to occur.

In a survey, farmers from a few selected villages were asked about their recollections of floods that occurred in 2007 and 2013. Information that was collected from these villages on the depth and duration of flooding helped in validating the model. Also, gathered data on the levels of payouts made in those years helped to determine premiums at different levels of risk.

Once the IBFI was finalized and approved by the Insurance Regulatory Development Authority of India, IWMI partnered with the Agricultural Insurance Company of India (AICI) to enroll the farmers and implement the pilot. The scheme went live in July, with a total sum insured of around INR 5 million (approximately $78,000).

IWMI is monitoring the monsoon very closely. If a trigger water level is exceeded in the model, the scientists of the institute will use 10 m-resolution satellite images from the European Space Agency to verify the depth, duration and extent of the flooding, and to identify those farmers who are eligible for payouts.

Any compensation payments will be made directly to the farmers’ bank accounts. The insured period will extend until October 15, 2017, till which time harvest takes place. By this time IWMI would have also demonstrated the potential role that remote sensing data and modeling can play in supporting agricultural insurance schemes.

This is important as there is an increasing demand for this kind of product. Of $140 billion reported for damages in all economic sectors between 2003 and 2013, agriculture reports an estimated loss of $30 billion. Smallholders are particularly vulnerable to crop damage from extreme weather events, hence they stand to benefit greatly from affordable insurance products.

In February 2016, India’s Prime Minister Narendra Modi launched the Pradhan Mantri Fasal Bima Yojana (PMFBY — Prime Minister’s Crop Insurance Scheme), which aims for more than half of India’s farmers to have subsidized crop insurance within the next two or three years. The plan is that they will be covered for a range of disasters, including floods, drought, landslides and hailstorms.

Insurance company Bajaj Allianz approached IWMI for assistance with verifying claims made by farmers it had insured in Bihar under the PMFBY during the summer 2016 cropping season. For this, IWMI used satellite data to develop a ‘crop health card’. By examining historic satellite images and information on related yields, scientists were able to accurately predict crop health and yield from current satellite images.

This meant it was possible to identify when crops were not healthy or had been damaged. During August 2016 flood, IWMI was able to provide crop damage estimates for rice and maize across an area of size little less than Kanpur city. In total, Bajaj Allianz had insured 307,677 hectares of farmland; the company reportedly covered loss of approximately $34 million.

IWMI went on to provide the same service for Bajaj Allianz for the winter 2016 crop, this time across the three states of Bihar, Haryana and Telangana. The company has a $7-million portfolio of insured farmers across this area. The institute is currently monitoring the 2017 summer crop. If through satellite images it is detected that the health of the crops has deteriorated, Bajaj Allianz will be alerted so that the company can investigate the cause of the issue on the ground.

There is clearly a useful role for the intelligence provided by remote sensing satellites, both within the insurance sector and for helping to support government schemes such as PMFBY. However, for crop insurance products to be reliable, the underlying data needs to be readily available and robust. Developing IWMI’s IBFI, for example, required a high-resolution digital terrain model, observations from gauges on river levels and discharge, and village-level census data on farmer livelihoods.

New satellites are beginning to solve the resolution constraint. The European Space Agency’s Sentinel-2 sensor provides 10 m-resolution data that can be used to predict smallholder agricultural productivity with roughly the same accuracy as survey-based measures traditionally used in research and policy applications. And multiple ‘cubesat’ companies are now providing data at a resolution of 5 meter or finer for much of the world at a much lower cost than previously available. 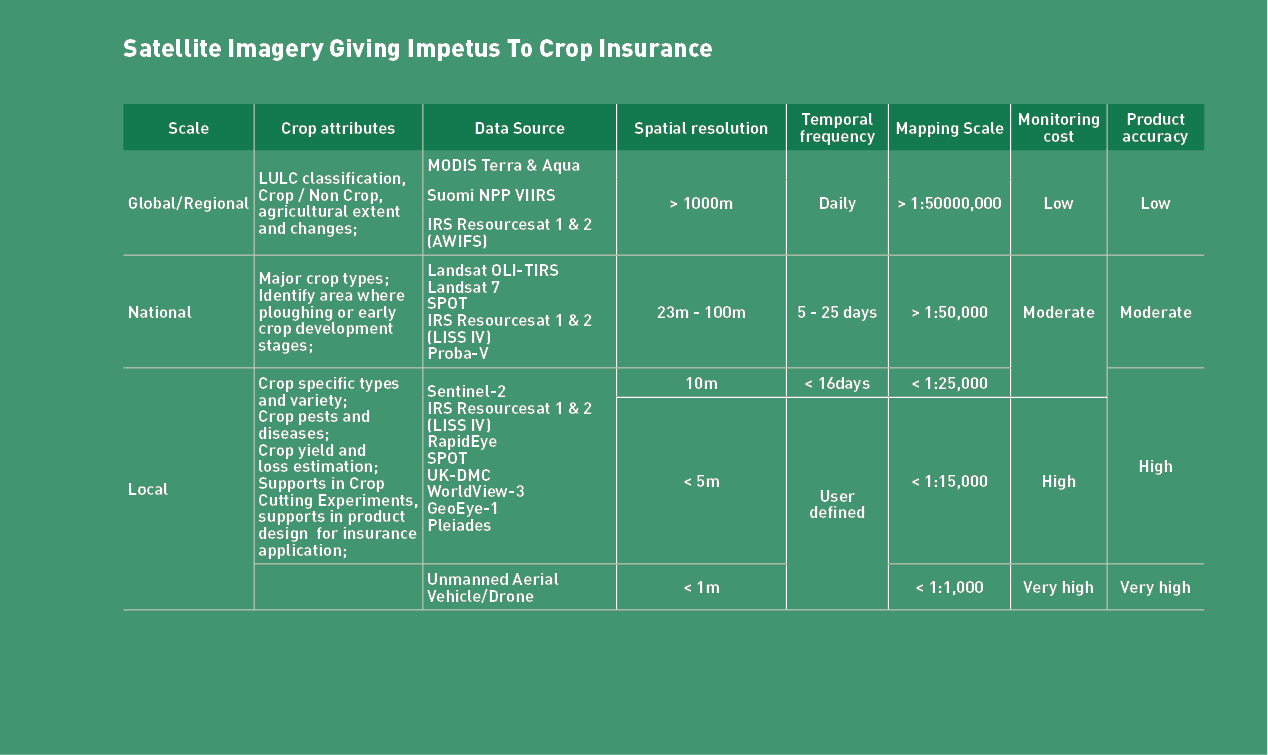 Scaling up pilot insurance schemes, so that they can cover several states or even countries will require data sharing between water resources, disaster management and agricultural coordination departments, both within states and potentially across state or national boundaries. Insurance products therefore have potential to promote cooperation between departments, states and countries, as well as between public and private sector organizations.

Around the world, governments and private sector can both benefit from successful large-scale public-private partnership insurance schemes. By building farmers’ resilience to climate shocks, governments will have a greater chance of reducing risk from disasters and promoting economic growth. This can help them meet global development targets, such as those laid out in the Sendai Framework for Disaster Risk Reduction 2015–2030 and the United Nations Sustainable Development Goals.

The private sector will gain from up-scaled agricultural insurance schemes, as they will have a much wider pool of potential clients to sell policies to. And the more people they insure, the lower premiums will be, so government subsidies can be reduced too. It’s a win-win situation.

However, the real beneficiaries will be the small-scale farmers, like those in enrolled in IWMI’s IBFI. For the first time, they will have peace of mind that their families will be OK, come rain or shine. If the harvest is good, they will be well fed and might make some money selling their surplus crops too. But even if they have a disastrous harvest, they will be able to pick themselves up and use their compensation to get by until the next cropping season comes round.

#LaunchAmerica a thumbs up for NASA’s commercialization efforts