<< Communication satellites have changed the way information used to be shared between the users. It is no longer about exchange of voice data but involves a host of other functions >> The use of satellites in communication systems is a fact of everyday life. This is evident by the fact that an increased number of houses are now equipped with antennas and dishes for reception of analog/ digital signal via the satellites. Communications satellite systems have entered a period of transition from point-to-point high-capacity trunk communications between large and costly ground terminals to multipoint-to-multipoint communications between small and low-cost stations. Since invention develops with the passage of time, satellite communication has also moved a step ahead from what it was in the past. This has happened due to several reasons such as frequency reuse, interconnecting many ground stations spread over the world, concept of multiple spot beam communications, and lasers which are effectively used these days for transmission through satellites.

Satellites offer a number of important features, which are not readily available with other means of communication. Some of them are enumerated below. 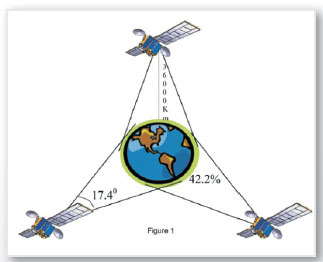 Figure 1
Basic components of communication satellite
Every communications satellite in its simplest form (whether polar or geosynchronous) involves the transmission of information from an originating ground station to satellite (the uplink), followed by a retransmission of information from satellite to the ground (the downlink). The downlink may either be to a select number of ground stations or it may be broadcast to everyone in a large area. Hence, the satellite must have a receiver and a receive antenna, a transmitter and a transmit antenna, some way of connecting the uplink to the downlink for retransmission alongwith prime electrical power to run all its electronics. The exact nature of these components will differ, depending on the orbit and the system architecture, but every communications satellite must have the basic components enumerated below:- Orbits of satellite
For providing communication links, the following orbits are preferred:-

Indian communication satellites
The Indian National Satellite (INSAT) system which is placed in geostationary orbits is one of the largest domestic communication satellite systems in Asia-Pacific region. Established in 1983 with commissioning of INSAT-1B, it initiated a major revolution in India’s communication sector. India’s space satellite system as on date consists of 24 satellites out of which 10 are in service (INSAT-2E, INSAT-3A, INSAT-4B, INSAT-3C, INSAT- 3E, KALPANA-1, INSAT-4A, INSAT-4CR, GSAT-8 and GSAT-12) India’s space satellite system with a total of nearly 175 transponders in the C, extended C and Ku-bands provides services to telecommunications, television broadcasting, weather forecasting, disaster warning and Search and Rescue operations.

Telephone: The first and historically most important application for communication satellites was in intercontinental long distance telephony. The fixed public switched telephone network relays telephone calls from land line telephones to an earth station, where they are then transmitted to a geostationary satellite. The downlink follows an analogous path. Improvements in submarine communications cables, through the use of fiberoptics, caused some decline in the use of satellites for fixed telephony in the late 20th century, but they still serve remote islands such as Saint Helena and Diego Garcia where no submarine cables are in service. There are also regions in some continents and countries where landline telecommunications are rare or nonexistent, for example, regions in South America, Africa, Canada, China, Russia, and Australia. Satellite communications also provide connection to the edges of Antarctica and Greenland. Satellite phones connect directly to a constellation of either geostationary or low-earth-orbit satellites. Calls are then forwarded to a satellite teleport connected to the Public Switched Telephone Network.

Fixed Service Satellite (FSS): Fixed Service Satellites use the C band and the lower portions of the Ku bands. They are normally used for broadcast feeds to and from television networks and local affiliate stations (such as programme feeds for network and syndicated programming, live shots and backhauls). These are also used for distance learning by schools/ universities, telemedicine applications, business television, videoconferencing, general commercial telecommunications and for cable telecast. Free-to-air satellite TV channels are also usually distributed in the Ku band.

Direct Broadcast Satellite (DBS): A direct broadcast satellite is a communications satellite that transmit signals to small satellite dishes (usually 18 to 24 inches or 45 to 60 cm in diameter). Direct broadcast satellites generally operate in the upper portion of the microwave Ku band. DBS technology is used for DTH-oriented (Direct- To-Home) satellite TV services. Operating at lower frequency and lower power than DBS, FSS satellites require a much larger dish for reception (3 to 8 feet (1 to 2.5m) in diameter for Ku band, and 12 feet (3.6m) or larger for C band).

Mobile satellite technologies: Initially available for broadcast to stationary TV receivers, popular mobile direct broadcast applications made their appearance in 2004, with the arrival of two satellite radio systems in the United States, the Sirius and XM Satellite Radio Holdings. Some manufacturers have also introduced special antennas for mobile reception of DBS television. Using GPS technology as a reference, these antennas automatically re-aim to the satellite, no matter where or how the vehicle (on which the antenna is mounted) is situated. These mobile satellite antennas are popular with news agencies and some recreational vehicle owners. Such mobile DBS antennas are also used by JetBlue Airways for DirectTV, wherein passengers in an aircraft can view television on LCD screens. Satellite radio: Satellite radio offers audio services in some countries, notably the United States. Mobile services allow listeners to roam in any part of the continent, listening to the same audio programming anywhere and everywhere. A satellite radio or subscription radio (SR) is a digital radio signal that is broadcast by a communications satellite, which covers a much wider geographical range than terrestrial radio signals, for example, radio channels of Worldspace.

Amateur radio: Amateur radio operators have access to a few dedicated satellites that have been designed specifically to carry amateur radio traffic. Most of these satellites operate as space borne repeaters and are generally accessed by amateurs equipped with UHF or VHF radio equipment and highly directional antennas such as Yagis or dish antennas. Due to launch costs, most current amateur satellites are launched into fairly low Earth orbits and are designed to deal with only a limited number of contacts at any given time.

Satellite internet: After 1990s, with the development in broadband satellite communication technology, it has become possible to access broadband internet through the satellite linkages. This has been a boon for users who are located in remote areas, and cannot access a broadband connection. Trends in satellite technology
Communications satellite systems have entered a period of transition from point-to-point high-capacity trunk communications between large, costly ground terminals to multipoint-to-multipoint communications between small, low-cost stations. With TDMA, each ground station is assigned a time slot on the same channel for use in transmitting its communications; all other stations monitor these slots and select the communications directed to them. By amplifying a single carrier frequency in each satellite repeater, TDMA ensures the most efficient use of the satellite’s onboard power supply.

A technique called frequency re-use allows satellites to communicate with a number of ground stations, using the same frequency, by transmitting signals in narrow beams towards each of the stations. Beam widths can be adjusted to cover areas as large as the entire United States or as small as Maldives. Two stations which are far apart, can receive different messages transmitted on the same frequency. Satellite antennas have been designed to transmit several beams in different directions, using the same reflector. The latest trend is the use of network of small satellites in low earth orbit (2,000 km or less) to provide global telephone communication. Special telephones that communicate with these satellites allow users to access the regular telephone network and place calls from anywhere on the globe. Anticipated customers of these systems include international business travellers and people living or working in remote areas.

The trend in GEO satellites is increased power and number of transponders. Satellites with numerous C and Ku-band transponders are becoming a common thing. These increases have not resulted in a proportionate scaling of the weight of these satellites, since the use of shaped antennas eliminates the need for considerable microwave plumbing and the use of lighter structures has helped contain the weight of the satellites. Nevertheless, GEO satellites are becoming heavier and launch capability is increasing to accommodate the additional features of modern satellites. Increased power is driven by the desire to decrease the ground terminal size and cost. The power subsystem is composed of the solar array (solar cells on the supporting structure including pointing devices), batteries, and the power conditioning electronics. While it has long been known that GaAs has an intrinsically higher efficiency than silicon, the difficulty in fabricating GaAs cells that are competitive in cost to silicon, has prevented large scale application in satellites.

Another promising solar array technology is the use of concentrators which focus the light down onto the GaAs cells. AEC-Able Engineering Co, Inc. of Goleta, CA is working on parabolic reflectors that gather 7-8 times the light that would normally fall on a cell. These reflectors would also shield the cells against the high energy particles that degrade them. Such a technology would offer the promise of reducing the number of cells and the weight and thus, the cost of the solar array. The key trends in spacecraft antenna technology are larger effective apertures, significantly higher numbers of beams, and integrating computationally-intensive beam forming and switching activities with other onboard processing functions. These trends are an integral part of universal efforts to raise spacecraft effective radiated powers (EIRP), make communications payloads smarter and more flexible, and make earth terminals smaller and cheaper. A tremendous amount of research is going on in micro-optics, optical memory, optical signal processing, and optical communications throughout the world. Diffractive optical components for use in free-space and bulk microoptical systems are being studied for optical communications, information processing, optical computing and sensor applications. These include high-efficiency blazed micro Fresnel lenses, high-efficiency chirped gratings, Bragg gratings, binary gratings, and arrays and their composites. Integrated optics technologies are expected to play an important role in the development of new devices for future optical memory systems. 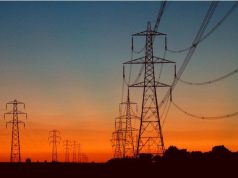 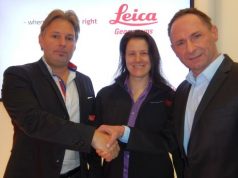