Remote Sensing: Down the memory lane…

Today, almost every country has an independent or collaborative programme in Remote Sensing. It is a technology, though expensive, no country can do without. It is not the cost of the technology, but rather the cost of not having it that matters. This article vividly portrays the birth, the growth and the present stage to which Remote Sensing has evolved as a technology for effectively monitoring our planet earth

Mankind’s desire to fly has been documented since mythological times. The ‘Pushpak’ flying machine mentioned in the Indian epic ‘Ramayana’, made by Maya, acquired by Demon King Ravana and then used by Lord Rama is part of Indian folklore. Since those ancient times, it has been only the select few who flew, got to experience a bird’s eye view or aerial perspective of the Earth.

It was only with the advent of ‘Photography’ that the pleasure and awe experienced by a select few ‘Aeronauts’ (Hot air balloonists) was shared by the general public. Foremost among those who realized the potential of this technology of ‘aerial photography’ was aeronaut Gaspard Felix Tournachon, who on October 23, 1858 applied for a patent for what we today call aerial survey and thus was taken the first small step towards the development of the technology, which has given the common man access to spectacular views of his planet in details which were unimaginable even a decade ago. Today we can view any part of the world with a ‘bird’s eye view’ without ever flying or being the fortunate few to view earth from space. Today satellite imagery is being utilised for purposes ranging from crop monitoring, cadastral mapping to advertising tourism destinations.

The term “remote sensing,” – first used in the United States in the 1950s by Ms. Evelyn Pruitt of the U.S. Office of Naval Research – is now as we all know, commonly used to describe the science-and art-of identifying, observing, and measuring an object without coming into direct contact with it i.e. even a simple portrait captured by a camera is a product of the process of remote sensing.

The history of remote sensing
It began with the invention of photography in 1839. As early as 1840, the director of the Paris Observatory advocated the use of photography for topographic surveying, and from that time balloon photography flourished. The Frenchman Arthur Batut pioneered the development of kite aerial photography. Kites were used to obtain aerial photographs from about 1882. The most famous kite photographer was American G.R. Lawrence, who used batteries of kites to suspend huge cameras for aerial views over cities. Kites are being used even today by hobbyists for obtaining aerial photographs. The next technological leap was to use rockets to carry the camera high up which later returned to the ground by a parachute. This was pioneered by none other than Alfred Nobel in 1897 when the first rocket photo was obtained over a Swedish landscape.

The technology of modern remote sensing began with the invention of the camera more than 150 years ago. Although the first, rather primitive photographs were taken as “stills” on the ground, the idea and practice of looking down at the Earth’s surface emerged in the 1840s, when pictures were taken from cameras secured to tethered balloons for purposes of topographic mapping. The zest for viewing the terrain as a bird would lead man to think of rather novel ways, since the first airplane was still to be successfully flown. In 1903 probably a few months before the success of the Wright brothers, Julius Neubronner from Germany patented a breast-mounted aerial camera for carrier pigeons. The results were not very spectacular, but it was still an attempt at aerial photography. 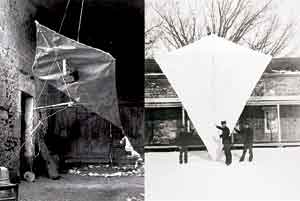 The Kite and Camera used by Arthur Batut (1890). Source: batutkite.jpg
Aerial Photography – The dawn of Photogrammetry
The airplane was invented in 1903 but was not used as a camera platform until 1909, when the first aerial motion pictures were taken during a flight by Wilbur Wright in Italy. With the advent of World War I, aerial photography became indispensable for military reconnaissance. By the First World War, cameras mounted on airplanes provided aerial views of fairly large surface areas that proved invaluable in military reconnaissance. The science of extracting quantitative data about terrain height, slope and dimensions of objects on ground using overlapping aerial photographs was perfected, giving birth to the field of Photogrammetry. From then until the early 1960s, the aerial photograph remained the single standard tool for depicting the earth’s surface from a vertical or oblique perspective. The greatest advances in aerial photography and photointerpretation came with the Second World War, and the majority of subsequent advances in the field were an outgrowth of military development. Today, digital aerial photography and digital photogrammetry are still unbeaten contenders for quantitative data extraction though Satellite remote sensing is more popular due to easy availability and low cost.

Aerial photograph of San Francisco bay taken by a camera attached to a battery of 17 kites obtained by George R Lawrence in 1906. (https://latteier.com/pigeoncam/) 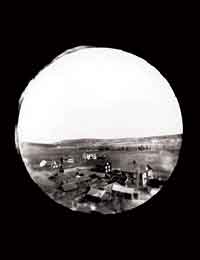 A Swedish landscape photographed by a camera on a rocket by Alfred Nobel in 1897. ) 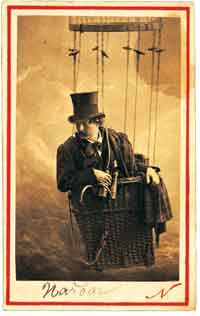