In any infrastructure project the broad stages are feasibility, design, construction and operations. This paper discusses the relevance of Geographic Information Systems (GIS) in a hydro-electric project (HEP) and highlights how GIS technology helps at various stages of the project lifecycle.

One key issue that is discussed is ways and means to maximize the return on investment (ROI) in a GIS. It is demonstrated that a fragmented approach makes investment in a GIS non-viable to any one player in the HEP concept-to-operations lifecycle. For fully leveraging the power of a GIS, a holistic approach is required, where the GIS is conceived, designed and initiated at project inception stage itself.

CONTEXT
In the current Indian scenario, many players are involved in the different life cycle stages of conceptualizing, planning, designing, executing and running a hydro-electric power plant. HCC has been researching the possibility of using GIS on some of its larger and more complex infrastructure construction projects, including HEPs. Preliminary studies show that the development and deployment of a large scale, data-intensive system such as a GIS demands large time-effort-investment. A party involved in just one of the life-cycle stages would not find it time and cost effective to invest in a GIS. A holistic approach is required, where the GIS is conceived, designed and initiated at project inception stage itself. At every stage of the project life cycle, the data then gets continually built up, until the operator is able to take over the GIS as an intrinsic part of the operational system

FEASIBILITY
The first stage of a project is the technical feasibility-commercial viability evaluation stage. A three dimensional digital elevation model (DEM) of the area of interest would help in evaluating the feasibility of a Hydro Electric Project (HEP). Designers would be able to obtain an overview of the terrain and assess the feasibility. Site suitability analysis becomes easier using the 3D analytical capabilities of a GIS. In addition, alternative sites could be identified and a comparative assessment done to select the most likely candidate. This assessment would take into consideration various parameters such as desired reservoir capacity, hydraulic head, cost of construction, accessibility, environmental impact etc. In addition to the main dam, HEPs have several components like the power house, control room, head race tunnel etc. The location of these, and the corresponding impact on the power generation potential of the HEP, can be assessed. HEPs, by their very nature, are in remote and mountainous areas which are difficult to access. Often, transporting the components of the project (turbines, gates etc.) constitute a significant challenge to the project executors. Factoring in these considerations could even have a bearing on the design or configuration of the project. A GIS that incorporates the road transportation network (load bearing capacities of bridges, turning radius of hairpin bends etc.) would allow the project designers to configure a system that is practical and cost effective.

Fig. 1 Tala Hydroelectric Project in Bhutan in the construction of which HCC played a part

Using ancillary information such as rainfall data, snow melt water flow, it is possible to estimate how much water would be available for impounding. Based on these and other relevant parameters, the size of the HEP (termed as mini, small, large and mega) could be decided. There are several conflicting opinions on whether several small projects are better as compared to a single mega project. Using the DEM, slope variations, catchment area, potential power generating capacity, R&R impact etc., this choice can be made and substantiated with quantitative estimates.

Geo-technical investigations are then undertaken to establish the nature of the subsurface rock formations. The most commonly used method is the study of core logs. The profiles derived from the core logs can be incorporated into a GIS and a three dimensional model of the sub-surface stratigraphy can be created. This visual representation makes interpretation of the core logs far more intuitive and reliable.

Often remote sensing satellite images and/or aerial photographs provide supplementary information to geo-technical investigations. Surface lineament mapping is one such aspect which gives a priori knowledge of the possible location of faults, joint planes etc. They also help in geological mapping before undertaking field-based ground truthing. Another contentious issue is the rehabilitation and resettlement (R&R) of Project Affected Persons (PAP). GIS and remote sensing data helps in identifying alternative sites which offer similar environmental conditions so that the PAP can be relocated with marginal adverse impact on their traditional means of livelihood.

DESIGN
Although GIS is not directly used in the design process it can still prove a useful tool. Some design softwares such as Autodesk Civil 3D and HEC-RAS are able to import and use data from a GIS. In reverse, CAD-based drawings of the HEP can be imported into GIS and a realistic 3D model of the project can be created. Further, the project can be geo-referenced to the GIS map thus giving an “in situ” representation of the final structure. Using the DEM the capacity of the reservoir can be calculated and corroborated with the desired results.

River analysis, before, during and after project construction is very important. It needs to be done at the time of feasibility study as well as during design process. With GIS data it is possible to simulate different flood conditions (Fig 2). This helps the planners and the designers to plan and design a project which has the remotest possibility of failure. 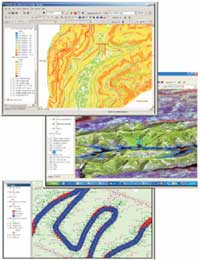 3D models of all structures associated with the dam can also be created (Power generation station, control room, head race tunnel, switchyard, security outposts, labour colony etc.). Thus, using the 3D capability of GIS, a virtual model of the entire project is made possible. This can be used to assess the aesthetic appeal of the design, as also to feed into further decision making such as planning access to the project site.

Accessibility analysis is another important aspect of the design. Once the project site is finalized, access roads have to be designed. The gradient of the road is influenced by the nature of heavy equipment that will have to be transported to the project site. Designing of road alignments is facilitated by using the DEM to compute slopes and elevations. Another big advantage of using a GIS is the ability to calculate the cut and fill for road alignments and thus a planned strategy for removal of the earthwork. (Fig 3) GIS is particularly useful in tracking the progress of land acquisition. The survey and revenue records in the form of digital maps can be imported into the GIS. The attribute data of each parcel of land can be populated with extensive information on land owner, previous owners, area, price of acquisition etc. This digital database provides the required information as frequently as needed. 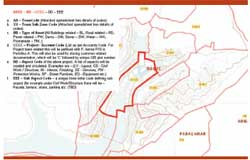