1839 The world’s first commercially manufactured camera, the Giroux Daguerreotype Camera, was designed by Daguerre and manufactured by Alphonse Giroux, Paris, France. It had an original list price of $50. It used a simple 15 inch f/15 achromatic landscape lens (a lens that is designed to limit the effects of chromatic and spherical aberration). The daguerreotype camera produced an image of 6½ x 8½ inches.
Image courtesy:www.geh.org/ fm/timeline-cameras

1846 The Carl Zeiss company, a German manufacturer of optical systems, industrial measurements and medical devices was founded in Jena by Carl Zeiss, Ernst Abbe and Otto Schott. In 1902, Carl Zeiss was granted a patent for an invention (by Paul Rudolph), which became the most famous camera lens of all times: the Tessar®lens, having an initial aperture (“speed”) of f/6.3. It was redesigned by Ernst Wandersleb in 1904 as Tessar® f/4.5 lens. High-quality stereo lens pairs were part of the Carl Zeiss product spectrum at an early stage. For example, Paul Franke and Reinhold Heidecke used precisely paired 55 mm Tessar f/4.5 lenses in their first Heidoscope stereo camera as early as 1920. Another product was the 500 mm I.R. -Tessar® f/5 lens for aerial photography in the 30×30 cm format.
Image courtesy:www.zeiss.com

1849 The Brewster Stereoscope invented by Sir David Brewster, a Scottish scientist, provided a template for all the future stereoscopes. The Brewster Stereoscope, therefore, led to popularisation of stereo photography, which peaked around the early 1900s but subsequently went out of vogue with the increasing popularity of motion pictures (movies).
Image courtesy: https://auction-team.de/new_highlights /2002-09/0886.htm

1855 The first photo from a hot air balloon was taken by Gaspard Felix Tournachon, a Parisian photographer, using a wet plate camera. He took the photograph from a height of 80 metres above the earth’s surface.
Image courtesy:https:// www.ferris.edu/faculty/burtchr/ sure340/notes

1867 The father of architectural photogrammetry, Dr. Albrecht Meydenbauer, designed a camera, which had wide-angle lens with a focal length of 25 cm and a 30 x 30 cm image format. This camera already incorporated many features of metric cameras and hence, became the precursor to all the future photogrammetric cameras. In 1893, he became the first person to use the term “ 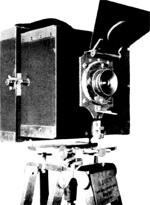 photogrammetry”. He was also the founder of the Royal Prussian Photogrammetric Institute and served as its director till 1909.
Image extracted fromwww. hasler.net /meydalb.htm

1888 George Eastman introduced the “Kodak” camera at a cost of $25 in the market. It came preloaded with an Eastman Celluloid film that could take 100 photographs. Hence, Eastman caused a revolution in the photography industry by bringing photography into the hands of the masses. George Eastman had earlier founded the Eastman Kodak Co. in 1881.
Image courtesy: . org/fm/ timeline-cameras

In 1906, one of the greatest earthquakes of all times hit San Francisco, USA on May 18. Oblique aerial photographs of the large-scale destruction and subsequent fires brought on by the quake were taken by George R. Lawrence five weeks later using several large kites. The kites were used to lift a huge camera (49 pounds) with which he took some of the largest exposures (about 48 x 122 cm or 18 x 48 in.) ever obtained from an aerial platform.
Photo courtesy : Harry Myers and extracted from