Public health and health care are important concerns for developing countries and access to health care is a significant factor that contributes to a healthy population. In response to these issues, the World Health Organization (WHO) has been working in collaboration with a number of academic institutions in Australia, Switzerland and Canada on the development of methods and models for measuring physical accessibility to health care using several layers of information integrated in a Geographic Information System (GIS). Two products have resulted from this work: AccessMod© and MAPA. An outline of these two products is presented here, specifically emphasising the transition from modelling the geographic extent of catchment areas using an isotropic function to the use of an anisotropic approach.

Background
Access to health care is an important component of an overall health system which has a direct impact on the burden of disease that affects many countries in the developing world. Measuring accessibility to health care therefore contributes to a wider understanding of the performance of health systems within and between countries which facilitates the development of evidence based health policies.

The use of Geographic Information Systems (GIS) for the measurement of physical accessibility is well established and has been applied in many areas including retail site analysis, transport, emergency service and health care planning (e.g. Wilkinson et al 1998, Albert et al 2000 and Cromley & McLafferty 2002). In the context of health care planning, the ability of GIS to identify the geographic extent of a health facility catchment area, which corresponds to the area which contains the population utilising this facility, is a particularly important analytical capability.

A number of techniques have been used within GIS to analyse physical accessibility to health care. Within urban areas, the most common techniques involve a vector approach which relies on high quality road network information, shortest path and route optimisation algorithms and incorporates the concept of ‘competition’ between the many potential health care providers. Over larger areas however, and in particular rural areas, raster GIS techniques are more commonly used as these approaches do not restrict ‘movement’ to just the physical road network and incorporate travel across the ‘terrain’. The most common raster technique for analysing movements across a continuous surface is the cost-distance approach (Longley et al 2005) which calculate the ‘cost of movement’ between two points adding the cost contain in each cell on the way. Such techniques are commonly found in commercial GIS products such as in the ESRI Spatial Analyst extension.

Depending on the mode of transportation that is considered, the travelling speed to the ‘nearest’ health facility may be significantly influenced by environmental factors such as slope and land cover. Measuring physical accessibility to health care using GIS therefore requires that the heterogeneity of the environment be taken into consideration in order to obtain results that are as close as possible to reality.

AccessMod 2.1 – modelling accessibility through isotropic movements
AccessMod© is an extension to ArcView 3.x (Black et al, 2004) and will soon be freely available from the

The current version of AccessMod© determines the geographic extent of the catchment areas, which corresponds to an accumulated cost surface, using the standard CostDistance function available in the Spatial Analyst extension for ArcView 3.x. (and also available in ArcGIS 9).

This CostDistance function is an isotropic algorithm, meaning that each cell within the cost surface used as the input grid to this function contains a single value representing the cost of movement across that location (cell) in any direction. In other words, the cumulative cost of movement, or the travel time, from a location A to a location B is equal to that from location B to location A. For some applications, this approach is adequate and an example of this would be the analysis of all-terrain vehicle movement where the magnitude of the slope is the key impediment to movement, rather than the direction of the slope.

At the root of the CostDistance function is a least-cost path algorithm, which assumes that the travel time from any location to the health facility is always obtain by travelling along the optimum route (in term of travel time).

The significant difference between the application of the CostDistance function alone and AccessMod© is the fact that the model also takes into account the following parameters when determining the catchment areas or proposing scaling up solutions (Ebener et al, 2004):

This information and data, as well as the distribution of the travelling time and location of the health facilities for the study area are necessary inputs for using AccessMod©.
Once the data and required information is integrated into an ArcView project the user is guided through a series of dialog windows within AccessMod© which allows the selection and input of all the model layers and parameters.

At the end of the process the user is provided with 3 new layers, namely:

Fig 1 Example of a catchment area extent obtained using AccessMod©. For this example the scenario included both pedestrian movement across terrain and vehicle movement along the road network.
MAPA – moving into the anisotropic world
Applications associated with pedestrian movement across the terrain often need to incorporate movement costs which vary with direction, referred to as anisotropic movement. In this case, the travel time between location A and location B is generally different than that from B to A. Such analysis takes into account the cost of movement from one location (cell) to each of the individual surrounding cells and thus, each cell has 8 “movement” costs associated with it.

In the context of modelling physical accessibility to health care, anisotropic analytical tools provide the ability to model the impact of slope on the movement of people across the terrain, which may be particularly important for analysing access to health care in areas lacking physical transport infrastructure such as roads and railways. In anisotropic settings, two levels of realism are added when considering slope indexes. First, the consideration of eight directional slopes for each cell avoids the problem of “hillside walking” which is encountered when computing the travel time along the same side of a mountain. With the typical isotropic approach, this travel time can be greatly overestimated, because the algorithm treats this special case as a continuous walk over steep slopes, as in reality the travel time is more similar to that computed on a flat surface. The anisotropic implementation avoids this problem by considering null slope between cells that are at the same altitude. Second, slopes are signed in an anisotropic context, i.e. different travelling speeds can be assigned to downhill or uphill movements. This is particularly useful as it is therefore possible to use a known relationship between the slope and the speed of travel for walking humans, the so-called Tobler (1993) function. This function is not symmetrical, which means that downhill movements are faster than uphill movements.

Another type of human movement that can be more realistically modelled in an anisotropic context is movement that utilises boats on a stream or river network, or in some cases a vehicle on a road network. In the river context, if the water velocity is significant, it is expected that travelling downstream will be faster than travelling upstream for the same boat speed. In the absence of field data on stream velocity (expected in the majority of cases), this velocity can be approximated by knowing the stream order and the slope of the terrain.

Anisotropic implementations of the cost-distance approach are not widespread. The IDRISI GIS product developed by Clark Labs contains an anisotropic cost surface function which can be used to models the effects of anisotropic frictions (costs) associated with movement across a surface. Similar capabilities (called surface-weighted distance functions) have been recently incorporated in version 9 of the ESRI ArcGIS software. The implementation of anisotropic analytical capabilities in IDRISI or ArcGIS, does not however, solve all of the conceptual issues associated with realistically modelling movement across terrain. In particular, these tools do not allow the inclusion of multiple anisotropic layers, in particular the inclusion of rivers as both a barrier to movement and a method of travel (via boats etc).

To allow for an easier and more flexible combination of landscape components impacting on human physical accessibility, we have developed the MAPA (Modelling Anisotropic Physical Accessibility) library, which is a C++ dynamic link library (dll) based on the open-source BOOST library (https://www.boost.org). The MAPA library, which is built in such a way that it can be linked to model such as AccessMod©, combines isotropic information from a land use layer with anisotropic information from both a Digital Elevation Model (DEM) and linear vector layers (roads, rivers).

Figure 2 provides an example of catchment areas computed in both an isotropic and an anisotropic context, using slopes and two types of land use as the landscape constraints to movements. In this example, a maximum travelling time of 180 minutes (between inpatient homes and the nearest health facility) has been set, and the anisotropic computation is such that all movements are modelled towards the health facility. A combination of slopes and land uses was used to compute the cost surface, and the health facility is depicted as a white cross. It is clear from the Figure that the overestimation of travelling time when only considering isotropic constraints results in a smaller catchment area than when considering anisotropy. 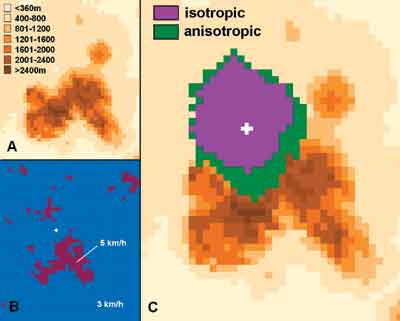 Figure 2. Example of isotropic and anisotropic catchment areas. (A) 1-km Digital Elevation Model (DEM) showing a mountainous area from which slopes are derived. (B) Land use map of the same area showing two different travelling speeds. (C) Isotropic and anisotropic catchment areas computed with ArcView CostDistance function and the MAPA model, respectively.
Conclusion
Despite the fact that it is based on an isotropic function, AccessMod© provides users with a tool allowing them to determine catchment areas around health facilities based on a large number of variables that influence the geographic shape and extent of these catchment areas. In addition, AccessMod© can already be used to produce figures to support evidence based policy assessment in relation to the coverage offered by an existing health facility network as well as proposing potential solutions for additional health facilities (scaling up) if necessary.

The preliminary results obtained with the application of the MAPA library suggest that the use of the anisotropic approach is producing significant differences (see Figure 2) when compared to isotropic techniques. Encouraged by these results the implementation of the MAPA library in the new version of AccessMod© is currently underway and will hopefully be released before the end of 2005. A large number of the activities associated with travel across terrain are affected by the anisotropic aspects of movement. Therefore, the potential offered by the MAPA library may in fact be far wider that just the modelling of physical accessibility to health care and may extend into many other application areas. In order to identify the particular contexts that this new library may be applicable, a review of other anisotropic functions actually implemented in commercial GIS software is underway.

Acknowledgement
The development of the version 2.1 of AccessMod© has been funded by World Health Organisation (WHO) with the contribution of the Networks of Centres of Excellence (GEOIDE), through a collaboration with the faculty of Medicine of the University of Sherbrooke, and the School of Mathematical and Geospatial Sciences of the RMIT University Melbourne.

The development of the MAPA library has been funded by the Networks of Centres of Excellence (GEOIDE), through collaboration with the faculty of Medicine of the University of Sherbrooke and the Computational and Molecular Genetics Lab of the Zoological Institute of the University of Bern.