Photobus is a mobile mapping system dedicated to the computation of the geometry of the road. Currently, the navigation and imagery data are semi-automatically processed with significant input provided by the operator. This paper describes major steps that move the Photobus towards a real-time mapping system

Road databases commonly use a linear referencing system (LRS) for a spatial description of elements of interest. A LRS is directly implemented on the road, with an origin and a set of marks painted on the pavement at each kilometre. Its use does not require an absolute localization of such marks, except for cartographic purposes. Most of the GIS applications now include a procedure for the dynamic segmentation of data that are referenced either in a LRS or in a national reference system. However, the road objects tend to be added using GPS-based positioning, which requires the description of the painted marks and of the centreline geometry in both systems to find the necessary transformation.

The acquisition of the needed transformation parameters initiated the design of a mobile mapping system by the Geodetic Engineering Laboratory of EPFL. Our system can be distinguished from its predecessors by its ability to georeference the road centreline through a vertically-oriented CCD camera (Figure 1).

Positioning using GPS-RTK
A crucial element of any mobile mapping system is registering the frame pixels in a global coordinate system. This process, known as georeferencing, is partially limited by the accuracy of the positioning and orientation components of the image (Zhang et al., 2003). The decade-old RTK technology has gained a wide acceptance in geodetic engineering and in public works. This technology is an extension of relative positioning based on the interferometric principle of exploiting precise carrier-phase measurements in real-time. The attainable accuracy is at the centimetre level provided that the integer ambiguities can be resolved and fixed (Liu, 2003).

In our context of a vehicle that is mapping the road centreline via a vertically-oriented camera, the positions of two GPS-RTK receivers and the derived azimuth provide efficient solutions under small banking angles (<4°). The underlying requirement for a successful RTK operation is the ability to transmit timely and reliably the reference station measurements to both rovers, where the integer ambiguity resolution is performed.

NTRIP
In the context of the European reference frame, the Federal Agency of Cartography and Geodesy in Frankfurt (Bundesamt für Kartographie und Geodäsie) has developed a real-time technique for the exchange of GPS data over the Internet (Weber et al., 2003). The method, named NTRIP (Networked Transport of RTCM via Internet Protocol), calls upon a substantial array of servers that allows the simultaneous connection of thousands of users (Figure 2). 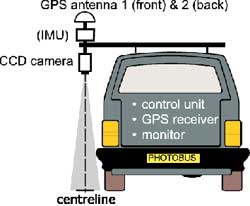 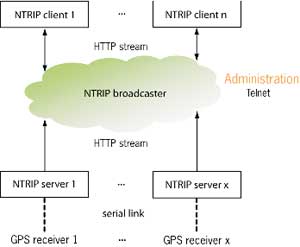 Fig 2: The NTRIP architecture
Page 1 of 3
Next