Abstract
In Asian countries with rapidly growing population and economy, there may be some possibilities of good shortage triggered by natural/human-induced disasters such as flood and drought. Monitoring agricultural production by remote sensing data is expected to by very helpful for providing country measures as early as possible. To explore the possibility of agricultural production monitoring on the real time basis, the authors examined changes o NDVI values of North Korea.

1. Introduction
In Asian countries with rapidly growing population and economy, there may be some possibilities of food shortage triggered by natural/human-induced disaster such as flood and drought. Monitoring agricultural production by remote sensing data is expected t be very helpful for providing countermeasures as early as possible. UNFAO is also making efforts to cover Asian regions with the network of “early winning system” based on remote sensing images. The objective of this study is to explore the possibility of early warning system based on satellite remote sensing data through the comparison of NDVI values of North Korea of 1992 and 1997.

2. Data Acquisition / processing
We use NOAA AVHRR data which we receive at Institute of Industrial Science, University of Tokyo and focus on the data acquired at three p.m. in August 1997 and 1992. For an analysis of the data we use PaNDA (Package for NOAA Data Analysis), free software, which includes radiometric correction and geometric correction. In order to remove the effects of the cloud cover as possible we made 10 day composite of NDVI image by choosing the maximum NDVI value over each 10 day at each pixels. The following formula is applied to the computation of NDVI values.

This formula has been used by UNEP-GRID(United Nations Environmental Program – Global Resource Information Database). Ch.1 and Ch. 2 respectively denote channel values of ch. 1 (visible) and ch. 2(near infrared) of NOAA AVHRR data. Flowchart of the data processing is presented in Fig. 2. Fig. 2. Flowchart of the data processing

Result
Fig. 3. is a map of Korea Peninsula. We assume low fat area is almost agricultural land in North Korea. Fig. 3. Map of the Korea Peninsula (conic projection)
(Copyright © Teikokushoin Co., Ltd.)
Fig. 4 and Fig. 5. is the NDVI image of Korea in Aug of 1992 and 1997. The data of 1992 have some noses in the northern part of the Korea Peninsula. Except these noises, we can see some changes, which indicate the decline of NDVI value, in the low fat area of North Korea. (darker area corresponds lower NDVI area on the gray scale). On the other hand, it seems that in South Korea almost all area maintains approximately the same NDVI value. (It should be noted that the NDVI values are low because of clouds in the east of South Korea.) 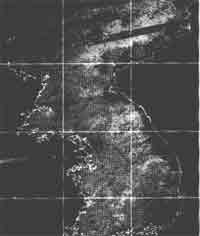 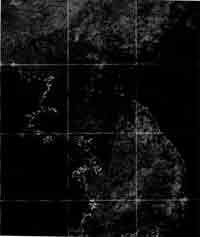 Fig. 5. NDVI image of Korea Aug/1997 (Mercator projection)
Conclusions and Future Prospects
In North Korea, relative higher NDVI values are observed in 1992 rather than in 1997, while South Korea almost all area keeps the same values approximately. We can conclude NDVI data from AVHRR data can be used for detecting relatively large-scale decline of agricultural production. The problem remained to be solved are

As we have mentioned the severity of these problems almost seem to depend on the data.

The following are further perspectives.