It is important to speak with users, go to user conferences, interact with users online and meet with prospective users before deciding what to include in a release, particularly a release as comprehensive as V8i. Bentley surveys the competition, talks to programmers and comes up with a matrix for the project.

The commonality among them is picked up — and that is what makes a theme. This is how top themes to describe various feature sets in MicroStation V8i have been decided, which fully leverage Bentley’s overall V8i interoperability platform.

In MicroStation, the surfacing tools were not particularly cohesive. The techniques that one needs to create a surface from a series of curves involve picking the curves in a certain order. Now when one picks a curve and decides that it is going to be the edge of a surface, MicroStation V8i highlights the direction that the surface is going to emanate from that curve. If it is wrong, you click on a curve and the arrow points the other way. The second issue with surfacing in MicroStation pre-V8i was that the surfaces created from these tools were not necessarily complete enough to become the edge of the next surface to be created. However, with V8i, one can take two surfaces and just push them together and the edges join automatically.

MicroStation has solids modelling tools: a features solids toolset and smart solids. But they were too complicated for the average user. The workflow wherein use of products like Google SketchUp and Rhino to do conceptual design, trying to take that from those other products, import it into Micro- Station, and then use it on the rest of the project is suboptimal. So in MicroStation V8i, a few very simple concepts called push-pull modeling were added. The idea is that one starts with simple forms like a slab and merely take faces or edges of the slab and push on them. This is very similar to SketchUp. One can create solid models that are in DGN format in MicroStation V8i and easily coordinate the work of someone who did not have much knowledge of MicroStation V8i with everything else that is going on in the project.

The dynamic views concept is a programming technique that can be used in many ways. Dynamic views addresses the issue of 2D versus 3D. It combines the best of 2D and 3D. What is 2D? It is merely a plane. If one throws a plane against a 3D model, planes do some simple things. They divide the world into three parts – the left of the plane, the right of the plane and the stuff that intersects the plane. If what’s on the right of the plane can be drawn one way, the left of the plane can be drawn a different way, and what intersects the plane can be drawn a third way, that is what we mean by dynamic views.
For a 2D user, that view looks a lot like a drawing spun inside a model. One can have more than one plane and therefore can construct drawings that are like cut-away drawings. It makes the process of creating the 3D model and understanding the 3D model much simpler.
This concept is implemented in Micro- Station V8i in a couple of ways. When one describes it in a building application, typically one is showing where the section plane intersects the building according to some pre-defined angles. But the way one manipulates the section plane when one is looking at the 3D model is to merely pick up a section marker that moves the whole thing. The other aspect of dynamic views is that these planes can actually cut 2D geometry too.

Dynamic views would not be quite as impressive if it were only a tool that one could use while in MicroStation V8i. What one draws using dynamic views has to also correlate with and get created in the output. When a PDF file is created from a series of dynamic views, all of the section markers have links to the other views that are exported to PDF. Take a step back and think about the workflows — now one can use 2D when one wants to but model in 3D in most other cases.

When it comes to geo-coordination, there is a similar problem of 2D versus 3D. In this case, it is the 2D coordinate systems that Bentley uses for maps and the 3D spherical coordinate system of the earth. In the beginning days of cartography, people used paper maps.
The paper now may be a 3D design file or have an orientation somewhere in a state coordinate system, but the coordinates transformed from the real world — latitude and longitude — to the Cartesian coordinate system is complicated. 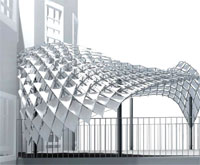 Everyone likes to design their buildings with their coordinate system aligned with the front of the building and the origin of the building. But when one attaches it as a reference onto a map, someone has to know where to put that in the world. Well, by

simply taking a few steps using a tool like Google Earth, one can get the longlat coordinates of the site and put that into the design file. Or by using a GPS receiver, one can input the information so that the building model has all the geo-coordinated information in it. A typical example of that is sending something up to Google Earth and allowing someone else to use your design in Google Earth, all geo-coordinated and geo-referenced together.

"MicroStation user became a second-class citizen though he/she had a product capable of doing that. To address this problem, Bentley licensed a rendering engine from Luxology for embedding in MicroStation V8i. Now it is as easy to create an impressive, photorealistic image as pointing and clicking a digital camera"

Plotting from an application like Micro- Station is not the same as plotting from Microsoft Word. One does not just do a File-Print. Instead, one creates print sets and those sets have to be referenced together. When changes are made to project, one needs to reissue the entire set as a single concept. MicroStation pre-V8i had some tools to do that — called batch plot – but they have been entirely replaced with Print Organiser.

With Print Organiser, one can dragand- drop the drawings that are going to be part of print set with a GUI interface using a file that is called a print-set file and MicroStation V8i will automatically create the references and attachments to show that. Then, by just using the MicroStation V8i print-set command, a full print set of the entire project can be generated.

MicroStation has had tools to create photorealistic output, but the workflows that involved exporting from MicroStation to some other pure rendering application added some inefficiency. So far, workflow also segregated the world into those who can render and those who cannot render. The MicroStation user became a secondclass citizen even though he or she had a product capable of doing that. To address this problem, Bentley licensed a rendering engine from Luxology for embedding in MicroStation V8i. Now it is as easy to create an impressive, photorealistic image as pointing and clicking a digital camera.

The speed is also impressive. Luxology can work on multiple cores and it has tools to export to formats like PSD files. This apart, the important aspect is that Bentley has not changed the file format or added features that forces retraining of operators. So on the gainversus- pain scale, MicroStation V8i is heavily weighted toward gain.